The pandemic has certainly tested our resilience, but for one alumna, it’s just another hurdle in a life filled with challenges. 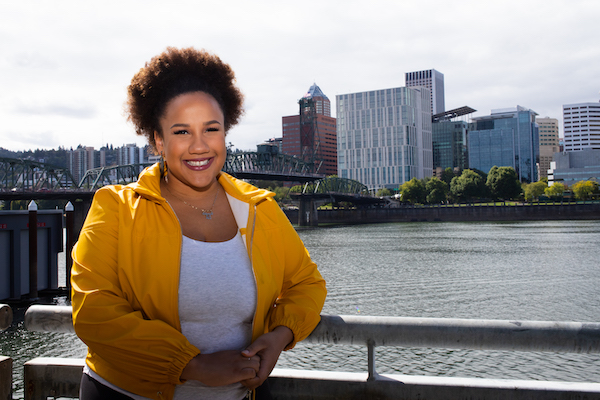 Three years after graduating from Pacific University, Wilson is the new executive director for Next Up, a Portland, Ore.,-based nonprofit that amplifies the voice and leadership of diverse young people to achieve a more just and equitable Oregon.

Before that she was the advocacy director for Coalition of Communities of Color and a community organizer with Stand for Children. Her work focused on educational policy work, community organizing and the needs of communities of color. Quite a rapid career trajectory for a recent graduate.

Those who knew Wilson at the Forest Grove Campus are not surprised. An education major, she was also Undergraduate Student Senate president and a member of the Black Student Union.

“Elona Wilson is a force. In the classroom she was an absolute powerhouse, consistently pushing herself to produce next level work that far exceeded course requirements,” said Politics and Government Professor Jules Boykoff. “And outside of the classroom she made things happen on campus and beyond. The way she embraces the complexities of politics and the nuances of political activism is so incredibly impressive. Elona is a leader through and through. The inimitable way she blends passion and smarts is precisely what this world needs right now.”

Wilson is fueled by critical hope — a method of grappling with the sometimes bleak realities of life, while maintaining a belief that things can change for the better. Critical hope helped her survive a chaotic childhood. Wilson grew up in homelessness and attended multiple schools. By eighth grade she went to live with a family from church with whom she stayed until college.

Wilson credits her support system at Franklin High School and Pacific University with keeping her on track for success. Some important scholarships, like the Phillip D. & Leigh Creighton Endowed Scholarship, also helped.

“It is because of my teachers and programs that have invested in me that I can end the cycle of poverty that has plagued my family."
—Elona Wilson ’18

“It is because of my teachers and programs that have invested in me that I can end the cycle of poverty that has plagued my family,” Wilson said. “I am thankful that I had the opportunities I did, and I deeply hope that these opportunities will be afforded to other students in the future.”

Although she isn’t a classroom teacher, educating youth is her passion. During the Black Lives Matter movement in the summer of 2020, Wilson marched alongside students speaking out against police brutality and structural racism. Wilson will continue to amplify the voices of youth at Next Up, where the focus is empowering primarily high school and college students through voter registration/education and leadership programs. Restoring voting rights to adults in custody, many of whom are young and people of color, is also a critical agenda item.

“Inmates are still citizens of our communities, and it’s important that they continue to have a voice. It’s unacceptable for us to take that right away.”

Hope for a better future. That’s what’s next up for Elona Wilson. ■