“My grandma took my dad, the oldest in the family, and basically said, ‘For your own safety, we’re going to get you out of town.’

They gave him a Triumph motorcycle and headed him north, because he had some relatives in the small town of Forest Grove. … That’s how our family got to Pacific.”

LeRoy Smith ’29 motorcycled his way to Forest Grove  from California as a teenager, escaping family conflicts  at home. In Oregon, he found his mother’s sister, her Congregationalist minister husband, and seven cousins. The clan had settled in Forest Grove to be near Pacific University.

LeRoy and his cousins marked the beginning of a three-generation legacy that includes at least 14 members of the extended Smith family in Pacific’s alumni roster. This spring, Myron ’60 and Jann (Chapman) Smith ’60, and their sons, Todd ’86 and Kyle ’89, sat down to share memories.

Myron, son of LeRoy, is the patriarch and storyteller. He delivers tales with a booming laugh — and just a whisper of myth.

“History is what the historians tell us it is,” he teases.

Arthur ’21 and Dorothy Jones ’26 were the first of the family to attend Pacific University, followed soon by their brother Francis Jones ’29 and cousin LeRoy. 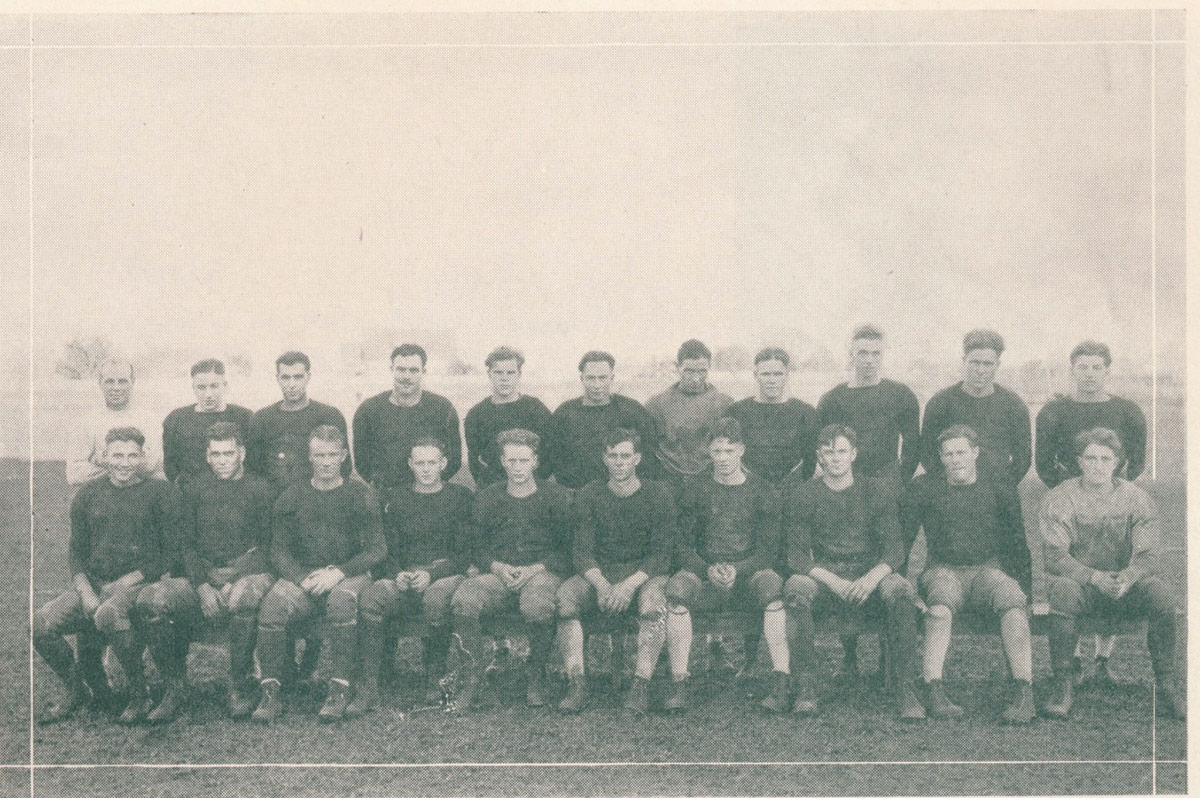 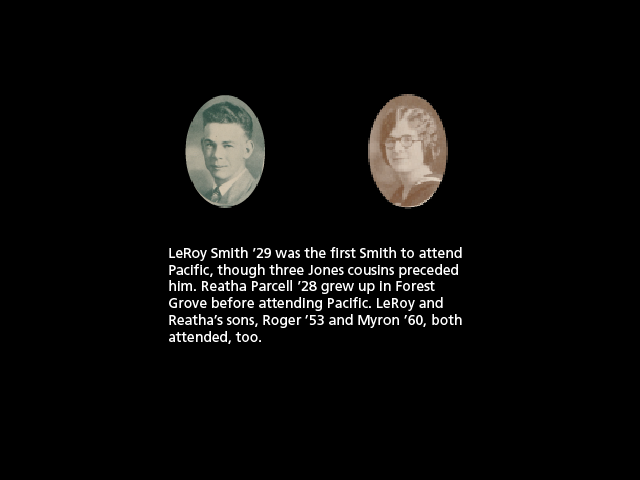 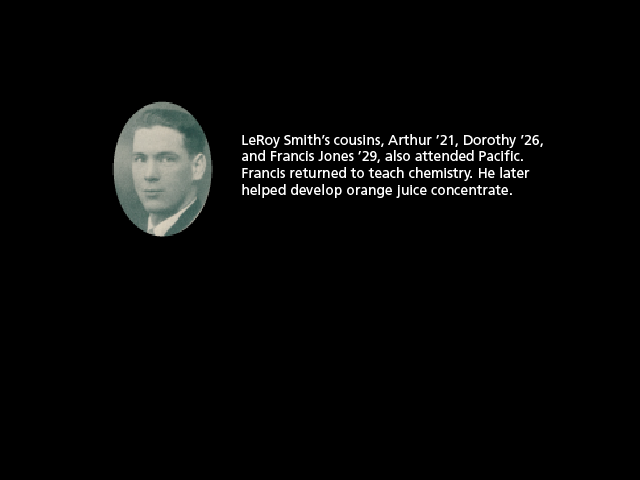 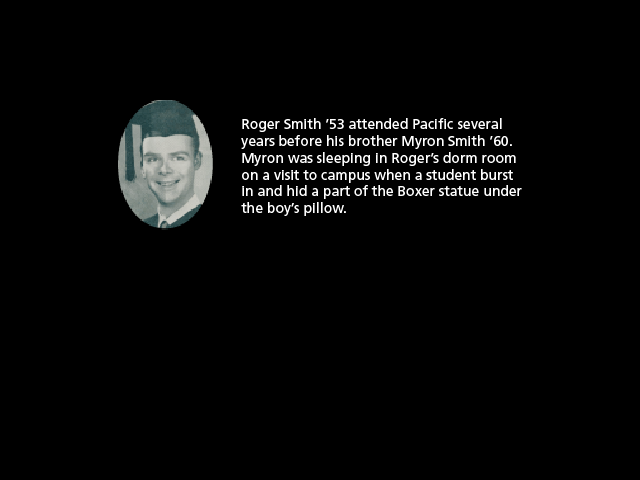 In 1928, Hal Chapman enrolled in Pacific, where he played football, but he transferred after receiving a scholarship to play elsewhere. He later introduced his stepdaughter, Jann Chapman '60, to the school.

LeRoy Smith '29 was the first Smith to arrend Pacific, though three Jones cousins preceded him. Reatha Parcell '28 grew up in Forest Grove before attending Pacific. LeRoy and Reatha's sons, Roger '53 and Myron '60, both attended, too.

Roger Smith '53 attended Pacific several years before his brother Myron Smith '60. Myron was sleeping in Roger's dorm room on a visit to campus when a student burst in and hid a part of the Boxer statue under the boy's pillow.

Francis was the first to gain notoriety. A chemist and geologist, he discovered a new mineral — jonesite, in his honor — and helped develop orange concentrate juice. He also taught chemistry at Pacific, sparking some family theories.

“There is a family rumor — we’ll just say that — that the chemistry writing on the wall in Old College Hall is Francis Jones’ handwriting,” Myron says.

Cousin LeRoy, meanwhile, left his own mark on the Pacific grounds. He was part of the crew that fashioned the concrete light poles that still illuminate the center of the Forest Grove Campus.

“They had a mold they hung in Old College Hall in the stairway,” Myron says. “They would carry the concrete up in buckets and dump it in the mold and let it set.”

LeRoy also built a local cabin that still stands to this day. Attempting to win over the father of fellow student Reatha Parcell ’28, he offered to help out on the Parcells’ property. Reatha’s father suggested he build a cover for the backyard fireplace.

“My dad never did anything halfway, so he built a cabin,” Myron said. “Dad apparently impressed him enough, because he married his daughter.”

The Parcell house and cabin are no longer in the family, but they still stand in Forest Grove — and for several years, the property was home to Pacific’s presidents, including Robert Duvall, who led the university when LeRoy’s grandsons Todd and Kyle were students.

On the other side of the modern-day Smith family were the Chapmans. Jann’s stepfather, Hal Chapman ’28, came to Pacific to play football. He stayed only a year, earning a scholarship to compete elsewhere, but he had fond enough memories to introduce his daughter to the campus.

“I was impressed,” Jann said, adding that the Congregationalist connection solidified her choice of colleges.

For Myron, the decision to follow his parents — LeRoy and Reatha — was little question.

His older brother, Roger Smith ’53, was a Badger (forerunner of today’s Boxers), and Myron had a choice of the University of California, Berkeley, or Pacific.

“My grades wouldn’t even come close to getting me into Cal,” Myron said. “We pulled enough [family connections] out of a hat, and Pacific said, ‘We’ll let you in anyway.’”

He laughs, self-deprecating, but Jann jumps to his defense: “Then he ends up getting a master’s degree. Shows them.”

A generation later, Todd and Kyle’s choices weren’t so apparent.

"My grandma took my dad, the oldest in the family, and basically said, 'For your own safety, we're going to get you out of town.' They gave him a Triumph motorcyle and headed him north, because he had some relatives in the small town of Forest Grove. ... That's how our family got to Pacific."

They grew up knowing the family tradition: “We went to Homecoming as kids,” Kyle said. “We just kind of grew up going there.”

Like many, the idea of some place newer and bigger beckoned.

“I took my final on a Thursday, I had to be in Forest Grove to register on Friday, and classes started on Monday,” he said. “I packed everything up … and I never went back ’til my kid went (to WSU).”

Kyle took an opposite approach: He started at Pacific, but transferred to Western Washington as a junior.

“I thought I wanted to go to a bigger school, a state school. Right away, I was just, ‘I made such a big mistake,’” he said. “I remember calling and saying, ‘I don’t like it here. I want to go back to Pacific.’

“So I went one year then transferred back to Pacific my senior year.”

Different, but the Same

In the 1920s and ’30s, when Hal Chapman and LeRoy Smith were students, there were all of about 200 students at Pacific. By the time their grandchildren, Todd and Kyle, were students, Pacific boasted about 1,200. Today, Pacific serves nearly 3,700 undergraduate and graduate students.

Lots has changed: McCormick Hall, where all three generations of Smith men lived, has been remodeled, and Jann’s early home in the Annex is gone. Living arrangements are definitely different.

“We had dorm hours,” Jann said. After they married, he served in the Coast Guard while she finished her degree. But he wasn’t allowed in her room after hours. “The dorm mother was really nice,” she said. “She would let us use her apartment.

“Then I wanted to move into married student housing by myself while he was gone, and they called my mother up to ask her permission!

“She said, ‘I don’t control my daughter’s life anymore!”

Boxer, too, is gone — though no account of Pacific lore would be complete without a sighting.

Myron was a child when he first saw the infamous statue — or at least, its leg. He was visiting his older brother when Boxer was flashed.

“I was up in (Roger’s) dorm. They’d put me to bed up there,” Myron said. “Someone came charging in and said, ‘Stick this under your pillow.’ I guess they thought no one would attack a kid.”

Jann snickered: “For Boxer, they probably would.”

Todd had his own encounter with Boxer II, the replica that was cast in the 1980s to replace the long-missing original. It was stowed in an equipment bag on the sidelines of one of his footballgames. The bag was carried out onto the field after the game for a team meeting.

“The word got out there was going to be a Flash,” Todd recalled. “The coach was talking, and the crowd was just getting closer and closer.

“Finally, the coach said, ‘No one get involved.’”

Todd went to the locker room and changed. The brawl was still going strong when he returned.

Boxer II is gone now, as well — but it’s the Boxer Spirit, the sense of relationship, camaraderie and care that seems to live in each of the Smiths’ memories.

They remember the professors who shaped their college years — Dr. Frank Chipps ’48 lecturing in a warm second-floor classroom, or Dr. John Roberts climbing on a lab table to deliver his infamous amoeba lecture.

They remember studying with friends at a neighborhood café: “We fought the Civil War over coffee and toast at the Tip Top.”

Now that football has returned to Pacific, Todd’s friends meet up to tailgate at games, and the family kicks around the idea of meeting up for Homecoming one day.

It was the year away — the experience at that big school he craved — that drove the Pacific difference home for Kyle.

“I had friends at Pacific. I knew people at Western, but I didn’t feel like any were my friends,” he said. “I didn’t realize the value of going to a small college.

“Everybody knew you; you weren’t a number.

This story first appeared in the Summer 2015 issue of Pacific magazine. For more stories, visit pacificu.edu/magazine.