First, Tim and Cathy Tran Survived. Then, in America, They Thrived 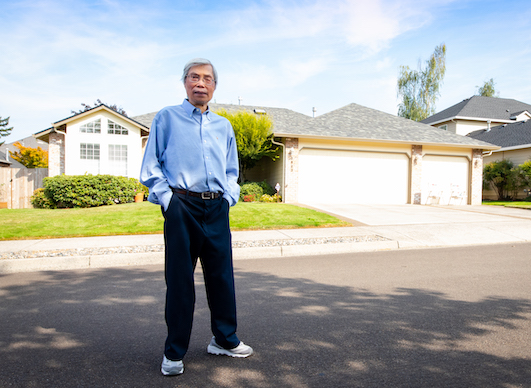 How marvelous is it that Tim Tran lives a comfortable retirement with his wife Cathy in Camas, Wash., surrounded by artifacts of a successful career as a financial officer and business executive.

In his office, he sits amid tributes like the framed cover of CFO magazine, which once featured him on its cover with the headline “American Dreamer.” But unseen in the background is the harrowing story that brought him to this point. Only in Hollywood, it might seem, could such a tale seem possible.

Hollywood, in fact, has something to do with helping Tran get from then to now, from peril to prosperity. Hollywood’s depictions of fearless antiheroes — specifically in the films Cool Hand Luke and Papillon — were on Tran’s mind during the lowest points.

Tim Tran never gave up either. Others did, but he couldn’t.

In 1975, many South Vietnamese citizens were traumatized when their government surrendered to the Communists from the north. Those who worked for the government, like Tran’s father, and for foreign companies, like Tran, lost their jobs. Most lost their savings when banks were seized and the old currency became worthless. Many lost their houses.

The lucky ones fled, and Tran, who had enjoyed a happy undergraduate experience in the United States as an exchange student at Pacific University and the University of California- Berkeley, became determined to do so, too.

That’s when the true tests of his resolve began. Four times he pursued plans to escape, and four times, the plans evaporated as predatory schemes became clear. Each failed effort cost Tran money, time and faith in his fellow humans. One attempt, further, cost his father’s life, when the people who promised to ferry them down a river instead disappeared with Tran’s father and returned carrying a bloodied knife. The criminals forced Tim and Cathy overboard, leaving them hoping to stay afloat while the boat motored away.

It was the darkest of days for Tran.

“To this day, I still think that, due to my mistake, my father was murdered,” Tran said in an interview from his home in Camas. Yet, he said, “somehow he was blessing me. He blessed me in my later adventures.”

Eventually, with resources nearly gone and hopes profoundly dashed, the Trans succeeded in boarding a ship packed with refugees that was bound across the Gulf of Thailand for Malaysia. But the journey in the crowded ship was interrupted seven times by pirates who boarded the ship, took all valuables, destroyed food and poured out water, and caused two deaths.

At one point, with the boat drifting on sharply reduced power, supplies gone and no land in sight, Tim Tran assumed his life had come to an end.

“I was ready to accept that this was my last moment,” he said. But in the next moments a cry went out: “I see mountains! I see land!”

Why didn’t he give up?

First there were the memories of the Newman and McQueen characters, who persisted in defying authorities, as Tran was defying the new communist government of Vietnam.

“Second,” he said, “I had nothing to lose. The worst is imprisonment or death. Like an American patriot used to say, ‘Give me liberty or give me death.’ I was ready to accept that.” 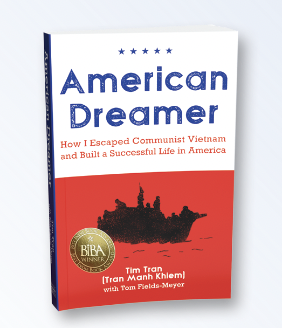 “An exceptional memoir. American Dreamer reminds us why the United States is a beacon of hope around the globe. Tim Tran’s book stirs the heart and reminds us of the sacrifices others make to become Americans. The rest of us would do well to sacrifice far less to help preserve the nation that has been good to us.”
—Les AuCoin '69, former U.S. Congressman, Ore.

Since Tran is here today, cradled by trappings of professional success, it’s clear his bravery, along with that of his wife, was rewarded in America. Their names grace the Tim and Cathy Tran Library on Pacific’s Forest Grove Campus. He is a member of the university’s Board of Trustees. And he is the author of an award-winning* 2020 memoir, American Dreamer: How I Escaped Communist Vietnam and Built a Successful Life in America, that details his journey.

He considers today that he has seen people at their worst and at their best. He said he especially appreciates the leaders of Pacific University, including President Lesley Hallick, Dean of University Libraries Isaac Gilman and others. 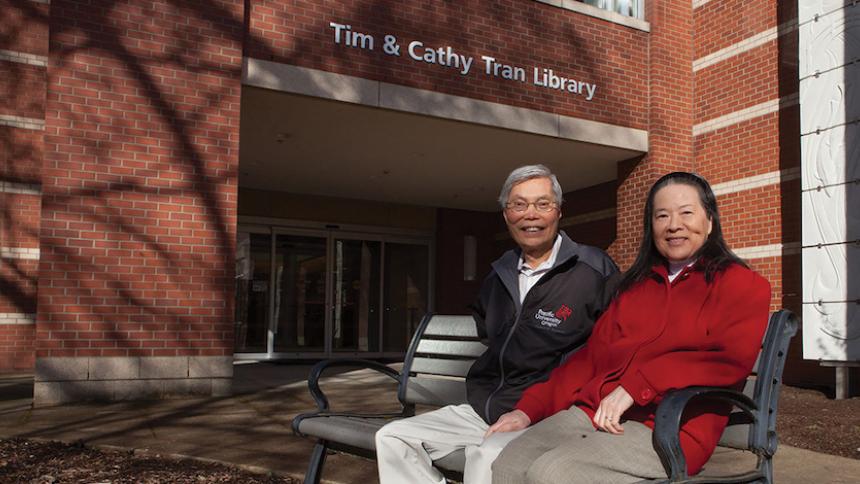 In 1970, Khiem "Tim" and Thuy "Cathy" (Trinh) Tran came to Pacific as bright-eyed international students. Less than a decade later, they were refugees. With the help of friends at Pacific, they made it— and today, the successful retirees are saying thank you with perpetual support for the university they love.