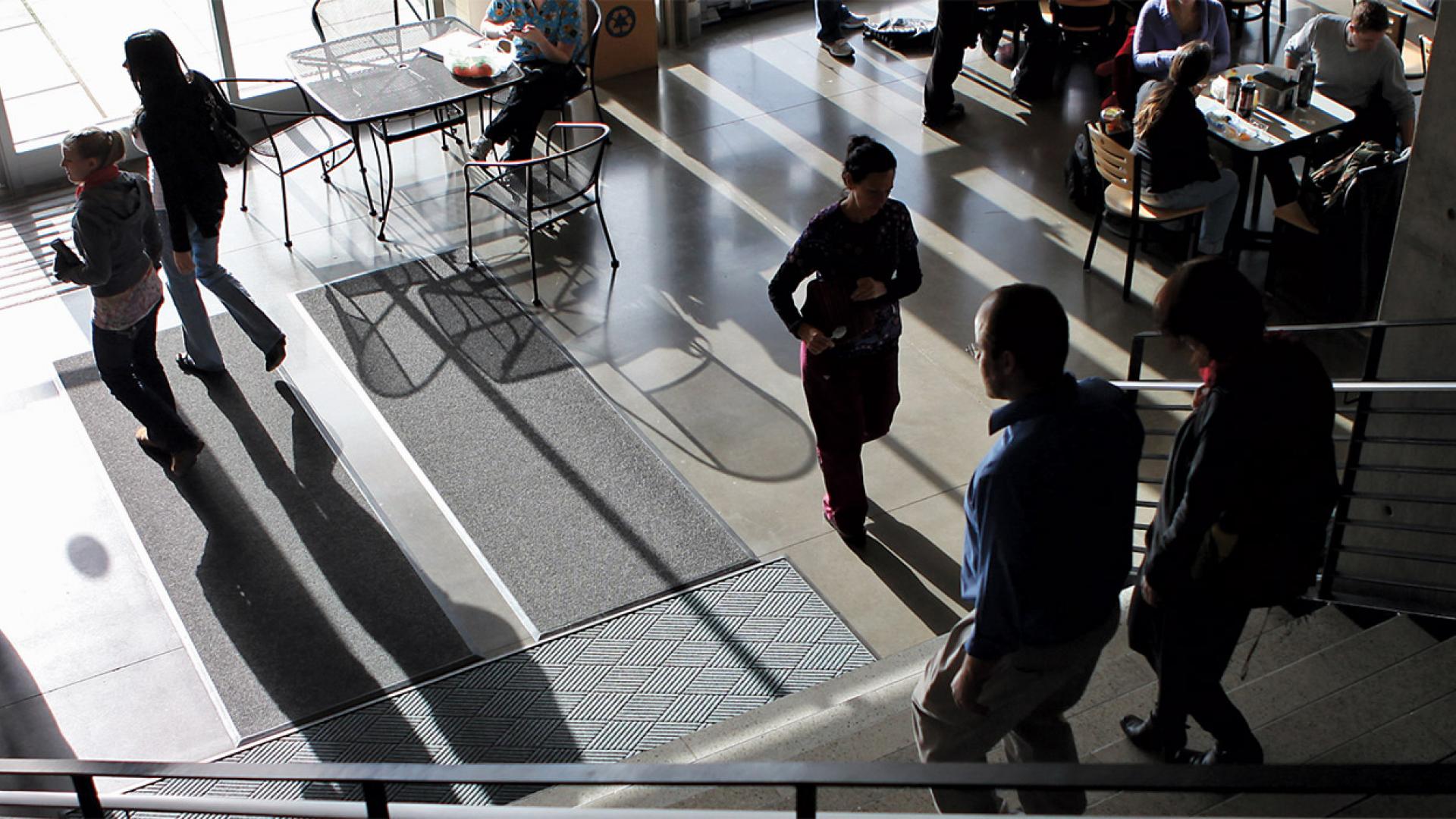 From the top of the three-story Intermodal Transit Facility (ITF) near the Health Professions Campus (HPC) in Hillsboro you can’t quite see forever, but the view is sweeping and panoramic.

To the west, stretching in a straight line, is downtown Hillsboro. To the south, literally a stone’s throw across Baseline Street, is Tuality Healthcare, the county hospital and medical center. To the north and east, arrayed along Washington Street and the MAX light rail line, are Pacific University’s Health Professions buildings—two extensive structures of brick, steel and glass rising three stories each.

In August 2010, the second building, HPC2, and the ITF joined Creighton Hall in the newly dedicated Health & Education District. The University’s School of Professional Psychology (SPP) is now housed in the new building, after moving from downtown Portland. A new public mental health clinic administered by SPP also joined the mix in HPC2, as did new spaces for the schools of Occupational Therapy and Pharmacy.

If you stroll past the massive solar panels on the top floor of the transit facility and peek over the edge to the ground below, you also can see a bit of the past along with a glimpse of the future. Right now, there’s a parking lot between the transit building and the light rail line, edged with bushes and overseen by five tall fir and cedar trees, remnants of the woodlands and plains that once blanketed the area. Here, a third building is planned, which will bring the College of Optometry to Hillsboro, creating synergy with the College of Health Professions.

When complete, building three is projected to be at least 75,000 square feet and cost a minimum of $35 million. HPC3 will unify all of Pacific’s health professions programs within two city blocks in a modern green building complex. Quite a journey from 1945 when the North Pacific College of Optometry became Pacific’s first healthcare program and was housed in the basement of Marsh Hall. Today, the College of Optometry is one of Pacific’s most visible and successful programs. Its nationally prominent academics and research produce graduates who run eye clinics and conduct vision research across the United States and Canada.

"Our goal is to help our students become well-rounded health professionals who can treat the whole patient and the whole community."

However, according to alumna and dean Jenny Smythe, (O.D. ’93) the college’s 1960’s-era home in Jefferson Hall on the Forest Grove campus is outdated and overcrowded and has become a competitive liability as other optometry schools modernize and new schools pop up around the country. “We want to meet and exceed the competition,” said Smythe.

The same factors that drove the decision for Pacific to relocate its healthcare programs to Hillsboro—Tuality Healthcare, light rail access and a larger patient base—are factors in the desire to move optometry eight miles down the road from Forest Grove. Like the first two buildings at HPC, the new building will make extensive use of natural materials, incorporate trees and natural areas where possible, and maximize light and energy efficiency. Importantly, it will also include much more space for optometry students and faculty to congregate, relax and study. Extensive new laboratories for the growing Vision Performance Institute, which is conducting studies of 3D, children’s vision and computer vision issues, are also planned.

The physical location and design of new spaces is also a key to the interprofessional philosophy that characterizes the healthcare campus. From day one, new students attend class and work collaboratively across disciplines, mirroring the emerging model in healthcare practice. For instance, these days a patient may work with an occupational therapist in tandem with a medical doctor, a pharmacist and an optometrist.

The College of Optometry is a key participant with the rest of Pacific’s healthcare programs in the city-designated Health & Education District, which includes Tuality Healthcare, the Virginia Garcia Memorial Clinic, Portland Community College and the City of Hillsboro. Case in point: the Interprofessional Diabetes Clinic at HPC. The clinic, which sees low-income, mostly Latino clients, is a partnership with Virginia Garcia, Tuality Healthcare and the Essential Health Clinic, a free urgent care facility for low-income patients. The diabetes clinic involves students, faculty and staff from all of Pacific’s healthcare programs.

In addition to Diabetes Clinic participation, Smythe is working with optometry faculty on possible curriculum enhancements that further embrace the integrated approach. Also, she said, University planners are looking forward to optometry at HPC to help foster more of a campus feel and to add critical mass to Pacific’s healthcare effort.

"Students, faculty and staff from all of our healthcare programs participate at the Inter-professional Diabetes Clinic, which serves mostly Latino clients from low-income families."

Not that things are sleepy now. In some parts of the campus, there is a studious quiet. In others, small groups meet in a side room, while a larger class takes place across the hall. On another floor, some students peer at their laptops in common areas while others grab a quick bite to eat and talk about assignments. On the ground floor of Creighton Hall, there’s a steady flow of people to and from the Virginia Garcia Clinic, the EyeClinic and EyeTrends and the 8th Avenue Bistro coffee shop.

That activity is likely to increase. Ann Barr, vice provost and executive dean of the College of Health Professions, said a number of new programs and initiatives are on the way. By the fall of 2012, Pacific will have a doctoral program in audiology, pending regional and professional accreditation. The new program will tie closely with the College of Education and its new master’s degree program in speech-language pathology. Professional psychology is adding a new Ph.D. program that will focus on stress and anxiety disorders. In addition, the School of Occupational Therapy is in the midst of a top-to-bottom review that likely will result in retooled or new degree offerings.

Audiology will follow a modified block curriculum, currently used by most of Pacific’s graduate healthcare programs and some undergraduate science programs. The approach involves content areas taught in short blocks of time. Students must master one block before moving on to the next one. They work collaboratively through a block and get extra points for demonstrating group proficiency of the topic. “It’s a very powerful model for learning,” said Barr. It also helps graduates pass licensing tests, she said, with both Physician Assistant Studies and pharmacy classes recently recording 90 percent pass rates.

Like many others, Barr is looking forward to building three. In addition to optometry, the new building will allow for expansion of other Pacific programs, more collaborative study spaces and common areas to add to the growing community synergy, she said. “It will really complete our inter professional hub for healthcare education.” ■

This story first appeared in the Spring 2011 issue of Pacific magazine. For more stories, visit pacificu.edu/magazine. 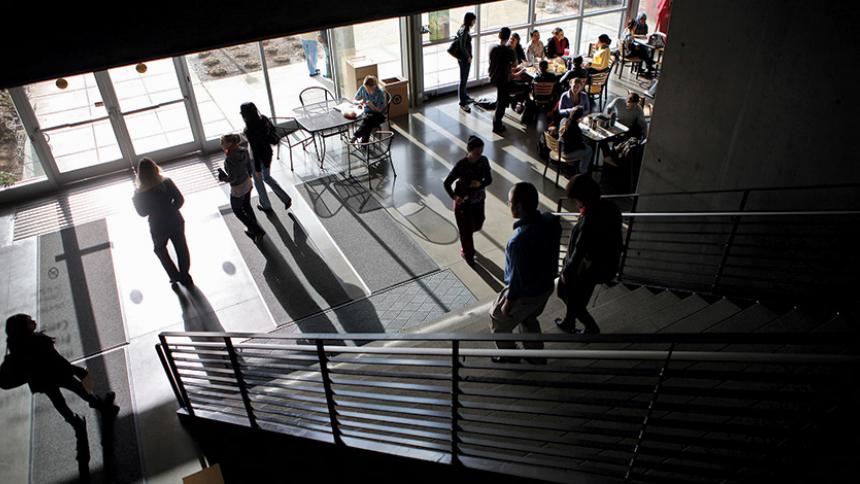