Heidi Nielsen '96: Using Both Sides of the Brain

There’s no telling where an art degree will take you. Just ask Heidi Nielsen ’96.

As a senior art student at Pacific, her prints and illustrations were hung in a downtown Portland gallery as part of a student showing. She sold some. That experience led quickly to an offer with Summit Projects, a Hood River, Ore.,-based design firm, even though she had not yet had any professional design experience. 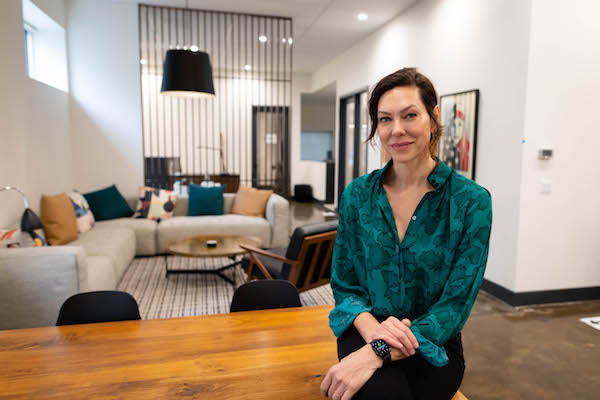 Twenty-two years later, Nielsen is a principal and chief operating officer at Portland’s Brink Communications, a respected, fast-growing communications and design firm that sets itself apart by focusing on clients “that are interested in building movements and creating change in the world.”

It’s not a path she, nor anyone, would have predicted, but it illustrates the importance of being flexible and taking advantage of opportunities when they emerge. Nielsen’s path also says something about the importance of thinking with both sides of the brain — the creative side and the analytical side.

“Every experience builds the next step,” she said. “Everything you do, everything that you experience sets you up for whatever is to come. I think I landed where I landed for a reason.”

When she graduated from high school in Hood River, she had top-notch grades and a special interest in theater and drama. She chose to go to Pacific because, while she wasn’t sure what she wanted to do with her life, she thought she might go pre-med, or into the physical therapy program.

At Pacific, she acted in performances and built theater sets. But about a year-and-a-half into college, she pivoted. She had been taking a lot of biology and related courses. She decided to focus instead on art and art history.

“I thought, ‘I can do this,’” Nielsen remembered about her pre-med days, but “I hadn’t really thought about what would really bring me joy.”

Her academic trajectory had changed, but something else hadn’t: She still was being pushed to think, not just absorb facts.“I think that Pacific was really key in developing critical thinking,” she said.

A Race Through the Design and Consulting World

Nielsen’s place in the world of designing looks and messages for clients evolved quickly — more quickly than she might have liked. After about a year at her first job, the designer who had been her mentor left the company, and she was thrust into the top design job.

“Everything you do, everything that you experience sets you up for whatever is to come.”
—Heidi Nielsen '96

“I was given the helm at a very young age to do all the graphic design that came through that agency,” she said. “To be honest with you, I cried for like a year. It was one of those sink or swim moments.”

But she didn’t sink. After a few years, she cofounded a boutique design firm of her own, and then her own design studio. Then Leslie Carlson and Marian Hammond, principals in a fledgling agency called Brink Communications, came calling. Would Nielsen be interested in joining them as the third principal?

At the time, Brink was as much an idea as a working agency. It sought to do work with a purpose, collaborating with clients who wanted to improve the world, bit by bit. But there was no guarantee it would succeed. Nielsen was one of five employees, and billings were in the range of $1 million a year.

Flash forward six-plus years to the present day, and Brink has grown to roughly 30 people. The company was listed last year as the 8th fastest-growing company by the Business Journal of Portland. Its clients include an array of organizations with social missions, from state health agencies to nonprofits and foundations.

For example, Brink worked with the Oregon Health Authority to create a COVID-19 awareness and response campaign directed especially to communities of color that were being disproportionately affected by the virus. Brink’s Safe + Strong campaign launched in April 2020, soon after the lockdown. It included a website in 12 languages and a continuing community engagement effort that included communications, branding, advertising, social media outreach, research, video and collateral materials. The agency has done similar work for many other clients.

“Our work is really justice-based,” Nielsen said. “All the work we do uses a justice lens: social justice, racial justice, health justice, environmental, gender, climate, and it really centers communities. We support movements and empower change.”

If you search Nielsen’s name on the web, you’ll note her placements in such cyclocross events as the Grand Prix Luciano Bailey, and Cyclocross Crusade: Cascade Locks. She has become an avid competitor in the sport, which resembles track and field’s steeplechase, except with bicycles, which compete to cover the greatest distance in 45 minutes.

Her participation in cyclocross grew out of her passion for mountain biking, which she adopted with her husband, David Combe, who had long been an avid outdoorsperson. Then the couple moved from Hood River to Portland, where mountain biking trails are relatively scarce. So they switched to road-biking. Then Brink principal Carlson persuaded Nielsen to try cyclocross.

Nielsen, Combe and their two daughters, 13 and 15, now lead active lives of backpacking and outdoor activities.

Like their mom before them, the two daughters are budding artists. The oldest is now a sophomore in high school, and she’s beginning to think about what comes after her senior year.

“She’s talked a lot about going to an arts school,” Nielsen said. “And I feel pretty strongly about a liberal arts education. I think the opportunity it provides you to become a critical thinker, and the opportunity it provides you to gain a wide variety of experiences, is really important. I think that narrowing down when you’re 18 or 19 or 20 years old isn’t as helpful. You don’t know what you don’t know.”

Another thing Nielsen will tell her daughters is to never stop learning.

“If we are open to influence,” she said, “if we can be open and see what opportunities are out there, we’re more flexible in how we move forward.” ■

This story appears in the Spring 2021 of Pacific magazine. For more stories, visit pacificu.edu/magazine.