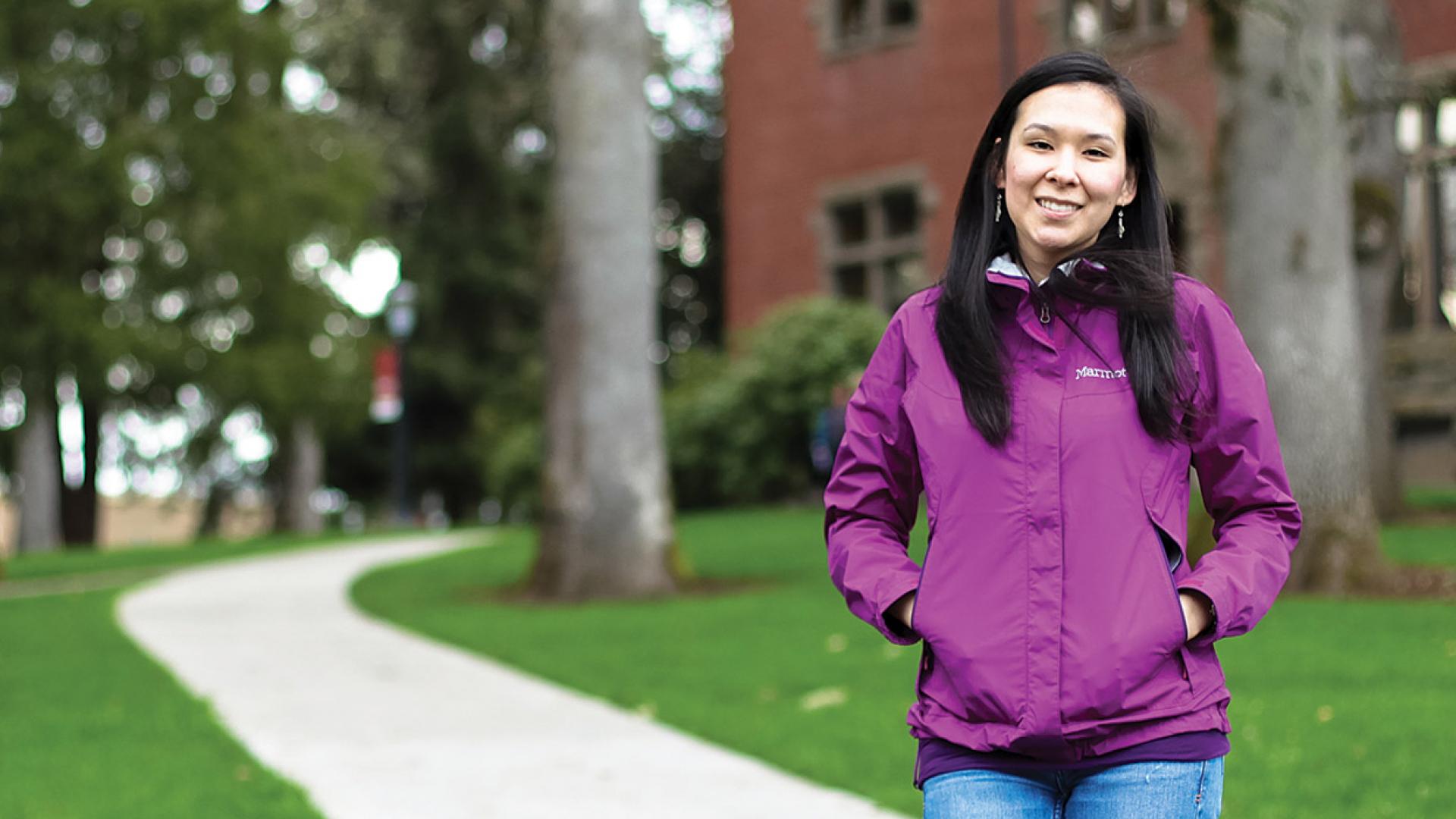 Rebecca Wilbur has had her eye on Pacific University’s College of Optometry for almost half her life. She first got the notion of becoming an optometrist as a 14-year-old in an Alaska boarding school. As Pacific offered the program closest to Alaska, it became her goal.

Celine Yip just knew she wanted to go to college, as impossible as the feat sometimes seemed. “(My mom) knew money was important to education, and she knew she wouldn’t be able to afford it.”

For many of Pacific’s students, the route to college — be it undergraduate or graduate — is far from easy. They scrimp and save, they do without, they rely on scholarships and loans not only for tuition but for living expenses, too.

Wilbur and Yip are among the countless Pacific students who come for more than an education— they come for hope for a different future, for themselves, their families and their communities.

Quinhaguk is a village of about 700 people in Southwest Alaska, on the edge of the Bering Sea. There’s commercial fishing and a public school to provide work, but most people live a subsistence lifestyle. They hunt and fish, speak the native Yu’pik Eskimo language, and meld the traditions of thousands of years with limited modern convenience.

The nearest regional hub is Bethel, ninth-largest community in the state at 6,000 people. To get there, Quinhaguk residents book a flight on a small six-seat plane (one that also makes deliveries of pricey store-bought goods), or they take a snowmachine across the tundra in winter or a boat upriver in summer.

Life in Quinhaguk is physical, and it’s familial.

“I grew up very different compared to most everybody I know,” said Rebecca Wilbur, a first-year student in Pacific University’s College of Optometry.

“As a family, we had to work for food — physically work. Running water is just being introduced. By age 10, I could haul a five-gallon bucket of water. I didn’t think of it as different or difficult.”

Everyone helped, because everyone was connected. Wilbur estimates she’s related to about half of the village, and she grew up with 35 first cousins who were as close as siblings.

“People are so friendly, so nice,” she said. “Even if they don’t have much, they’re the most giving people. I grew up with people who were very humble and … in general, just good people.”

It’s a life she appreciates and misses.

“My favorite thing to do is be out in the wilderness, walking on the tundra, being upriver fishing and camping. My best memories are playing at the beach, looking at the commercial boats on the ocean, sitting in a tent waiting for the rain to clear. Seeing wildlife and smelling the fresh tundra.”

It’s been a long time, though, since Wilbur has done those things. As much as she loves her home, she also knew that her opportunities there would be limited. That’s why, at 14, she left home to attend a selective, government-run boarding school in Sitka, nearly 1,000 miles away.

“My parents agreed I needed a challenge,” she said. “It was such a great experience as a young person to be around people who were so ambitious.

“It creates a momentum in you to continue to do better and better. I realized I could do something really great with my life.”

It was in high school that she developed the dream of becoming an optometrist and studying at Pacific, as well as the idea of bringing those optometry skills back to her community.

She admits her plans wavered through her undergraduate years at the University of Alaska Fairbanks, where she changed her major a few times and also struggled to finish her degree with a newborn in her senior year.

“That just proves how anybody can finish school with a full load. If you can go to school raising a family, you can do anything you set your mind to,” she said. “I managed to graduate. It’s probably one of the harder things I’ve done.”

After graduation, she spent time working in Alaska, but she was never satisfied.

“It wasn’t my dream, it wasn’t my goal in life to do what I was doing,” she said. “No matter how nice it would have been (to be done with school), something inside kept saying to keep chipping away. There was definitely a hunger inside of me to do something great, to do something better.”

When she earned an interview for admission to Pacific’s College of Optometry, she was ecstatic — and when she started classes this fall, she knew she was back on the track she had dreamed.

“Being around people with the same goal, the same dreams in life, it makes you want to wake up every day and go and learn the material and go to the lecture,” she said. “The best part of school is when one person succeeds, everybody is cheering them on. It’s so inspiring, even though it can be mentally draining and emotionally draining.

“Somehow, you get through it. It’s so satisfying, knowing this is going to help me contribute back to my community, my region.”

And that, always, is where Rebecca’s focus lies. She hopes, after completing her degree, to return to Alaska with her husband and son.

For people in villages throughout Alaska, healthcare comes at a high premium. Doctors rarely speak the Native languages or come from within the Native cultures, nor do they work in the villages themselves.

The nearest medical center to Quinhaguk, for example, is in Bethel, meaning a simple doctor visit can costs hundreds of dollars for a flight, not to mention food and lodging, for people in a limited-cash economy.

“They are sacrificing months of income to see you. I understand that, and growing up with that, it makes me feel obligated to give the best healthcare out there.

“I’m fluent in Yu’pik Eskimo, so that’s a healthcare disparity I can overcome. I understand the culture, the body language. It’s my culture, compared to someone coming in,” she said.

“I have skills that many doctors wouldn’t have in terms of language and coming from that culture, and understanding barriers and disparities is key to being a good provider.”

"It's so satisfying knowing this is going to help me contribute back to my community, my region."
– Rebecca Wilbur O.D. '16

Rebecca dreams of giving her son some of the same upbringing and family ties that blessed her childhood. But, she also knows that this time away has its purpose.

“I think I’ve sacrificed a lot in my life to be here. But I wouldn’t have it any other way,” she said. “I’ve lost these years (at home), but it’s so worth it to me, because I didn’t leave just to leave. I left to get an education, and it’s going to be worth it when I’m done.”

Celine Yip tried not to listen when people put down her high school.

“It has kind of a bad reputation, an ungrounded reputation,” Yip said of Jefferson High School, on the north side of Portland. “Pretty much that students are crazy and fight all the time, do drugs; there are security checks and low test scores.”

The rumors, she said, aren’t true, and they aren’t fair.

“People don’t fight all the time, and they won’t jump you.”

The reputation was uncomfortable enough that Yip’s family encouraged her to leave Jefferson — but she returned after only a year at a nearby public school, saying Jefferson was the right place for her.

It was a good decision: Yip became the first recipient of a new scholarship for a Jefferson student to attend Pacific University — a scholarship that made a previously unlikely college education possible.

Yip was born in Los Angeles but spent the first couple years of her life in China. Her mother, she said, immigrated to the United States from Cambodia, by way of Vietnam, as a teenager. Her parents decided to raise their family — Celine, an older brother and a younger sister — in China.

When the couple divorced, though, Yip’s mom brought the children back to the U.S.

Education was in the background, but it was always a tenuous possibility. Yip’s mother had a couple years of college but quit when she got married. Yip’s brother also went for a year or two, until he ran out of money.

“(My mom) wanted me to do well … but she worried, I think,” Yip said. “She had no way to pay for college for me. She let me know that early on.

“When I was younger, everything about education was governed by money,” she said.

For example, she said, “I loved to read, but my mom wouldn’t want me to read too much, because we’d get library fines if the books were late. Extra clubs and things cost money, so I knew not to ask.”

Yip didn’t give up — she just looked for opportunities.

At Jefferson, she said, many of her friends from freshman year had dropped out after she returned from her year away. Asked if she was tempted to do the same, Yip is surprised; the thought doesn’t appear to have crossed her mind.

“I think a lot of my friends were interested in college, but a lot gave up on the idea because they couldn’t pay for it. They just didn’t see it as an option,” she said. “I couldn’t imagine why someone wouldn’t go (to college). If I hadn’t gone, I wouldn’t be challenged, I wouldn’t constantly have something to do.”

"I think a lot of my friends were interested in college, but a lot gave up on the idea because they couldn't pay for it. Thye just didn't see it as an option."
– Celine Yip '16

So she got a part-time job, painting henna body art at parties and at Portland’s Saturday Market. She participated in activities at school, such as dance and drama. And she signed up for Jefferson’s “middle college” program, a partnership with Portland Community College.

The program, optional when Yip was in school but now a part of the school’s success plan for all students, allows high-schoolers to earn college credits at the nearby Portland Community College even before graduation.

“It was very nice, very, very nice,” Yip said. “It would save me money, a lot of money. I wondered, ‘Why isn’t anyone taking advantage of this?’”

Still, the future looked uncertain when she started applying to colleges.

“I applied to Pacific at the suggestion of someone else. I wasn’t planning to go,” she said. “I had a feeling I wouldn’t get enough financial aid, the package wasn’t enough for housing and tuition.”

As a freshman, she is relishing the chance to explore her options. She’s joined the dance team and helped a friend start a new art club on campus. She’s considering a major in social work and a minor in Chinese (somewhat ironically, as it was her first language — “I learned it first, but we forgot it as we grew up,” she said).

“So many people helped me,” she said of her journey to Pacific. “I know how lucky I was to have a free education.

“There are so many things available. I want to take advantage of everything.” ■