Annie Ho ’22 only knew three words of English when she moved to the United States: “yes,” “no” and “okay.”

Ho spent the first 10 years of her life in Vietnam and moved to Portland, Ore., after third grade, when her mother married her stepfather and he sponsored their move to America. By the time Ho was in fifth grade, she “pretty much spoke as a normal student.” 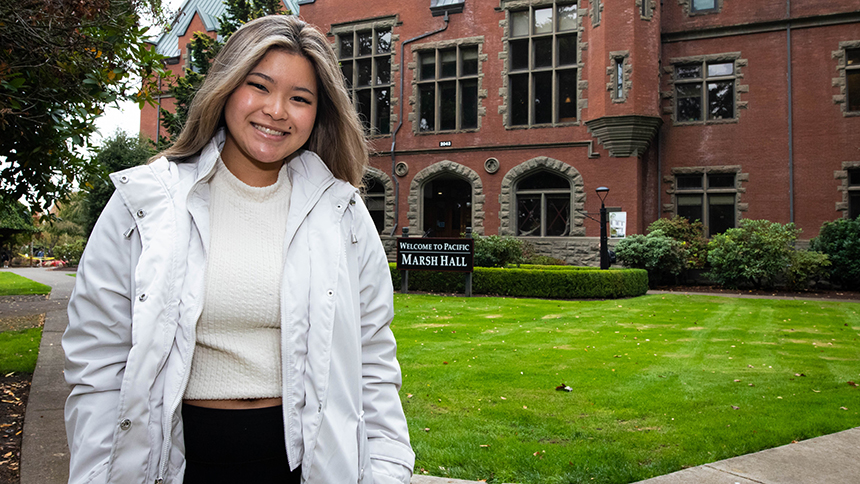 She remembers the moment that English clicked for her and she realized she could understand when people were speaking English to her — ironically, when she was explaining to an adult that she didn’t understand English. She laughed as she remembered it, saying, “It’s an amazing moment, you know, you remember it.”

Ho is the first recipient of the Newcomer Endowed Scholarship, a new equity and diversity scholarship at Pacific University that provides financial support to help immigrants and refugees in the U.S. achieve the advantage of a college degree.

The scholarship was established by Mike Francis, associate director of communications in Pacific’s Office of Marketing & Communications. Originally created with an outside foundation, Francis transferred and fully endowed the scholarship to Pacific after joining the university in 2018. Prior to his time at Pacific, Francis worked as a journalist at various outlets, including more than 20 years at The Oregonian, where his work included three stints as an embedded reporter in Iraq.

It was through his reporting oversees that Francis came to realize how difficult it is for people born elsewhere to afford and achieve an education in the United States, and how valuable the contributions to American society are by people who come from other cultures and countries.

“People who come from other countries enrich America and make it stronger,” Francis said. “We should do what we can to encourage them to come.”

Ho decided to attend Pacific because she wanted to go to a small school with intimate classroom environments. She wanted the chance to really connect with her teachers and fellow students and felt that Pacific offered a “warm environment.”

“Hopefully, one day, when I'm successful in my career, I get to become someone like him. I want to help students who are working hard to succeed in their future.."
— Annie Ho ’22

The first in her family to go to college, Ho is a biology major with a special interest in cancer biology and genetics. After graduating, she hopes to study radiation therapy and plans to apply to medical school.

In high school, because she was thinking about going into medicine, Ho volunteered at a hospital, ferrying patients around in a wheelchair. She loved connecting with them and felt honored when they opened up to her and shared personal information.

“Having them share that with me, I loved it, and that’s why I think volunteering is so important, because you don’t get to go through that every day,” she said.

In her time at Pacific, Ho has looked for other volunteer opportunities with various clubs and organizations, including assembling and distributing small hygiene kits to people in need in Portland.

“Anything I can do in the community, anything I can do to help my community grow, I would love to do,” she said. She has also found a welcome home with the Vietnamese Club, where she has connected with people who can relate to the same culture in which she grew up, and whose members are like brothers and sisters.

She acknowledges, though, that she feels she has “had to work twice as hard” to get to the same place as people who are born in the United States.

But she also realizes that this, in part, is what made her an ideal choice to be the first recipient of the Newcomer Endowed Scholarship. “Putting in the hard work and learning a second language,” she said, “but also adapting to the cultural changes and doing well in an environment where I wasn’t raised.”

“I’m sure my story isn’t unique — it’s interesting that I had to come here from a different place, but there are other students going through that as well,” Ho said.

When Ho started at Pacific, she never expected to receive any support, or have anyone help her. “I thought I was going to have to be the one doing all the hard work, and be the one finding ways to go,” she said.

Ho recently had a chance to speak with Francis, the scholarship’s creator, and shared her story with him. She’s honored to be the first recipient of the Newcomer Endowed Scholarship and grateful for the financial support it has provided her. And she already plans on paying it forward.

“Hopefully, one day, when I’m successful in my career, I get to become someone like him,” Ho said. “I want to help students who are working hard to succeed in their future.”

Francis, for his part, is very pleased that Ho was chosen as the first recipient for his scholarship.

“She is everything I hoped for in a recipient of the Newcomer Scholarship,” Francis wrote in an email. “She’s bright and engaging, and she brings the kind of cross-cultural perspective that enriches the university. “It warmed my heart to know the scholarship gave her a little bit of a lift.”