Pacific Accepts a Gift By a Veteran, for Student Veterans 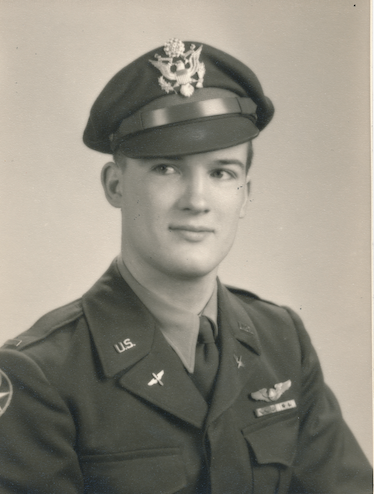 Students who are military veterans say they sometimes feel like outsiders on a college campus: They’re older than many of their classmates and many have had experiences that others can’t fathom.

Pacific University has risen to address this gap by opening the Veterans Resource Center on the Forest Grove Campus and offering a range of new scholarships for veterans.

The initiatives are funded by a generous grant to Pacific by Edwin G. Park Jr., a World War II veteran “who always believed in the value of education,” said one of his sons, Steve Park, an associate professor in the School of Occupational Therapy.

The elder Park, now 97, served during the war in the Pacific as a flight navigator in B-24 Liberators, back when the military’s aviation branch was known as the Army Air Corps. His handwritten “Crew History” records what the war was like.

When the war ended, Park came home, married Arlene Laura Millar, to whom he was engaged, and attended Washington State College, where he earned a bachelor’s degree in mechanical engineering.

He volunteered to return to active duty during the war in Korea, again serving as a flight navigator in the newly formed U.S. Air Force. When the armistice ended hostilities in 1953, he stayed in the Air Force, retiring as a lieutenant colonel in 1964. He then entered a civilian career as a mechanical engineer for NASA at the Ames Research Center in California, retiring in 1972.

Through his life, and the lives of his family members, he demonstrated repeatedly that he believed deeply in the importance of education. After earning his undergraduate degree between his military stints, he earned his master’s degree in air ordnance at Wright-Patterson Air Force Base near Dayton, Ohio. And he helped support his sons and grandchildren as they attended college.

“If you can imagine,” said Steve Park, “when I was 50 years old, I went back to college full-time to obtain a PhD.” That schooling, too, was partly paid by his father. “I work at Pacific University as an associate professor because I had the financial support of our father.”

When the Veterans Resource Center opened in Clark Hall on Veterans Day 2018, Steve and his brother Daniel attended the opening, along with Daniel Park’s wife Catherine Ann Park and their daughter, Theresa Lauren Park. Steve Park said Edwin Park’s gift to Pacific will help student-veterans make the most of the center, such as by bringing in speakers and sponsoring special events.

Since then, Pacific has been named among U.S News & World Report's Best Colleges for veterans nationwide.

“And to those Pacific University veteran students, here and in the future,” he said, “our family looks forward to hearing of your achievements, thankful that our father’s donation helped you achieve your educational dreams.” ■

More than 70 Pacific University students are currently using veterans benefits to pursue their degrees, but even more continue to benefit from student services and scholarships for veterans. Join Edwin Park in supporting Pacific veterans.