That is a central fact about which we can agree. Almost everything else in the tangled story about a mythical Chinese creature is a web of folklore, curious hiding places and campus bragging rights. Even the people best acquainted with the Boxer tradition get foggy about some of the details.

Go on. What is Boxer?

It’s a qilin, of course.

A qilin — a species of mythical animal with features that combine the head of a dragon, the hooves of a horse, the antlers (or antler) of a stag, and often, the scales of a carp. Chinese artists and sculptors emphasized different features depending on regional and dynastic preferences.

The name of Pacific’s qilin reflects its confused history. The original statue of the creature came to Pacific a little before China’s Boxer Rebellion, when Chinese traditionalists trained in the martial arts — called “Chinese boxing” by westerners — fought to expel foreigners, especially Christian missionaries.

Wait, Christian missionaries? Like the people who founded Pacific?

Exactly. The fact that Pacific University reveres an object named for a violent historical spasm against the Christian West is abundantly ironic. Which brings us to your next question:

He's been frozen into a block of ice, lowered by rope from a helicopter and held for a photo by Richard Nixon.

How did this oddball mashup of species come to be associated with Pacific University?

The short answer is that a Christian missionary named J.E. Walker bought a qilin statue in China for a reported $5, sent it to his mother in Oregon, and she donated it a few years later to Pacific. That donation took place in 1896, a few years before the actual Boxer Rebellion. Some people think the statue was 200 or 300 years old at the time, although nobody knows for sure.

At first the statue was a curio. But over the years, it developed a new kind of mythology — one associated with the students and faculty of Pacific. It became such a representation of school spirit that the school changed mascots in 1968, trading “Badgers” for “Boxers.”

According to early accounts, the qilin was first displayed in Brighton Chapel, where it oversaw the coming and going of a dozen classes of Pacific students. But in 1899, somebody — or several somebodies — removed him from his pedestal and launched him on the storied next chapter of its existence. For the following 70 years, Boxer would be abducted, reappear, be swarmed over by panting students, then disappear again.

It became a revered Pacific ritual — the “flashing” of Boxer, when he would be briefly displayed, revving up a crowd, and then “tossed” into a sort of mosh pit of students, who wrestled one another to exhaustion in an effort to possess him. Photos and films from some of those occasions show ripped shirts, flailing elbows and bloody noses. 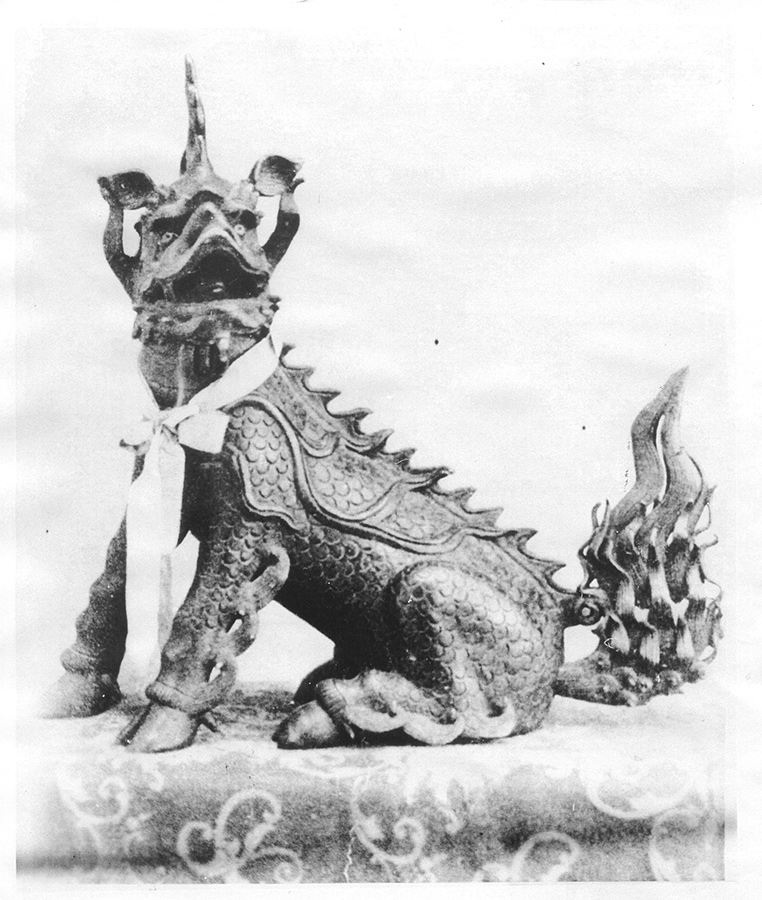 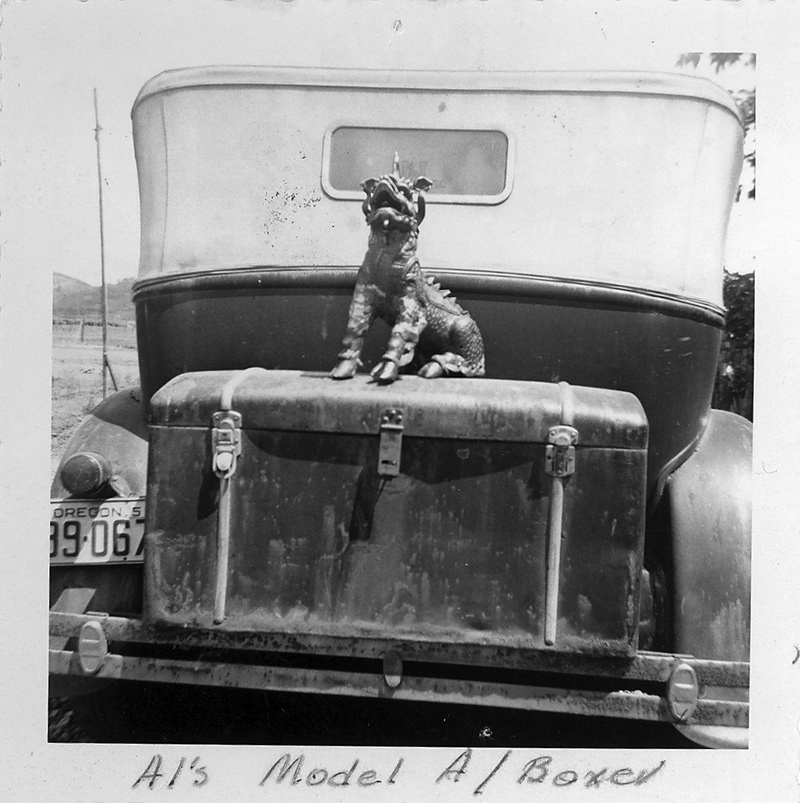 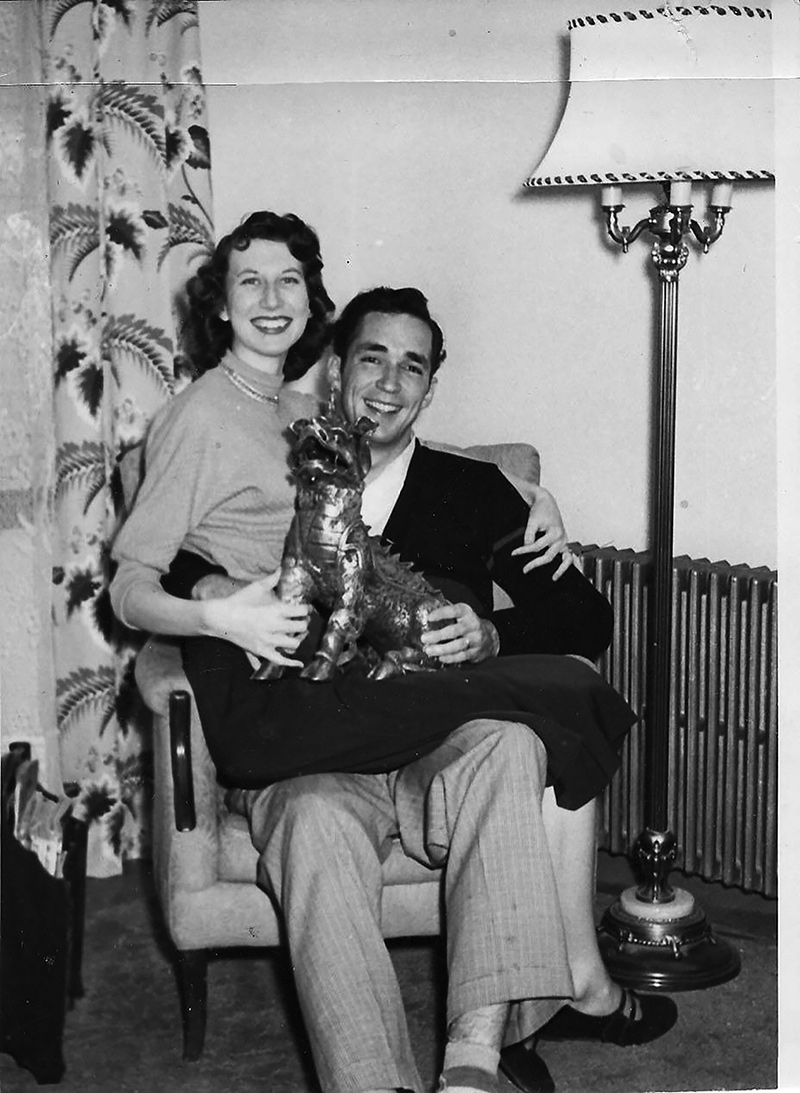 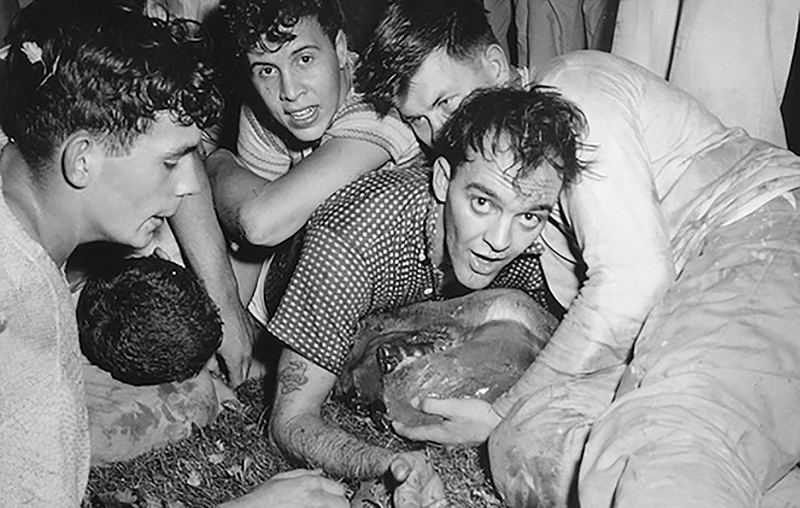 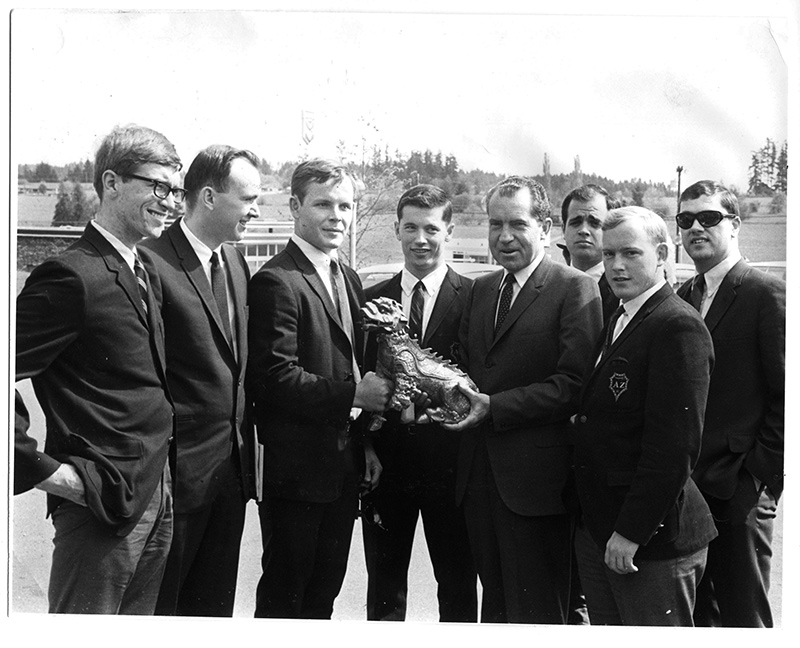 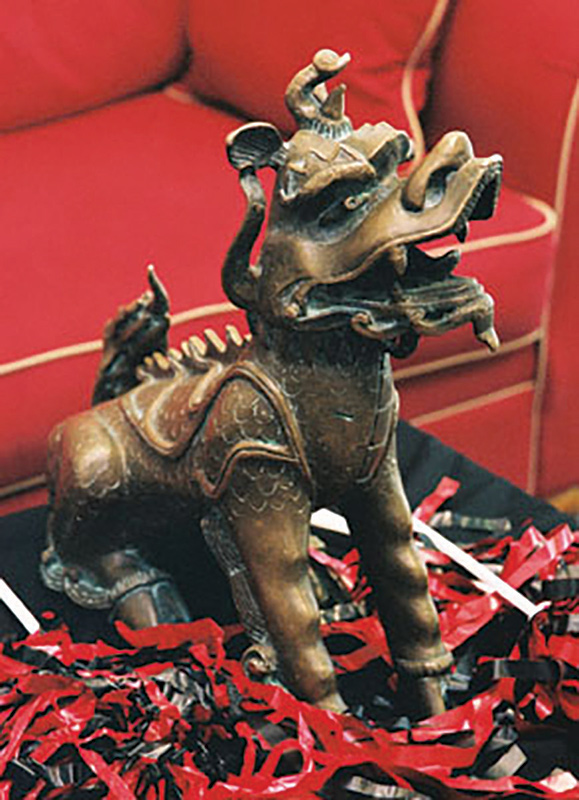 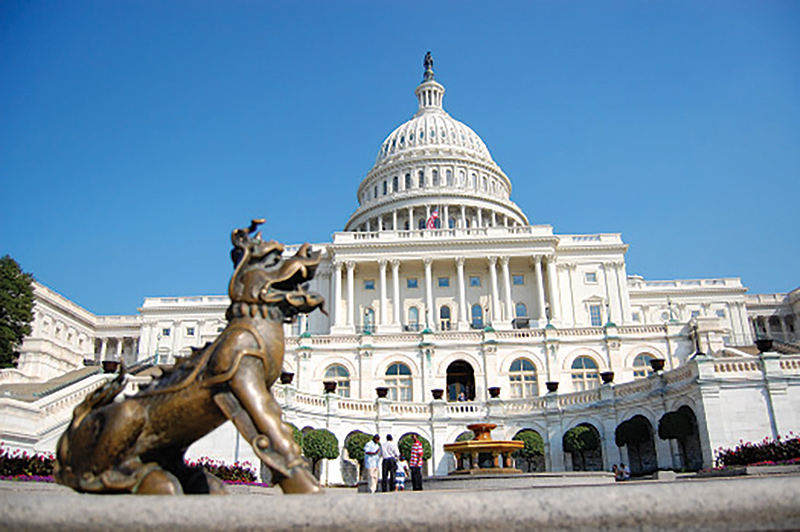 Boxer Over the Yearsview gallery

1927 | Students pose with a headless Boxer

1950s | Boxer tosses got infamously rough, like this one pictured.

Why did students fight over it?

Spirit. Camaraderie. Competitiveness. Machismo. Because it provided a crazy departure from the usual life of a student.

Alumni who recall the scrums around Boxer often say they were motivated to participate in such a vivid illustration of “spirit.” And it became a game of escalating stakes and risks.

People sometimes got hurt grappling for Boxer. A wrestler sustained a head gash that became a lifetime scar. Bones were broken. Clothing was ripped. Boxer himself sustained considerable damage over the years, losing pieces that were later welded back together.

And those who held Boxer became more and more inventive about hiding, flashing and tossing him. He’s been frozen into a block of ice, lowered by rope from a helicopter and held for a photo by Richard Nixon.

Bob Dernedde ’61 tells of the time his fraternity, Gamma Sigma, had procured Boxer. He said members of a rival fraternity jumped two of Dernedde’s frat brothers, shackled them in the back seat of a car and interrogated them vigorously about the whereabouts of Boxer. Eventually, he said, they were dumped on a country road beyond Buxton, stripped of everything they had been wearing, including shoes, “which was hilarious in my view.” After they wandered through the night, he said, they happened upon a farmhouse, where the farmer and his wife covered them up, fed them a meal and drove them back to campus.

The creation of the new qilin was a top-secret endeavor, with the artist laboring in a location known to very few.

Now we’ve unveiled Boxer III. What happened to Boxers I and II?

It’s a mystery. The original, battered Boxer disappeared after the toss of 1969. Many legends have grown around its disappearance, but very few people know what really happened. Fliers appeared on campus claiming the Black Student Union had captured Boxer, but members of the group say they don’t know where it went.

The bottom line is that Boxer I was never seen on campus again. Many lament his disappearance. Many others don’t.

Boxer II was a heavier version of Boxer I — 50 or more pounds, according to some who held him. He was returned to Pacific in 1982 after a student fundraising campaign raised $1,000 to cast a new qilin.

Jeff Grundon, who graduated in 1980 but joined the Admissions staff afterward, said he was walking on campus in 1982 when he followed the upward gazes of two men and saw Boxer II, chained within the branches of a campus tree. “Oh my God, it’s Boxer,” he said. He enlisted a student with a pair of boltcutters, the qilin was cut loose, captured and tossed again.

Dean Croshere ’07 may have spent more time with Boxer II than anyone taking the qilin on an epic trip across the country, in 2007, with documented stops at Wrigley Field, Mount Rushmore, the Hoover Dam and Niagara Falls. His extensive account and photos of the trip are still available online at Roadtrip Life..

Croshere was passionate about the statue and the tradition, and he lamented that the ardor of an earlier generation of students had largely dissipated by 2007. As he wrote that year in The Index, “Boxer fervor had died to such a degree that Boxer was walked through the UC shortly after noon to a reception of little other than disinterested glances and a couple of questions. Disinterested glances and an otherwise lack of interest are not passion: they are apathy.”

Alumnus Bruce Bishop ’68, who spearheaded the fundraising drive for Boxer III, said he heard that somebody jumped Croshere in the parking lot of a Forest Grove convenience store, and Boxer II was taken. The statue hasn’t been seen since.

“I was really sad to hear Boxer II had been stolen again and disappeared,” said Grundon, who now serves as senior associate director of admissions. “So I was really excited when I found out they were going to do Boxer III.”

How did Boxer III come to be?

Bishop’s fundraising campaign for Boxer III was intended to culminate at the 50th reunion of the Class of 1968 — the first class to graduate as Pacific University Boxers, rather than Badgers. The creation of the new qilin was a top-secret endeavor, with artist Pat Costello laboring in a location known to very few. The donor-funded statue was given to Pacific as a piece of art. Unveiled at Homecoming 2018, it is meant to be kept under lock and key. ■

This story first appeared in the Winter 2018 issue of Pacific magazine. For more stories, visit pacificu.edu/magazine.