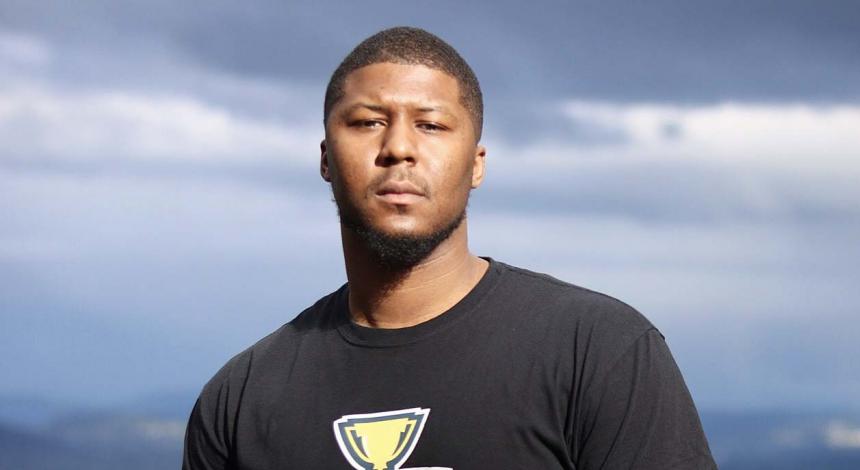 So when he got a chance to turn his passion into a career, the former college athlete jumped at the opportunity.

It’s a dream job, but one Pouncey didn’t expect so soon.

“I didn’t actually begin pursuing my radio career until I came to Pacific,” Pouncey said.

After studying and playing basketball for two years at Diablo Valley College in Pleasant Hill, Calif., Pouncey wanted to transfer to a school where he could both continue his education and his collegiate basketball career.

At Diablo Valley he’d studied kinesiology, but hadn’t enjoyed it much. Pacific faculty and advisors helped him find his way into media arts and the student-run radio station, Boxer Radio.

“That was when I really grew a passion for it and decided ... I think I want to do this radio thing,” Pouncey said.

While at Pacific, Pouncey was a strong asset to the Boxer basketball team and earned an All Northwest Conference Honorable Mention during his senior season.

He also discovered an interest in the intersection of sports and politics while taking a class from former Olympic athlete, Professor Jules Boykoff.

In Fall 2016, Boykoff asked Pouncey to host a sports colloquium on campus, which gave him the opportunity to meet and discuss the intersection of sports and politics with a number of athlete activists.

At the time, the collision of politics and sports was taking center stage nationwide, due in part to athlete activism by San Francisco 49ers quarterback Colin Kapernick. It proved the perfect opportunity to discuss current sports and politics with athlete activists.

“I was able spend time with these people and dig in deeper and really talk about their experiences, my own experiences, give them my perspective and get some of theirs, and it was just a great experience,” Pouncey said. “It definitely propelled me forward in wanting to pursue the career that I’m in.”

Pouncey had gained more radio experience during the summer of 2016 by interning on “The Bald Faced Truth with John Canzano,” a radio show that airs on 102.9 The Game.

He finished up his degree at Pacific in December 2016 and approached the station about any available positions.

He found a place as a temporary, part-time board operator helping broadcast Seattle Mariners, Portland Timbers and University of Oregon Ducks games.

However, Pouncey wanted to do more.

That March he launched “Wake Up and Win,” a podcast examining the intersectionality of sports, politics and culture.

In May, station management approached Pouncey, still a part-time board operator, about the possibility of becoming an on-air personality.

He did a two-hour trial show with co-host Justin Myers on Memorial Day.

The station management loved it.

After just a few short practice sessions, it was show time.

“It happened really fast and it was definitely unexpected. I just got thrown into the fire but that’s the nature of the business ... I’m enjoying every bit of it.”

In the world of radio, it’s rare for a 24-year old recent graduate to land an on-air position in a major market like Portland. Instead, many people spend years working in other positions before landing an often-coveted on-air spot.

“I’m doing what I really love to do and what I’ve set out to do ... I’m humbled by the opportunity this early on in my career,” Pouncey said.

Every morning he wakes up at 4:45 a.m. and arrives at the station around 6 a.m. to do a few hours of show prep before going on-air at 9 a.m.

To him, the pressure of knowing that people will hear everything he says live on-air certainly intense, but also thrilling and enjoyable.

As a former collegiate athlete, Pouncey brings a unique perspective to the show.

“The players and media don’t always see eye-to-eye when it comes to a lot of things,” Pouncey said. “That’s not to say that I’m defending players every time, but through the fact I was a player ... it definitely helps me now be a player’s media personality.”

The new on-air position has been a learning experience for Pouncey.

“Everyday I’m learning something new, whether it be statistics or sales ... I feel like I’m back in school again!” he said.

After the show ends at noon, Pouncey heads off to a part-time job at Albertina-Kerr, usually getting home at 9 or 10 p.m. He catches a few hours of sleep before waking up at 4:45 a.m. to prep for the show again.

Though his days are long, Pouncey says he loves co-hosting "Justin & DeVon" because he is living his dream.