After 35 years of service to Pacific, “Aunty” Edna Gehring is retiring. 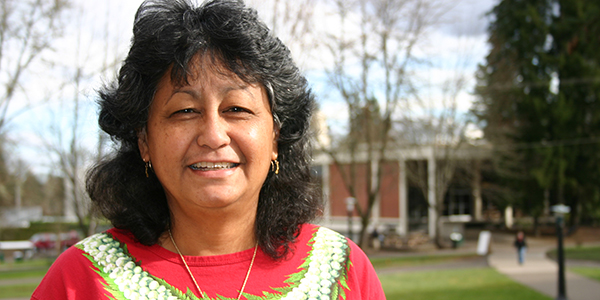 In her more than three decades at Pacific, Aunty Edna has become an institution, mentoring thousands of students. As advisor for Nā Haumāna O Hawai‘i (NHOH), Pacific’s Hawai‘i Club, Edna created a home away from home for Pacific’s students from Hawai‘i. “While many of us miss our families back home, she has created a family for us at Pacific,” explained alumnus Trey Kodama ’17. At the 58th Annual Lū‘au on Saturday, April 14, Aunty Edna will be celebrated and honored for her 35 years of service and mentorship to Pacific’s students, faculty and staff alike.

Though Aunty Edna will be retiring at the end of the academic year, she has ensured that the legacy of her commitment to the students will live on long after she leaves. With a generous gift, Edna has created the Aunty Edna Endowed Scholarship. This scholarship will be awarded to a junior or senior who is a member of NHOH and who actively promotes the NHOH mission and participates in NHOH activities and events. With the support of over 50 donors, many of whom are Pacific alumni or parents, the scholarship fund is already a third of the way to endowment level. Edna will also create a current use scholarship, to be awarded yearly until the endowed scholarship reaches full endowment. The first scholarship will be awarded later this spring.

Edna K. (Doar) Gehring is an alumna of Pacific twice over: she earned her BS in 1970 and her MSEd in 1972. Edna returned to Pacific to work in 1983, initially in the admissions office and as advisor for NHOH. She recruited students from Hawai‘i, Micronesia, Guam and American Samoa, as well as Native American students. As advisor for NHOH, Edna has been “Aunty” to all the students in the club, promoting the spirit of the islands and the ‘ohana dynamics among all students interested in the history and culture of Hawai‘i.

Edna has also served as the director of the Underserved in Sight Health Careers Opportunity Program for the College of Optometry, the director of Multicultural Services, Wellness Education and Learning Support Services (LSS) for Students with Disabilities, and since 2014, as director of the Hawai‘i Outreach and Programming Office. For all her services to the Pacific community, she received the University Service Award in 2000 and the David and Sandy Lowe Outstanding Alumni Service Award in 2005.

While she has worn many hats at Pacific, Edna’s main priority has always been the students. And her reputation for that commitment precedes her. "I had already heard of Aunty Edna’s unwavering commitment to students even before my arrival on campus," Trey said. "Her focus has always been us, the students. Aunty challenged us to grow and find our voice, in and out of the classroom.”

As the NHOH advisor, Edna has encouraged her students to chase their dreams and passions. “She is nurturing, yet determined to guide us to find our path in life, and she recognizes our potential to succeed, and supports all of our endeavors," Trey noted.

Nā Haumāna O Hawai‘i was founded in 1959 to bring together Pacific’s students from Hawai‘i. The mission of NHOH is to “promote and radiate the spirit of Aloha and preserve and perpetuate the unique cultural heritage of Hawai‘i.” Membership in NHOH is open to anyone interested in learning about the Hawai‘i culture. NHOH has become a prominent cultural organization on Pacific’s campus, and today boasts more than 300 members. Members take part in social events including a welcome back picnic, a holiday banquet and the lū‘au, act as peer mentors for new members and participate in service projects in and around the community.

Pacific University is committed to inspiring students to think, care, create and pursue justice. Gifts to the university support its $80 million fundraising campaign, Lead On: The Campaign for Tomorrow at Pacific University, which seeks to grow endowments, learning environments and innovations for a boundless future for students. To learn how to support student scholarships, including the Aunty Edna Endowed Scholarship, outreach or other programs, visit pacificu.edu/lead-on.