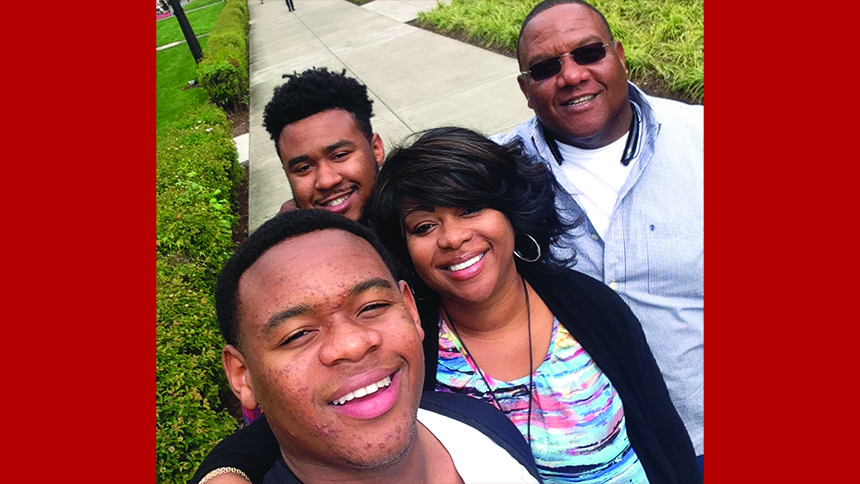 In the years since graduating from Pacific University, Avery Richardson ’17 has spent a lot of time gaining experience and honing his next plans.

An exercise science (now kinesiology) major, Richardson always had his sights set on a career in healthcare. Back in his undergrad days, he thought that would mean physical therapy school.

But after four years working in research and public health, he’s more interested in med school.

“I wanted to do something a little differently, work with more underserved populations,” he said.

Richardson, who grew up in California, attended Pacific University with a little nudge from his father, a 1986 alumnus. Avery played football, participated in Lu‘au and was a member of Pacific’s Black Student Union and Diversity Committee. And, he studied.

“It’s rigorous here,” he said back in 2015. “They want to push you, want to see you try, take initiative. I’m actually being prepared for the future here.”

As it turned out, his Pacific experience helped connect him with a research internship at OHSU, where he was part of a project studying health inequities and the impact of shifting Medicare funding into more preventive care.

“It really shifted the idea to treating people as a whole,” Richardson said. He cited the project’s common example of a woman living alone in an overheated apartment that led to health issue flare ups. “The state would pay thousands of dollars for her care, but wouldn’t pay for $70 air conditioning to prevent this. Let’s get to the bottom of what’s really needed.”

Following the internship, Richardson also became a certified nursing assistant and continued to work in a variety of roles with another OHSU project related to Alzheimer’s research.

When the COVID-19 pandemic hit, though, he realized it made the most sense to go home. He was able to continue working with the research project and also began a contact tracing job with Riverside County Public Health.

“It’s challenging but rewarding,” he said. “I wish we could be doing more. It feels good, being able to provide resources when needed, provide comfort when needed.

“Sometimes you’ll call for a five-minute questionnaire and end up talking for 30 minutes. I can’t provide much, but basic human connection, there’s a need for it.”

This month, Richardson also is starting some additional community college classes to gear up for med school and scholarship applications.

“Since graduation, I’ve veered from my degree and med school,” he said. “I got a lot of experience in healthcare. A lot of it is getting your foot in and figuring out what the next steps are. I’m really grateful things have really worked out.”

Photo: Avery Richardson '17 and family pose on the Forest Grove Campus in 2015.