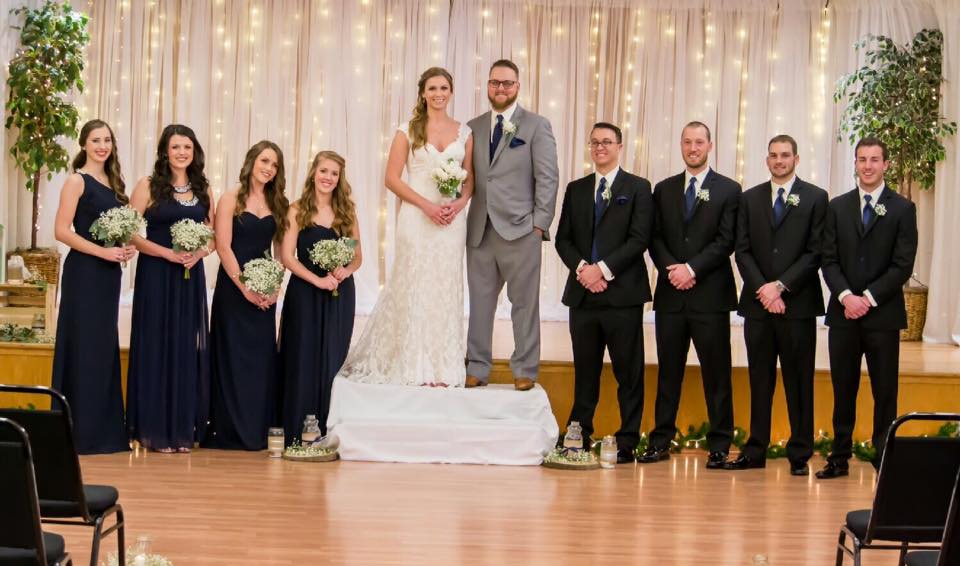 I know we all want the scoop on how Alissa and I met.

The amazing love story of two All-American kids who saw each other in a crowded courtyard and had love at first sight! This will put you all in tears, give you laughter, and most of all make you believe in love again.

Now that we have put all the clichés away, here is the story of Alissa and Nate.

As many of you know, Alissa and I went to Pacific together. I was the ruggedly good looking jock athlete macho man, and Alissa was the cutest girl on campus (and the best intramural basketball player in the school). One fall day in 2009, I was walking to class with my roommate (and groomsman) Kevin Schwartz. We saw a girl walking in the opposite direction out in front of Clark Hall. Catching both of our eyes, Kevin comments with a line that starts out in every romantic love story, "She's hot." Now, absolutely knowing that I was going to someday marry this girl, I responded with, "Dibs." We both laughed and continued on our way to class.

Flash forward almost two years later, and that was the next time that I remember seeing Alissa. By this time, I was roughly 215 pounds of solid muscle, so I really stood out at parties. I lived at 3020 with Kevin, and we threw some of the best parties in the school. Not those raunchy college parties that everyone sees in the movies, we threw sophisticated ones. The kind where you drink only fine wine, eat aged cheddar, and never ate a meal that you had to use your hands (right Rikki? (who is also Alissa's Maid of Honor)).

During one of these get-togethers, in walked that same beautiful girl from way back in the day. I never thought I would see her again because Pacific is SUCH a giant university and you never see the same person twice, but there she was, just as gorgeous as the first time I had seen her. There was only one problem ... she was holding the hand of one of my baseball teammates.

I know what you all are thinking. Haven't I seen this in a movie somewhere? This story has been told so many times, in so many ways. Its the classic, boy sees girl, boy loves girl, girl dates teammate scenario ... that is just not believable Nate! What I can tell you is, it happened, and I was mad ... I had called dibs!

College happens, graduation comes and goes, seasons change, and I move to Tacoma to chase my dream of becoming a big time college baseball coach the the University of Puget Sound. Crazy I know, such a young guy, right out of college, and to get a baseball coaching job in the prestigious Division III? What can I say, I was always destined to make the big bucks.

Then, what I never thought would happen next, did.

In the Winter of 2012, one of my old college teammates called me and said that he was going out in downtown Tacoma to celebrate Alissa's birthday, as she was home for winter break, and asked if I wanted to go. At this point I was fending off girls left and right, so with no ulterior motives, I of course said yes! We had a really good time, and that was the night that Alissa and I became ... friends. Not exactly what I was hoping for, but at least I had made it from 'guy who has the get-together house,' to actual friends! We ended up exchanging numbers and through time became really close. Alissa was always really easy to talk to, and the friendship we created when I lived in Tacoma and her in Forest Grove, is exactly why we are married today ... we just didn't know it back then.

Life works in mysterious ways. Ten months after being hired at Puget Sound, I received a call from my old college baseball coach at Pacific. A full-time job opportunity had opened up, and I was fortunate enough to be able to come back on staff at my alma mater.

At this point, Alissa was in her master's program at Pacific, student-teaching at an elementary school in Beaverton. Alissa and I had lost touch a bit during that summer before I returned, so we were not immediately spending time together. I was very lucky that Alissa got her student-teaching job where she did, because if she didn't, I can't imagine that we would be where we are today, together.

During her student-teaching, Alissa was teaching an expedition to her first and second graders. The expedition: baseball.

Out of the blue, Alissa asks me if she could bring three classes of 1st and 2nd graders on a field trip to Pacific for our upcoming games. Now again ... still with no ulterior motives ... I said of course!

I went all out for this field trip. What Alissa doesn't know is, I actually prepped for it, figuring I could impress her. That's the funny thing about love and how you meet your someone. It isn't a straight line. Alissa and I had multiple opportunities to fall in love much earlier, but it wasn't our right timing before. The only reason I can think of why it didn't happen before is because God wanted us together but needed us to go through some things first.

After that day, Alissa and I started having dinner once a week and became very close. In the summer of 2014 I asked her on our first actual date, and she said yes. That was the day our relationship began to grow substantially, and the best day of my life up until that point. Fast-forward two and a half more years. Now, we sit together in Greeley, Co., along with our puppy, Fenway (yes, like the ballpark. We love baseball!).

She is a 4th grade teacher now, and I am coaching baseball at the University of Northern Colorado. Moving from Oregon to Colorado was our first move as a family, and we couldn't be happier.

We actually came back to Pacific, the place where our love story began, and got married on January 7, 2017 (1.7.17). We decorated the MPR so beautifully, and we were lucky enough to have a dusting of snow that day. All our friends (many from Pacific) and family were there to share our special day. It was a perfect day, and it never would have happened if we did not meet at Pacific many years ago.

We are so grateful for this place.