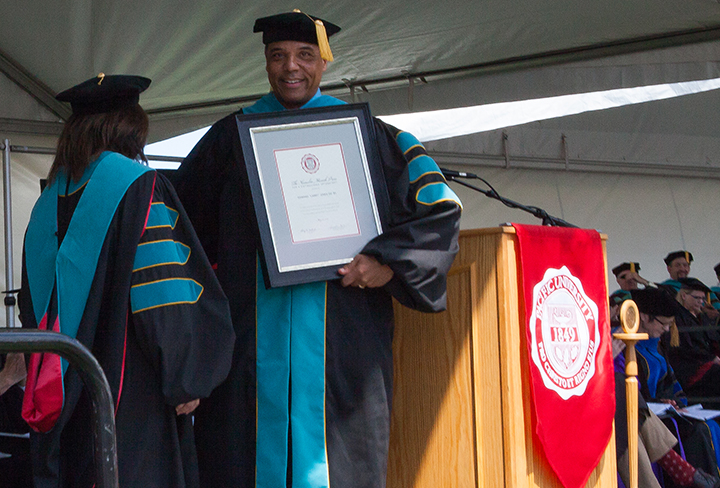 The honor is bestowed annually upon a Pacific optometry alumnus who has made a significant impact in the optometric profession by serving his or her community with distinction. The honor is named after 1985 alumna Dr. Kamelia Massih OD '85, who devoted her life’s work to caring for her patients, including many from underserved populations. Beloved by her family, friends and patients, Dr. Massih passed away in March 2010 following a three-year battle with cancer. Through a generous bequest from Dr. Massih’s estate, an endowment was established at Pacific in 2011 in support of the honor.

“Dr. Massih served her patients and members of the greater Portland community with a level of compassion and care that exemplifies Pacific University College of Optometry alumni,” Coyle said. “Her respect and admiration for the passion with which her fellow alumni serve is something she and her entire family wished to honor following her passing.”

After competing in football and earning his bachelor’s degree at the University of Washington in 1981, Jones excelled at Pacific in the optometry program and many other areas on campus. Dr. Jones became a close friend of Dr. Massih as part of the College of Optometry’s class of 1985 cohort. He worked as a crew chief in the university’s maintenance department, was a resident advisor with student housing, and served as an assistant coach for Boxer Football, as well as on the university’s graduate student council.

An active member of the National Optometric Association for more than 30 years, including 12 years on the association's executive board, Dr. Jones was honored last summer as the NOA’s 2016 Optometrist of the Year.

“Dr. Jones is an amazing ambassador for both Pacific University and the College of Optometry,” Coyle said.

His community extends beyond his thriving practice, Eyes Rite Optical & Hearing Center, in the Seattle suburbs of Kent and Renton.

He has worked with the Washington Legislature to promote better vision screening protocols and provide vision services to young offenders. Washington recently became one of the few states nationally to require vision screening for at-risk youths after research identified vision problems as a risk factor for future deviant behavior.

Jones’ other ongoing community service includes helping the College of Optometry administer its annual run/walk fundraiser and supporting events for the hearing impaired and for military veterans who can’t afford vision care in the Seattle area. He also donates his time and resources, including eyeglasses, to his local community’s homeless population.

He recently helped build the Pacific student chapter of the National Optometric Association (NOSA), which has been active in fundraising for the university's new EyeVan mobile clinic.

"You've all developed great character from this awesome university, no matter what your background — from Tehran or Tigard," Jones told graduating Class of 2017 during the commencement ceremony. "Your past failures or successes, I believe, can change the world and make it better. Thank you, Dr. Massih. In your altruistic actions, you've given us all a challenge. Let's make all lives matter."