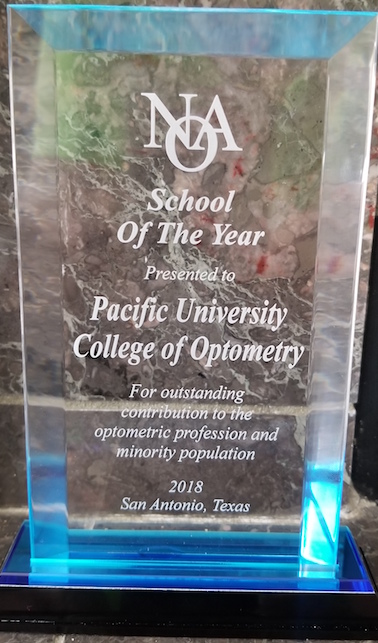 The Pacific University College of Optometry has been named the 2018 School of the Year by the National Optometric Association for its ongoing commitment to providing vision care to underserved populations. The NOA announced the honor at its annual convention, held July 13-15 in San Antonio.

Among its top objectives is to recruit students of color into schools and colleges of optometry. The NOA also assists all new graduates, as well as established optometrists, toward the enhancement of optometric knowledge, skills, professional practice, career placement and the procurement of financial aid. The association also strives to aid all established optometric organizations toward the advancement of the art, science and practice of professional optometry.

Pacific’s nomination for School of the Year was submitted by alumnus Larry Jones OD ’85, a longtime NOA member and currently the organization’s president elect and board liaison to all optometry schools and colleges located on the West Coast.

Dr. Jones, the 2017 recipient of Pacific’s Kamelia Massih Prize for a Distinguished Optometrist, nominated his alma mater because of both the college’s commitment to recruiting underrepresented students, and for its strong student-led commitment to providing vision care screenings and other services to underserved populations throughout the world.

He acknowledged College of Optometry dean, colleague and friend, Dr. Jennifer Coyle '90, OD '93, MS '00, as a trailblazer and advocate for diversity at Pacific. "Dean Coyle’s impact on optometry and helping underrepresented minority students is exemplary," Jones said after receiving official word of the college's School of the Year designation.

For many years, Pacific optometry students, faculty and staff have provided vision care screenings and other services to communities who lack access or financial resources through the college’s EyeVan mobile clinic and its AMIGOS Eye Care program.

Dr. Jones noted that the EyeVan came to fruition in part through a $2,500 gift from the college’s student chapter of the NOA (NOSA). His nomination also recognized Dr. Sarah Martin, director of the college's community outreach efforts that include the EyeVan, for her ongoing efforts in guiding students and other Pacific faculty to care for the Latino community and other underserved communities throughout the greater northwest region.

Dr. Jones' passion for serving others took hold while he attended Pacific's College of Optometry in the early to mid-1980s. He has attended nearly every NOA convention since he was offered the opportunity as an OD student in 1981 by mentor and former Pacific College of Optometry Dean Wid Bleything '51, OD '52, MS ’54. Jones said his initial support from Pacific's optometry leadership and subsequent experience with the NOA has had a lasting impact on him, and he believes strongly in the mission and objectives of both entities.

“Dr. Bleything sponsored my attendance to that conference in San Diego, which I couldn’t have afforded on my own at the time,” Jones said. “That first experience at an NOA conference gave me some hope I could possibly get through optometry school, because I saw other people of color, who just like me, had to overcome economic disadvantages and the lack of diversity in the profession. The conference provided the support I needed to make me feel right at home within the field of optometry.”

Jones said the NOA's underlying purpose to help minority populations aligns with Pacific's commitment to underserved communities. "The NOA's overarching goal is to address visual health needs of underserved populations, many of which consist primarily of ethnic minorities,” he said. “These populations, including African Americans, are more prone to chronic diseases like diabetes and related vision complications, including glaucoma and diabetic retinopathy. These conditions invariably hit people of color a lot more, so the NOA’s role in helping both patients and aspiring practitioners from minority populations can’t be overstated."