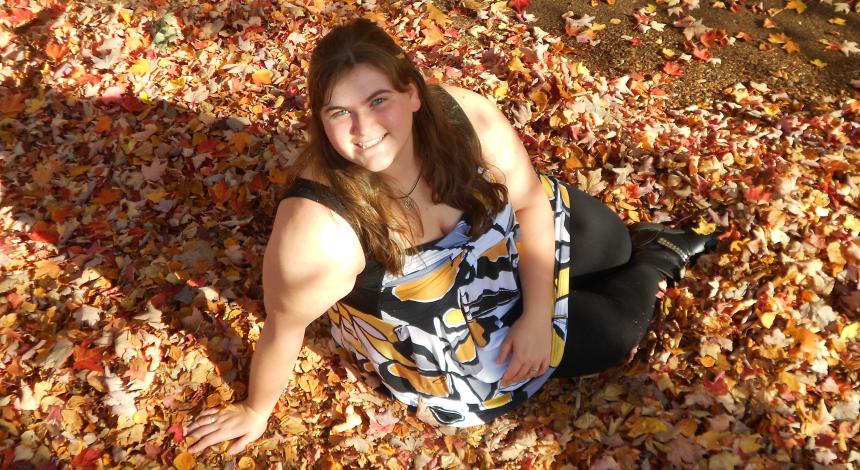 “It’s so exhilarating when you let go and the arrow whizzes out of your hand and flies through the air.”

Amber Patton ’14 started exploring archery for fairly academic purposes while studying abroad in Ireland last year. By the time she was done, she had become nationally ranked as a bare bow shooter.

And that was one of just many new experiences she gained while studying overseas.

A creative writing major who is also minoring in literature and music, Patton chose Pacific because she wanted a university close to home but far enough away to feel independent. The Music Department also drew her with a substantial scholarship.

“We have such a tight knit group of students and faculty,” she said. “I have been taught by some amazing professors, too. Those are the things I will miss most when I leave.”

Between classes, Patton is a student editor for the Silk Road Review literary magazine and works in the music department.

“Wow, I really don’t have a life, now that I think about it!” she said, giggling. “It’s kind of hard to have one when I’m so busy with the academic side.

She’s hoping to get an internship at a publication house and pursue a career in editing.

Last year, though, she sought out different experiences.

Patton knew she wanted to live in Europe since a high school trip with the Oregon Ambassadors of Music, during which she toured six countries and fell in love with the “old soul” of Europe.

When presented with the opportunity to study abroad at Pacific, she had a choice of three countries. She said she didn’t know much about Ireland at the time but was drawn to its rich arts, particular music and authors.

“I just wanted to immerse myself in a European country and learn all I could,” she said. “The culture, people, and how they saw the world all fascinated me.”

That immersion came with some culture shock, though.

“I was like, ‘Where’s WalMart?!’ I even called my mom within the first couple weeks and begged to come home,” she said.

After acclimating to the unfamiliar dialect and to life with two French roommates who barely spoke English, Patton said she fell in love with the new world around her.

“It’ was so worth the “ahhhhs’ in the beginning,” she said. “My roommates are my best friends now. At first, we had to kind of play charades to talk to each other. Now we talk nearly every day.”

And the memories are countless.

A favorite? “Oh gosh,” Patton said with a huge, reminiscent grin, “can I pick more than one?”

She names her first road trip with her roommates, seeing the Dingle Peninsula, visiting Rome, and attending her classes, which were considerably different than in the United States.

Students in Ireland were never required to go to classes and weren’t assigned homework, she said. The ones who were in class truly wanted to be there.

“It felt so much more interactive, and I really enjoyed the discussions,” she said. “Even though we were required to do less, I felt like I was learning more.”

Archery was another chance to learn something new. Though she had no previous experience, Patton decided to take up the sport about three weeks into her trip.

“I wanted to join the archery club and fencing club because I write historical fiction and I wanted to be able to accurately describe the actions,” she said, quickly laughing at herself again. “Oh gosh, I must sound like such a nerd!”

The first day she shot a bow, she knew there was something special. An instructor said she was doing it wrong, but she replied that her way felt more natural. From that moment, she was moved from the beginners’ group to the bare bow group, where she was the only woman.

The first time she shot, she missed the target face completely, she said, laughing. But soon, she started to improve exponentially.

By the end of the season, she had racked up 12 awards, attended seven tournaments and two nationals and was ranked third in the Master Apprentice List.

“I’d say I left some of the newbies in the dust,” she said, with a humble, if coy, grin.

She hasn’t shot her bow since returning from Ireland, but she continues to exercise to stay in shooting shape. And her success has led to more attention than she expected, from congratulations from friends and peers to a story in The Pacific Index.

“I miss how relaxing it was,” she said. “You can’t really concentrate on anything else if you want to shoot well. There are too many things to focus on with your body to let outside forces enter your mind.”

Patton said she would like to start an archery club on campus and continue with the sport as a hobby, but not more.

More important to her is returning to Europe. Patton is applying to graduate school in Ireland to study Matters in Comparative Literature and Culture Studies. Going back to Ireland, she said, feels like going home.