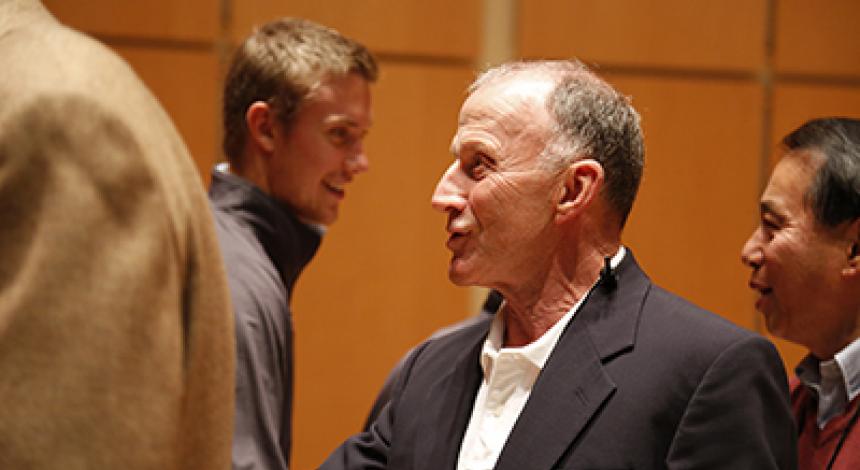 George Long ’63 came to Pacific University in 1959 thinking he wanted to be an optometrist.

“I had pretty poor vision at that time and working in a scientific field to treat others with the same malady seemed like an interesting career.”

World events intervened, though. The Soviet Union’s launch of Sputnik, the world’s first artificial satellite, in 1957, followed by a second a year later, led the United States to create the National Aeronautics and Space Administration, NASA.

“There was a lot of interest then with majors in science and mathematics,” Long said. “I had always done very well with physics and math, and Dr. Andrewa Noble, chair of the Mathematics Department at Pacific, suggested I might want to change my major.”

He did, and went on to a distinguished career as a research scientist, project manager and program director for the U.S. Naval Surface Warfare Center in Dahlgren, Va.

“I totally enjoyed my time at Pacific,” Long said. “The liberal arts curriculum was so important in obtaining a well-rounded education and, as I found out later in my professional career, many of the engineers and scientists from some of the large technical schools didn’t know how to writer or how to spell.

“That’s very important for writing technical reports, as well as giving technical presentations, and I was able to do that.”

He also a member of the Blue Key National Honor Society at Pacific, as well as president of Alpha Zeta Fraternity.

“Of course the best part was the lifelong friendships that developed with my AZ fraternity brothers,” he said.

After graduating from Pacific, he was awarded a teaching fellowship at Iowa State University, though his tenure there was short-lived.

“ISU was not a great match for me as I was interested in ‘applied mathematics,’ and ISU was more committed to ‘pure mathematics’.”

He stayed a year, then received an offer from what was then the U.S. Naval Weapons Laboratory in Dahlgren, Va.

The salary was good, and the center agreed to send him to graduate school. Long earned a master’s degree in applied mathematics in 1969 from the university of Missouri.

He did research in the analysis and testing of fire-retardant paints to prevent premature detonation of ordnance on Navy ships. Later, he served as project manager for the development, installation and testing of the gun-mount for the Army’s 105mm Howitzer, to be used aboard the Air Force’s AC-130 Gunship.

He also worked with the Aegis Anti-Ballistic Missile Defense Program, started in the 1980s. He led the concept development team that demonstrated the feasibility of the idea, then became the first program director of the program, which continues today.

Long retired in 2002 after 38 years, then continued consulting for a small engineering and integration company. He’s still trying to “taper off,” he said, but “I really like the work.”

Today, Long competes in father-son tournaments with his son, Kevin. Most recently, the finished third at the National Father-Son Indoor Tournament in Cherry Hill, N.J., in 2012.

Long lives on 30 acres in the Virginia countryside with his wife, Martha. They have two children, Martha Marie and Kevin, as well as three grandchildren.