Noah Elliott ’08, MAT ’09 Adds Teacher of the Year to a Career Full of Honors 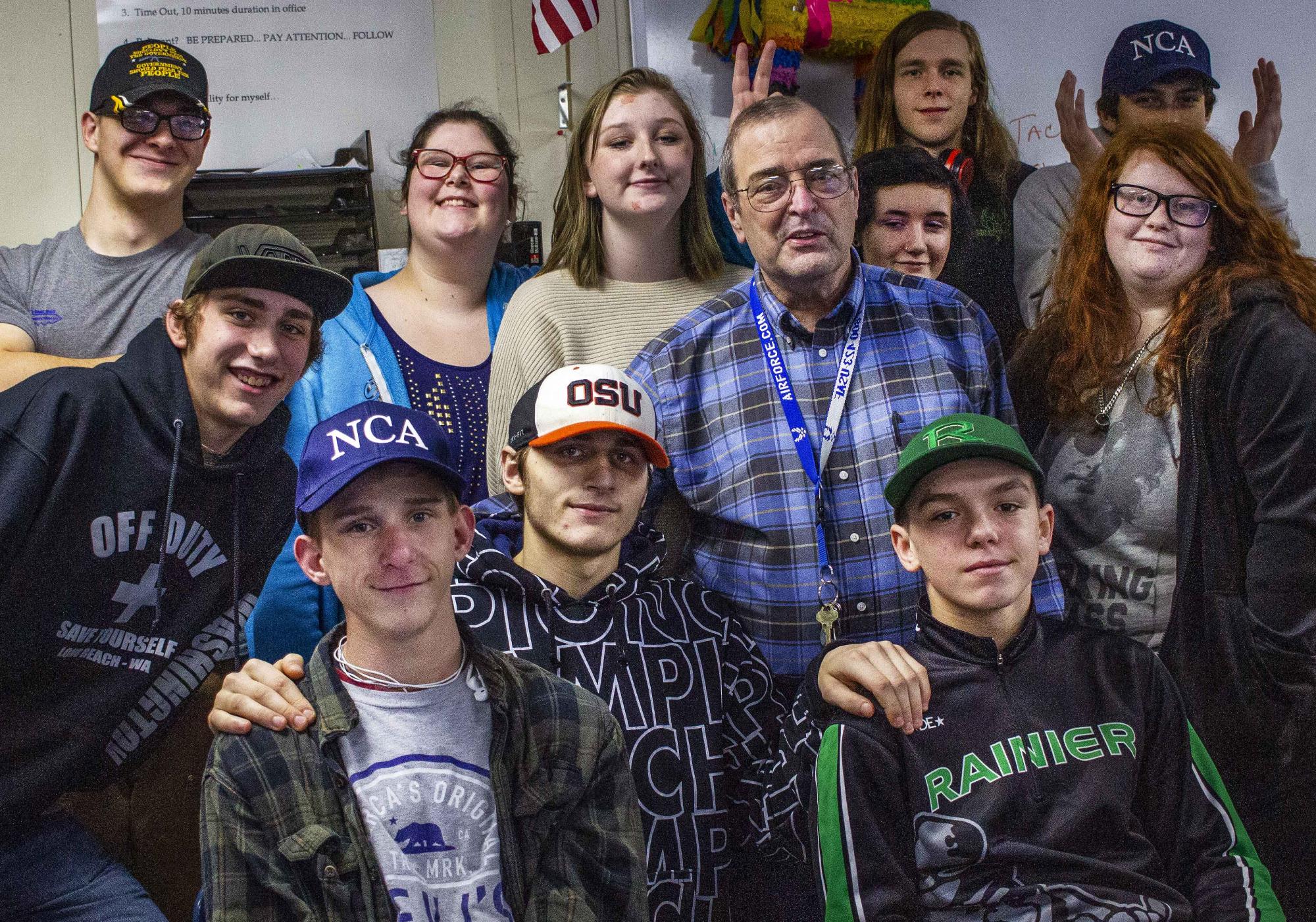 Noah Elliott ’08, MAT ’09 acknowledges that being a teacher, and being named the Oregon Small Schools Association 2020 Teacher of the Year, is very rewarding. Yet it’s not the only rewarding thing he’s done.

There was the time he shook hands George H.W. Bush during the then-president’s visit to Offutt Air Force Base in Nebraska, where Elliott, a B-52 gunner, had flown. Elliott was introduced to the president, himself a former pilot, and the White House photographer snapped the picture.

“I consider that a very exciting time in my life,” Elliott said in a Zoom interview. “It’s not something everybody gets to do.” 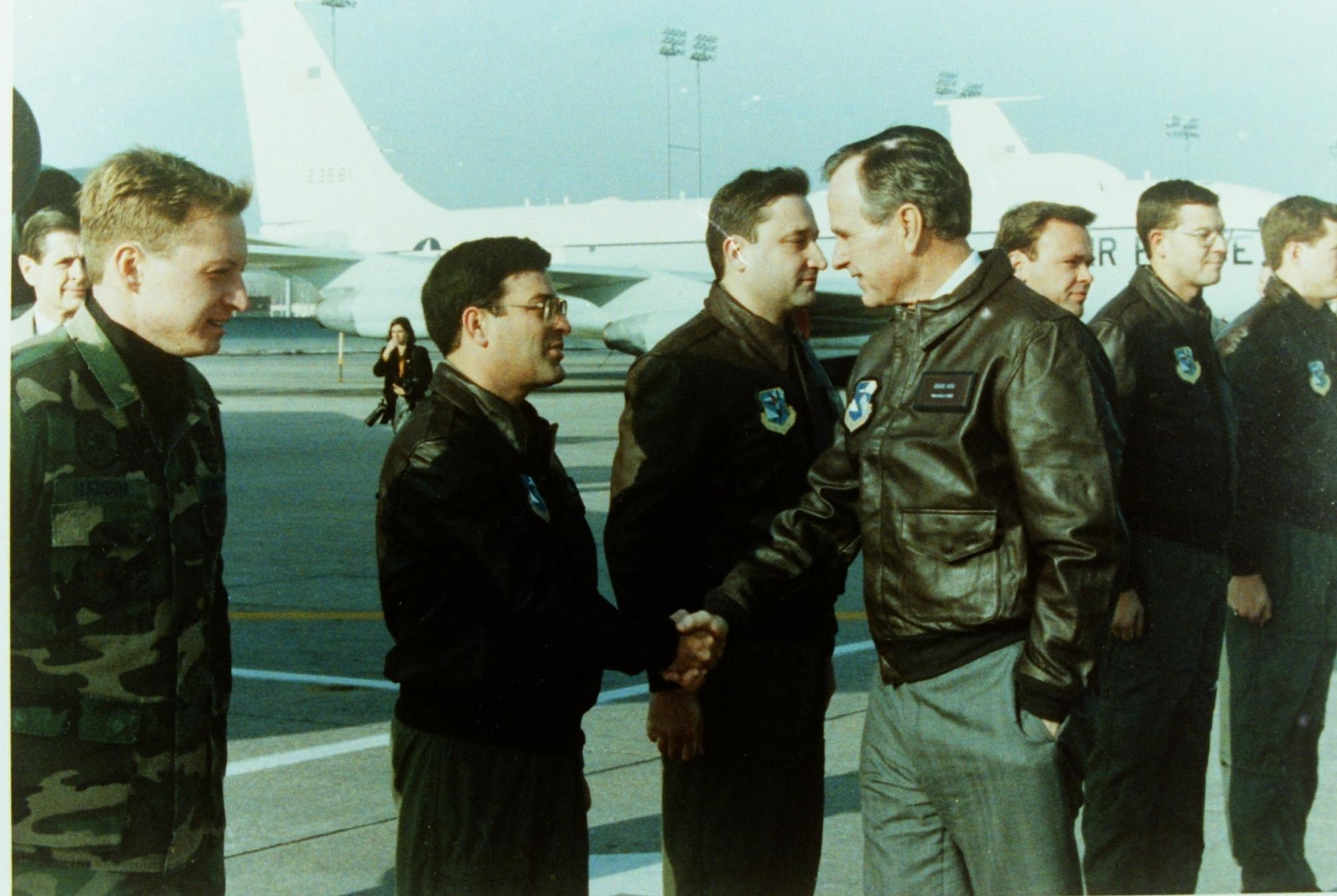 But teaching, he explained, ranks alongside that experience.

Between those highlights — meeting the president and being named teacher of the year — Elliott’s career journey threaded through Pacific University. After a 22-year Air Force career and a few post-retirement jobs, he applied his benefits from the Department of Veterans Affairs to enroll at the university, which was convenient to his home in Columbia County. He entered the university at age 54, then completed his bachelor’s degree in history, and his master’s in teaching.

“I had a wonderful time,” he said. “I made some friends I’ll have for life.” And his professors were great, he said.

Elliott now teaches at North Columbia Academy, an alternative high school in Rainier, Ore., where he makes a daily impact in the lives of kids who enroll after they encounter problems in mainstream schools.

One of his students, Broodey Chamblee, told The (Longview, Wash.) Daily News that Elliott is “everything you want in a teacher. He tries to connect in the best way possible … Every teacher should strive to be the way he is.”

The award came as a surprise to Elliott, who didn’t know he’d been nominated. When he was chosen from among all the teachers in 160 districts in Oregon, he was as surprised as anyone. But having the award on his classroom wall serves a purpose.

“I give most of the credit to the students,” he said. “One thing I’ve always believed in is, you build trust. And when you build that trust, things just kind of come together.”

At North Columbia, his attentiveness to students and their lives has led to numerous examples of academic success. Students who entered with a second-grade reading level graduated with a 12th-grade level. Others got diplomas when they had assumed they never would. Rainier Superintendent Michael Carter told The Daily News, “In my 40-plus years in education, I have seen a lot of great teachers, and he is in the top.”

Elliott is 68 years old now and has promised his students he’ll teach for another year, and then “as long as you want me, I’ll consider it on a year-to-year basis.”

“I’ve had students who have told other people that if it wasn’t for me, they would have quit school,” he said. “And I tell them, all I gave you was self-confidence. With that self-confidence, you excelled. … You’re the one who did all the work.”

(Photo of Noah Elliott and his students at North Columbia Academy by Marissa Heffernan, The Daily News, used by permission. Photo of President George H.W. Bush shaking hands with Elliott on the flight line at Offutt AFB courtesy of Noah Elliott.)