Police respond to a mental distress call from a mother whose teenager is locked in the bathroom. Loud music in an apartment building prompts a neighbor to call the police when a language barrier prevents them from communicating with the family next door. And officers are called when two houseless men are trespassing in an empty home.

These are three snapshots from an implicit bias training acted out by Pacific University students for the Forest Grove Police Department. Students presented three 20-minute scenarios to officers, who rotated through all t 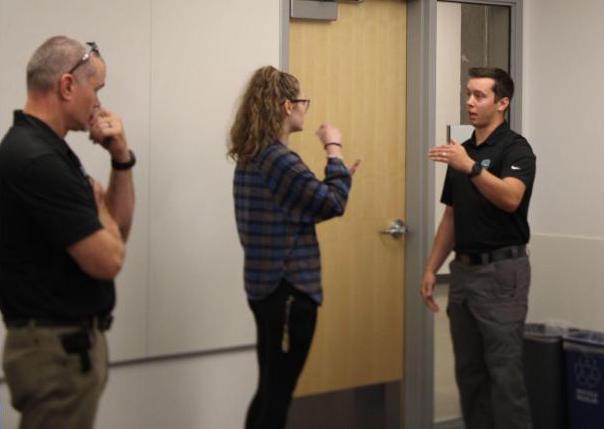 he scenarios then debriefed with facilitators. The private sessions, which took  place in October  2022, are part of an evolving partnership between the police department and the university that started 18 months ago with workshops and guest speakers discussing topics surrounding bias, race and policing.

“The training that Pacific brings us is just as important as the tactical training that we receive. It prepares all of us for the changing and complex world we live in,” said Forest Grove Police Chief Henry Reimann.

“Our ability to navigate in these complexities makes us better cops and humans. By doing this type of training on a regular basis, we are changing the culture around us, the culture within our profession, and we become better guardians for the people we serve.” 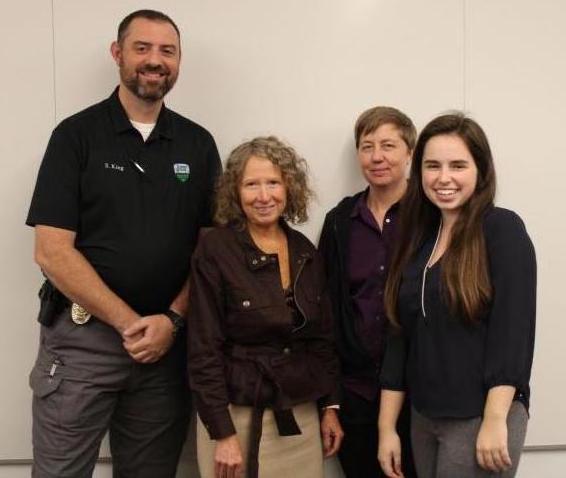 Pearl wrote the scenarios and hired eight Pacific students from across various disciplines to add to the project’s authenticity. She was pleasantly surprised to see the vulnerability that students and officers displayed and was proud of how the scenarios helped push the needle forward.

“These scenarios are great at cutting to the core of what’s important in a safe space,” she said.

“I told my actors, ‘Our job is to stress the officers out and see how they react to that stress, and in that safe environment they’re able to react and work on those tools of verbal de-escalation so when they’re out in the field making split-second decisions they know they have other options.’”

One of the biggest lessons officers learned was the importance of using non-gender specific pronouns to gain the trust of a teen or young adult as dramatized in the mental distress scenario. The importance of feeling safe, seen and heard was also echoed during the loud house party scenario, which provided officers the opportunity to practice using the language line to communicate with a French immigrant. Sgt. King praised facilitators Garcia-Chitwood and Whitehead for their role in the debriefs, which he felt allowed officers time to reflect. 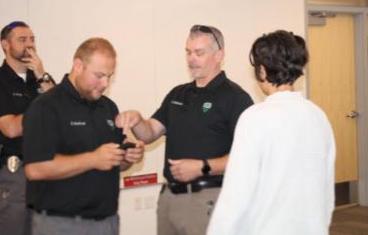 It was a learning experience for actors as well. Student Payton Broussard ’23, who played the role of the French-speaking immigrant neighbor, said she felt “invisible” and “disconnected” during the loud party scenario, and wished the officers had asked her name. Her feelings softened a bit following the debrief, when officers referred to the number and type of daily situations they respond to during a lengthy shift. Situations that she realized could desensitize someone over time. Some officers compared the experience to the arcade game whac- a-mole.

“I think if there was better communication, the stigma around police being aggressive and being so direct would lessen a bit,” she said.

“It’s important for the police to have a connection with the community and contribute to the community. I think people would act kinder toward each other if they felt they were in this place where they were understood by an officer when they make a mistake.”

As a sociologist, Whitehead is excited about the opportunity for change these scenarios can help encourage.

“That’s the potential of this scenario work because the actors aren’t just actors, they’re students, and they’re engaging with the police officers. The student actors paused to consider the kinds of constraints police face every day. It deepened their understanding for sure,” she said.

“Police benefited from this radical empathy training as well, because they spent time thinking about the scenario from the perspective of those who are often marginalized, stereotyped and misunderstood. Positive social change, particularly when it comes to racism and policing, can only really happen if we understand situations from the perspective of others.”

Since March 2021, staff from Pacific University’s Office of Equity, Diversity and Inclusion and faculty from the College of Arts & Sciences and the School of Graduate Psychology have presented workshops on bias in policing,  microaggressions and positionality to members of the Forest Grove Police Department, Community Policing Advisory Committee (CPAC), university students and employees and the local community.

In the fall of 2021, Garcia-Chitwood helped bring the Red Door Project to Pacific to continue building on the foundational knowledge the police officers had acquired. Pacific staff and faculty participated as facilitators as break-out sessions were created for the audience members to participate in conversations to discuss reactions to four videos involving bias and racial profiling.

That was followed up with “Tangled Up in Blue,” a community discussion at Pacific on Sept. 28, 2022, with author Rosa Brooks, a law professor, who wrote about her experience as a reserve police officer with the Washington, D.C., Metropolitan Police Department in the 2021 book Tangled Up in Blue: Policing the American City. The discussion, held in collaboration with the Washington County Cooperative Library Services, and initiated at the urging of Chief Reimann included law enforcement discussing state and local policing and procedures.

“’Tangled up in Blue’ provided an opportunity to critically analyze policing and understand the daily complexities of policing from the point of view of those in uniform, and also from the people that interact with the police,” said Garcia-Chitwood.

“The hope is to create shared understanding and experiences between the police force and the community in hopes of fostering empathy and trust, which can create more productive communication. Better communication between law enforcement and their constituents can lead to safer communities.”

The equity work of the Forest Grove Police Department under Chief Reimann aligns with Pacific’s mission "to think, care, create, and pursue justice in our world." He often reminds officers to be mindful of the “carbon footprint” they leave behind during their daily contact with the public. Moving forward, his goal is for officers to attend scenario-based trainings annually.

In the meantime, it looks like those trainings are already starting to bear fruit. Riemann reported that a mother recently stopped by the police department to compliment an officer for his display of noticeable compassion and patience with her teen daughter who was in crisis. For their part, officers are also reporting about the positive effect that the scenario trainings have had with their interactions on the job.

Whitehead hopes to get funding in the future to expand the number and scope of implicit bias trainings and to hire professional facilitators tailored specifically to each scenario’s topic.

She views this rare partnership as a model for other communities to have a university serving as a bridge between the police and the broader community. As an institution of higher learning, Pacific has the expertise to help create safe spaces for the public and the police to think critically about their roles in society and the effect of their interactions.

“What a university should be doing is laying the groundwork for a common understanding,’” she said.

“And if I think if we can have that kind of impact on our communities, then we hold a uniquely pivotal part in addressing systemic inequalities. That's how a university is involved in the pursuit of justice, finding that foundation for a shared truth, a shared understanding that can lead to more equitable social relationships.”