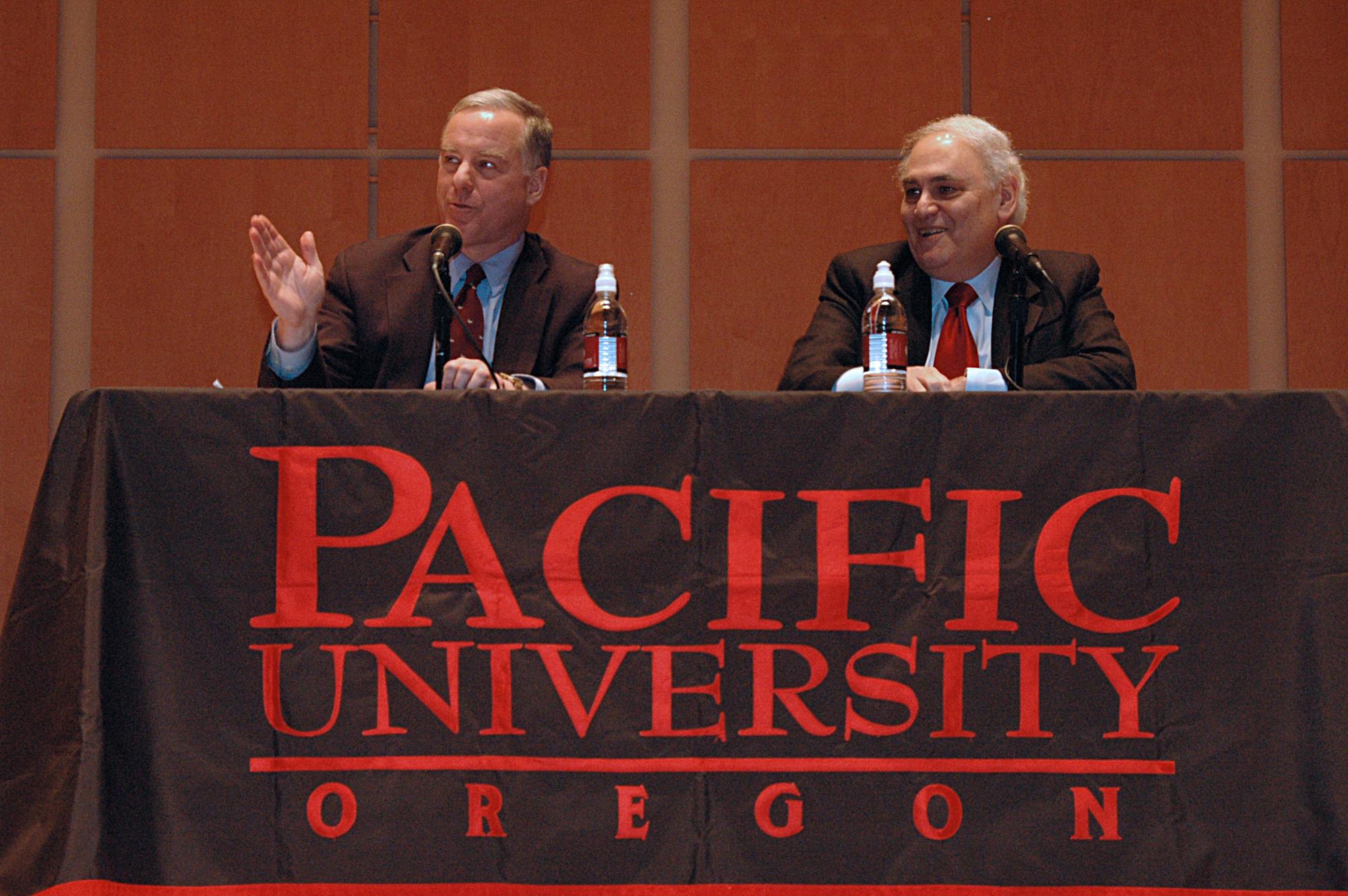 For more than quarter of a century, the Pacific University Tom McCall Forum was a fixture of the Portland political scene, annually bringing high-profile liberal and conservative politicians and pundits to the Pacific Northwest for a debate on public policy issues.

This fall, Pacific University takes a look back at the forum, its impact on thousands of alumni, and the current state of political discourse during a special event during Homecoming. A panel of four alumni and students, moderated by Jim Moore, director of political outreach for the Tom McCall Center for Civic Engagement, will share their recollections and thoughts during the Tom McCall Forum Retrospective. The free public event takes place at 4 p.m. Friday, Oct. 19 in the gallery of the Tran Library.

Panelists include Dan James ‘87, deputy administrator of the Bonneville Power Administration and a current member of the Pacific University Board of Trustees; Jennifer Hudson ‘98, governmental and public affairs manager for Schnitzer Steel Industries; Gina Mattioda ‘88, founding director of Multnomah County Office of Public Affairs; and Giovana Oaxaca ’19, a senior double-majoring in politics & government and economics at Pacific.

The Tom McCall Forum brought some of the country’s most well-known political figures to Oregon to engage one-on-one in a lively and spirited discussion that allowed attendees to better understand the reasoning between distinct philosophical differences about how to approach civic challenges.

Spearheaded by Pacific Politics & Government Professor Emeritus Russ Dondero, faculty and students founded the forum in 1982 as the Annual Politics and Law Forum. The event’s primary purpose was to engage Pacific students and provide them opportunities to connect with political movers and shakers. It was renamed in honor of former Oregon Gov. Tom Lawson McCall following his death in 1983. In 1991, the popularity of the event resulted in its move from Forest Grove to the Arlene Schnitzer Concert Hall in Portland, where it drew capacity crowds of 2,000.

The forum’s lively and impassioned debates led to several installments being broadcast on C-SPAN, including the 2005 matchup between Dean, then-chair of the Democratic National Committee, and Richard Perle, considered one of the architects of the war in Iraq, in which a spectator threw a shoe at Perle.

Dondero told Pacific magazine the McCall Forum was always about attracting students to Pacific, giving an opportunity to connect them with political leaders and inspiring them to civic engagement endeavors. “I always viewed the forum as a large classroom, not only for students, but for the larger community,” he said. “It was a chance for people to sit down and think about important topics.”

The legacy of former Oregon Gov. Tom McCall lives on at Pacific today through the Tom McCall Center for Civic Engagement, a host of the retrospective. The center promotes active citizenship by connecting students, faculty and staff with policymakers and partner organizations in the larger community for collaborations that contribute to the common good for the betterment of society.

Student panelist Oaxaca says participation in McCall Center activities has led her to hands-on opportunities, such as a recent internship with the office of local Congresswoman Suzanne Bonamici.

“The internship was the single-most eye-opening political experience I’ve ever had,” she said. “I've taken some of the knowledge I learned from it and applied it to my studies.”

She has stayed on as a member of Bonamici’s reelection campaign staff and intends to pursue a career in public service. She said the McCall Center gave her the chance she needed. “When you have the support and encouragement you need to succeed, anything is possible.”

Tom McCall Forum Through the Years

2006 | Tom Daschle and Pat Buchanan
Democracy at the Crossroads: Does Our System Work

2002 | Newt Gingrich and Ralph Nader
Who Rules America? Power in the New Millennium

2001 | Alan Dershowitz and Ralph Reed
Religion, Politics and the Constitution

1997 | Dan Quayle and Robert Kennedy Jr
Striking the Balance: The Economy and the Environmentalist

1996 | Mario Cuomo and Lynn Martin
From New Hampshire to November: Values vs. Votes

1994 | Pierre Salinger and John Sununu
The President and the Press: Who Sets the Agenda

1992 | Jesse Jackson and Peter Ueberroth
American Cities: An Agenda for the Next President

1991 | Geraldine Ferraro and William Bennett
Leadership in the 1990s: Democracy and the National Conscience

1989 | Arthur Schlesinger Jr. and Robert Bork
Law of the Land: Politics in Courts?

1988 | Pat Schroeder and Jeane Kirkpatrick
American Foreign Policy in the 1990s: Who is the Enemy?

1985 | George McGovern and James Watt
Economic & Environmental Progress: Is There a Free Lunch After All?

1982 | Cal Thomas and Sam Brown
The Moral Majority: A Debate

Pacific University is a small, but diverse learning community, where students thrive in a personal academic environment. Tracing its roots to 1849, when it was chartered as a school for orphans of the Oregon Trail, Pacific has long been devoted to making a difference in the world. Today, students study in a unique combination of undergraduate, graduate and professional programs in the liberal arts and sciences, business, education, health professions and optometry. Located in Oregon, Pacific serves a diverse population of more than 3,900 students, with campuses in Forest Grove, Hillsboro, Eugene and Woodburn. At Pacific University, students and faculty develop close, nurturing relationships that provide an extraordinary educational experience.