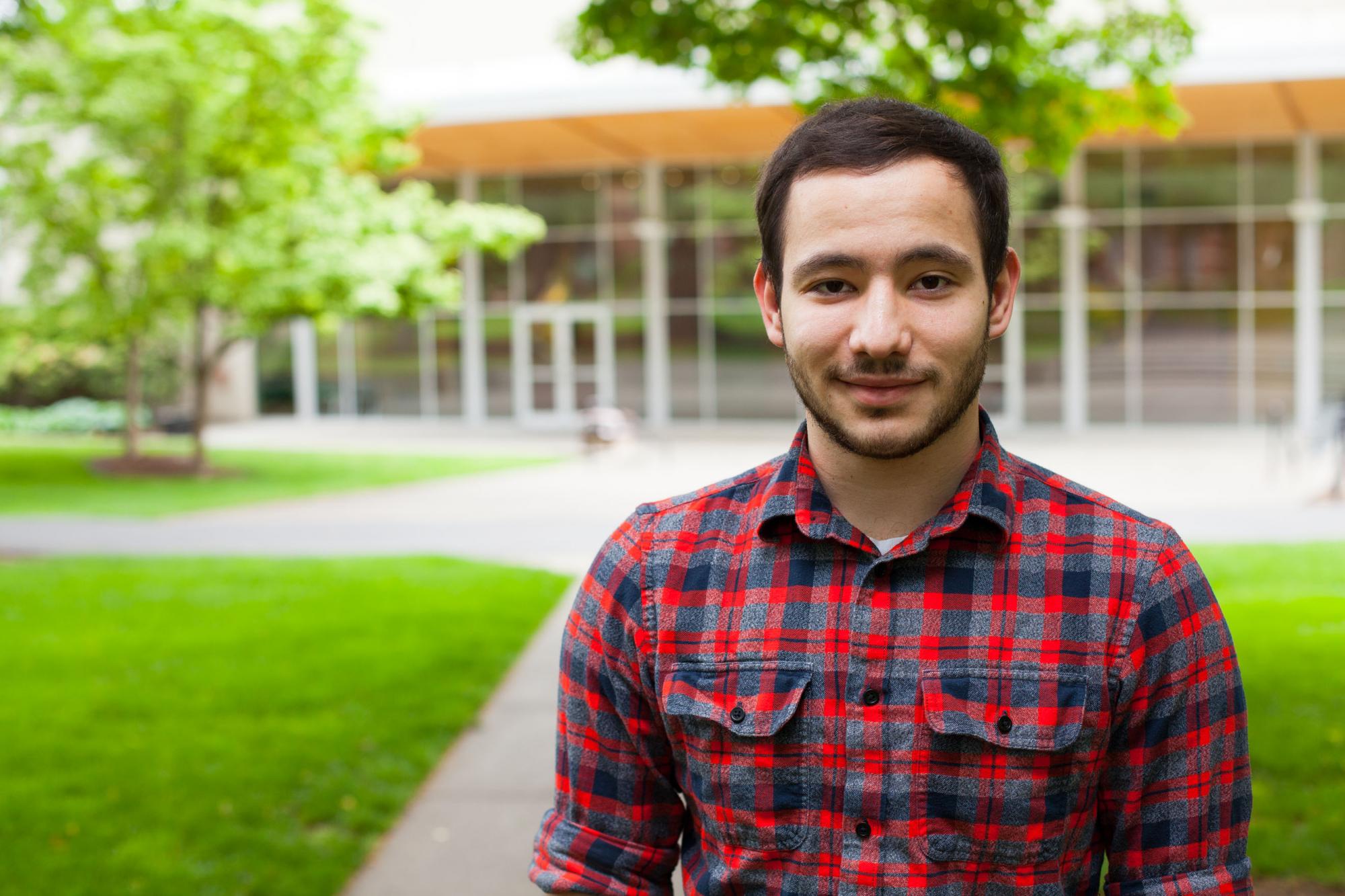 When Elijah Pine ’21 first visited Pacific University, he was one of hundreds of high school students attending the yearly Music in May festival. The experience shaped his life in ways he could not have imagined as a junior at Umatilla High School in Eastern Oregon.

Pine fell in love with the historic Forest Grove Campus and received a music scholarship based on his performance at the high-school music festival — factors that influenced his decision to attend Pacific when it came time to choose a college.

With the music and other scholarships, “it became less expensive for me to attend Pacific than to go to a public university,” said Pine, who participated in Music in May as a junior and senior in high school and is now a mentor in the program.

“I loved the look of the buildings on campus. I wanted to go to an older college with charm,” Pine said.

Pine initially planned to choose a major that would prepare him to study engineering but decided to follow his heart instead. Today, he’s triple majoring in music performance, music education and Spanish.

After graduating, he hopes to return to Umatilla to teach music at the junior- and high-school levels and put his Spanish-language skills to work for the rural school district’s many English-language learners.

Pine is one of thousands of students whose lives have been influenced by Music in May, which this year celebrates its 70th anniversary.

Some 34,000 high school students (roughly 500 per year) have participated in the festival since its founding in 1948 — drawn by the opportunity to learn from distinguished conductors and get a taste of college life.

Music in May is one of the country’s longest-running high school music festivals, and the only college-sponsored festival of its kind in the Northwest. The three-day event culminates in a packed final concert featuring orchestra, choir and band.

Like Pine, many students who participate in the festival hail from small communities in Oregon, Washington and Idaho, where they have limited access to private music instruction and few opportunities to perform in large ensembles. The program typically gets twice as many applicants as it can accept, owing to housing limitations and other practical considerations.

For his part, Pine, an oboe player, was self-taught before he first attended Music in May, which hires adjunct instructors, some of them Pacific alumni, to lead sectional rehearsals and offer optional private lessons.

The festival was founded by the late Richard Greenfield, a former Pacific music education professor, to encourage the development of string music in public schools. It grew significantly larger its second year, when band and choir were added at the suggestion of a local high school music director.

Over the years, Music in May has attracted its share of prominent guest conductors. The late Frank De Vol, one of Hollywood’s leading orchestra conductors in the 1940s, conducted the first festival.

The late Carmen Dragon, an Oscar-winning arranger, composer and conductor, was also among the festival’s earliest guest conductors. His hand-written notes on the string parts for America the Beautiful are still used in the final concert.

“We pick guest conductors with excellent reputations who also understand that this festival is designed to be a positive musical experience for all who come,” said Pacific’s Director of Bands Michael Burch-Pesses, who has overseen Music in May since he joined the university in 1995.

“We want to show students what it’s like to work with a professional conductor. We hope they take what they learn back to their own schools and improve their own ensembles,” he added.

Burch-Pesses is an award-winning conductor and music educator in his own right. Before he joined Pacific, he had a distinguished career as a bandmaster in the Navy. Even he’s learned a thing or two from the guest conductors who have participated in Music in May over the years.

As in the past, a group of Pacific students, including past participants in the festival, will serve as mentors to the high school students. They will stay in dorms with the younger students, share meals with them and attend rehearsals and social events.

For past participants like Elijah Pine, it’s an opportunity to give back to the program and gain new skills.

“It’s leadership experience and a great musical experience,” Burch-Pesses said. “Participants get to see some of the finest conductors in the country hold a rehearsal. They learn about techniques that professionals use to bring a band to concert-performance level.”