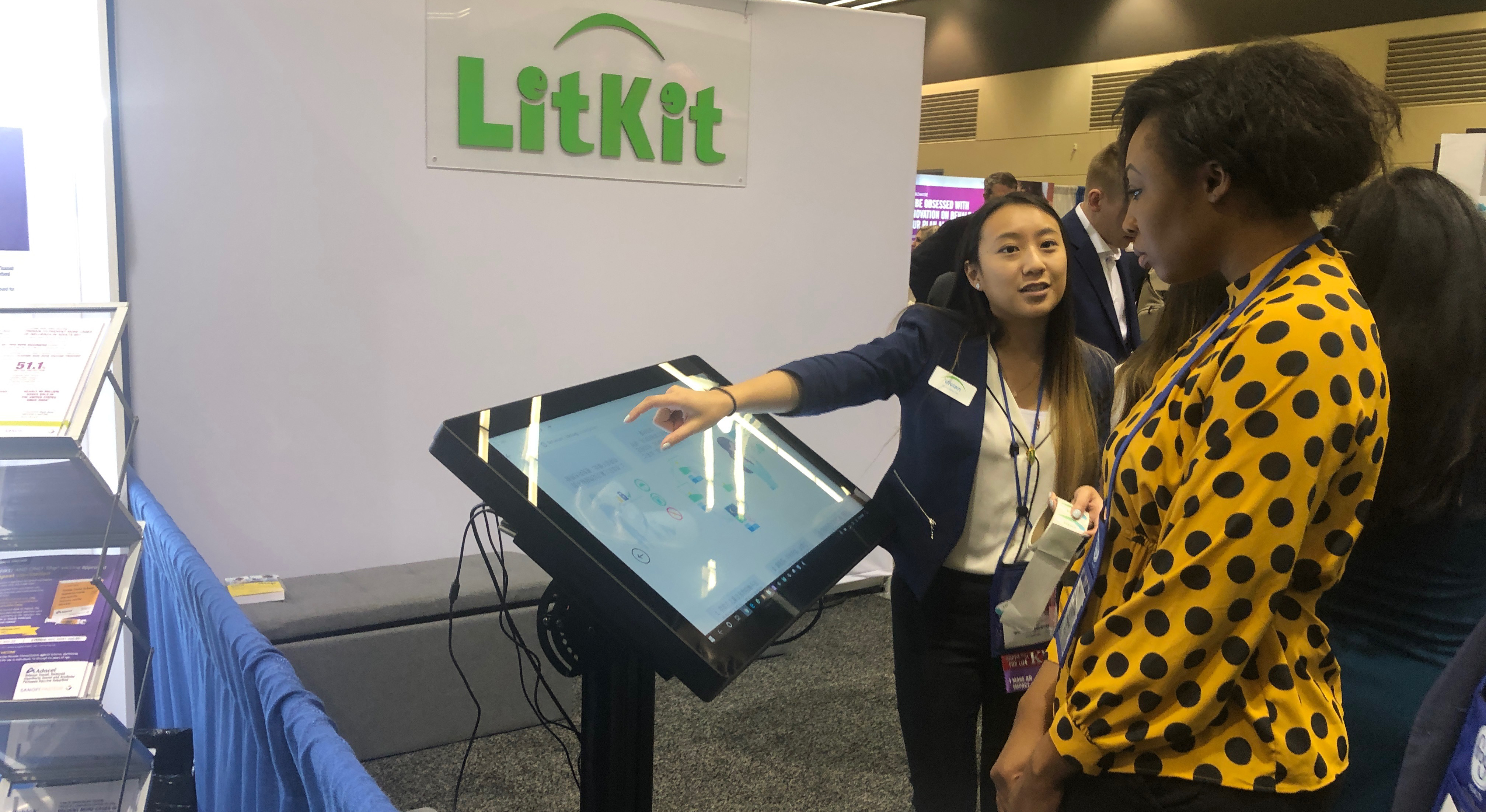 It’s a rare thing to encounter a student like Alex “Lex” Saucedo PharmD ‘19 and her team of partners, says Associate Professor Jeff Fortner.

The Pacific University School of Pharmacy students have been developing and marketing a mobile pharmacy app called LitKit.

In Fortner’s 10 years as a faculty member, he’s never seen a student push an idea so far, so fast and so well, he said.

“We’re pretty impressed and proud of them,” said Fortner, who was astounded to see the group in Seattle for the American Pharmacists Association annual meeting and exposition. The students had rented a booth and presented their creation to an eager pharmaceutical industry.

The mobile pharmacy app has multiple functions for patients, healthcare providers and students.

One version of LitKit is a handheld language translator that aims to help users understand instructions about their medications in their own languages.

It is an alternative to more costly translation services, in which pharmacists use an over-the-phone, on-call language expert to explain to patients how they should take their medicine and what side effects to expect — or worse, when patients leave the counter with a lot of uncertainty.

Saucedo said she recognized the need for something like LitKit years ago, after she experienced and witnessed patients who were confused after picking up their prescription medications. She started digging into how much they understood when visiting a pharmacist.

“Information should be conveyed in the easiest manner to be understood,” she said.

LitKit strives to make it so. A product demo Saucedo posted to YouTube offers a glimpse of the way a pharmacist and a patient can collaborate to share information: The video shows an Arabic-speaking patient getting information in the form of video, audio and Arabic-language text, as a pharmacist can guide and follow along in English. The service initially will be available in English, Arabic, Spanish, Korean, Russian and Mandarin. This version, which Saucedo calls the translate version, may be ready by the end of the year.

A different version of LitKit, the study version, is a compact, English-language database that contains manufacturer’s information for hundreds of prescription drugs and medical devices, such as inhalers. Saucedo believes students, pharmacy schools and professional healthcare providers are strong potential markets for the study version, which she hopes to be able to offer this fall.

An earlier version, called the point-of-care version, provides translations of some common instant tests such as blood sugar and blood pressure.

LitKit is a tiny new player within a narrow niche of a very large market for translation services. The research consultancy Nimdzi Insights estimates “conservatively” the global revenues for language service providers was $50 billion last year.

How’d they do it?

Saucedo developed the app on her own dime, mostly with borrowed money while in pharmacy school.

She has leaned heavily on fellow student Vivian Chau PharmD ‘19, who has largely kept the project on schedule and moving forward.

Chau, like Saucedo, comes from a family of immigrants and has seen relatives and friends struggle to understand a pharmacist’s instructions in their native languages.

For them LitKit can make an important difference. The ability to bring some clarity to patients about their medicines, Chau said, “is a personal issue.”

She is the 100 percent owner of LitKit and hopes her company can remain independent. She’s already turned down an unsolicited $5,000 investment that would have given her a minority stake in the company.

While some of her teammates are focused on finishing school, Saucedo and Chau graduated from Pacific with their doctor of pharmacy degrees in May and plan to continue with the project.

Chau will do so while taking a residency at the Department of Veterans Affairs hospital in Roseburg.

Saucedo, however, is completely committed to LitKit. “I’m not applying for any residencies,” she said. “I’m working on this every day.”

Saucedo hasn’t fully figured out product pricing yet, but says she is determined to dedicate a portion of sales revenue, say $5 per purchase, to a pharmacy student scholarship fund.

Saucedo’s ambition for LitKit is to create a service that not only makes information understandable to people in their own languages, but helps democratize access to quality health information. She wants it to do nothing less than “create equal opportunities.”