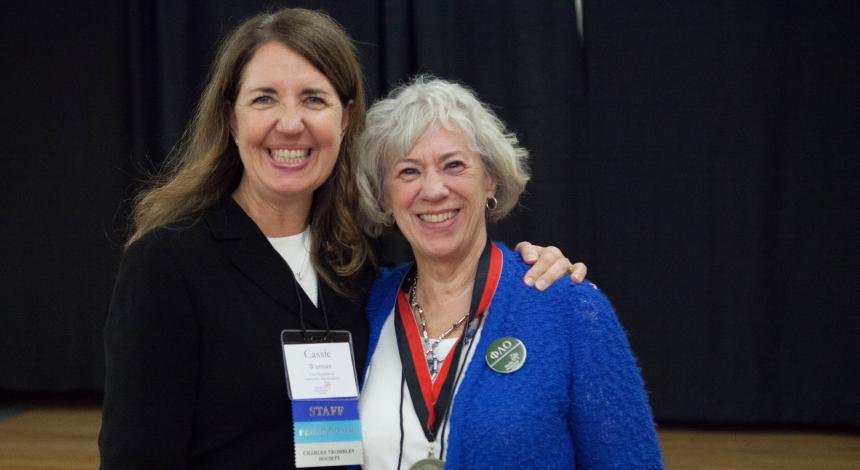 At least, that’s what one high school counselor told Barbara (Williams) Crandall back in the 1960s.

“My parents felt we could do whatever we set out to do,” she said. “I’m so thankful that my parents valued education. So many parents of people I’ve known, women my age, thought that we were supposed to become a secretary or a nurse, or maybe a teacher, or just get married. It was a whole different mindset.”

Getting to Pacific wasn’t easy for Barbara, but she made it into the Class of 1966. She remembers the day her acceptance letter came and her parents apologizing, saying the promised scholarship wouldn’t be enough for the family to afford the school.

Her parents contributed what they could — an amount Barbara now is amazed by. “I didn’t appreciate it at the time, but I realized what a huge amount it was later. $90 a month for something extra for them was phenomenal.”

She sought out external scholarships and worked, relentlessly.

And, she majored in math. Math and science majors were especially popular in the 1960s, and several Pacific University alumni went on to work for the government, for NASA, and in the early days of computers. The math professor at the time — Dr. Andrewa Noble — was, herself, a pioneering woman who had earned a PhD in the 1920s and was very popular among students.

“She was a great advocate for her students,” Barbara said.

Still, women were rare in the department.

Barbara went on to work for a research scientist at Oregon Health & Sciences University. When her, late husband went into business in Lincoln City, Ore., she went to work for the school district, where she was on the cutting edge of developing software at the time.

“We had such a small crew, and we really were doing innovative things,” she said. “We were very pleased with what we were able to do with limited resources and to help ease the burden for staff in the schools and offices.”

She received the Lincoln County School District Superintendent’s Award twice for her work for the district. She also earned a Lincoln City Community Involvement Award for her work developing a teen club offering safe weekend activities for students.

In 2012, she was named the Lincoln City Woman of the Year Award, which she attributes to her work in the community. Her church sponsors two free community meals a month: “It’s a hot meal with no questions,” she said. “We have people who are homeless, kids from the skate park. For some, it’s a social thing.” A group from the church — three-fourths of whom are Pacific alumni — also founded Peace Village, a summer daycamp designed to expose children to different cultures and ideas, now in its 22nd year.

Fifty years after graduating, Barbara still remembers the power of her time at Pacific.

“The academics were great, but I think what I most took away was the relationships, the friendships,” she said. “It was the first time, outside my family, that I felt a real sense of community and how important it is.”