Students Keep Returning to B Street Farm, Where Sustainability is Always in Season 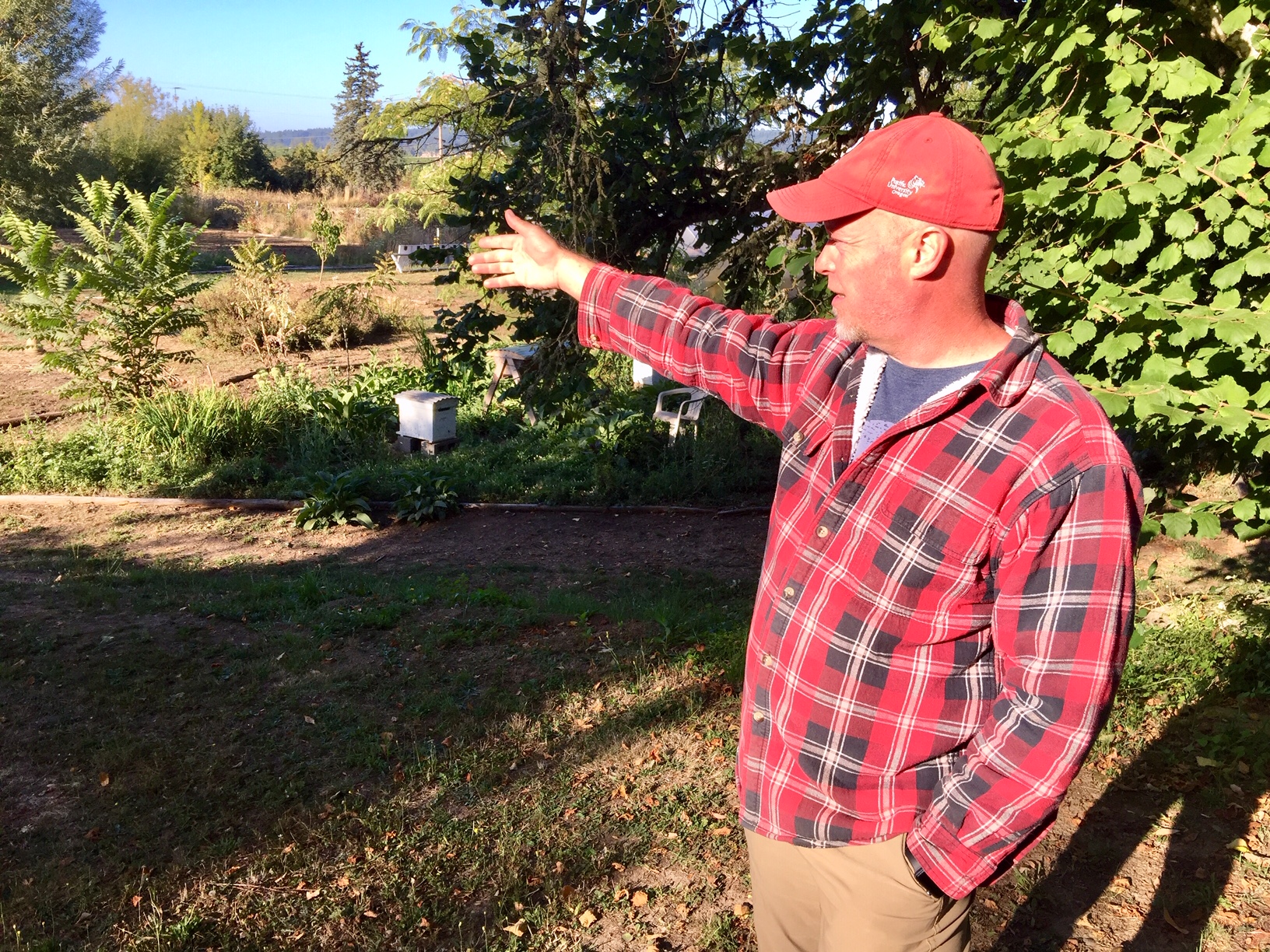 At the B Street Farm, it's another pefect day; a matchless August morning in which the peppers are turning color, the tomatoes are weighing down the vine, and tart, indigo mulberries are tucked under a tree’s green leaves.

On some other days, the untended basin next to Gales Creek fills up with the creek’s overflow; a night visitor has damaged plants by plowing through the vines; the ground is boggy and the workroom is damp and chilly.

The four-acre farm is a green extension of Pacific University, tucked off B Street about a mile south of the Forest Grove Campus. It’s a place where students may feed rabbits, pick vegetables, and build hydroponic growing systems; where fresh produce is grown for use by the campus food service; and where members of the community can collect free vegetables, or swap them for others.

“The goal is to get organic food into the mouths of the people who need it most,” said farm manager Ron Calkins, who has been on the farm for six years. “That’s a win-win.”

For example, Calkins and his student workers deliver organic produce to the Interprofessional Diabetes Clinic on the Hillsboro Campus, where it is offered to people to low-income and underinsured people who are managing their diabetes. This can include Pacific students.

Michelle Larkins, who directs the Center for a Sustainable Society and oversees the farm, said Pacific students are encouraged to stop by the farm Monday through Friday to pick whatever food they want.

Calkins delights in strolling among the vines and the ripening plants. He points out the three types of broccoli, the various varieties of hot peppers, the plethora of squash. He stops before a crabapple tree, groaning with ripening fruit.

“This tree is kind of famous,” he confided. It was the source of McMenamin’s B Street Crab Apple Shrub, a drinking vinegar concocted at the Grand Lodge in Forest Grove.

The farm, once known as the B Street Living Museum, is a place where students can learn, develop, refine and demonstrate projects of their own. Students in the Biology Department are growing deadly nightshade to examine effective ways to manage it. Other students took readings of sound levels inside the greenhouse, checking for birdsong and other indicators of life. One student even brought in roadkill, so that she could extract tiny bones that could be incorporated into her handcrafted jewelry.

It’s a vivid laboratory for sustainable food practices, overseen by the Center for a Sustainable Society as part of a university-wide initiative to promote sustainability in its buildings, landscape and campus practices. The farm is also a bridge to the community outside. Larkins guided a tour recently for the Hillsboro Active Seniors Group. Kindergartners have also visited.

This sunny morning on the farm, a car pulls up, laden with produce grown elsewhere — corn, apples and other vegetables — and spread out on tables in the farm workroom. It will be traded and mixed to become a shipment of fresh vegetables to be taken to the Forest Grove Senior & Community Center. 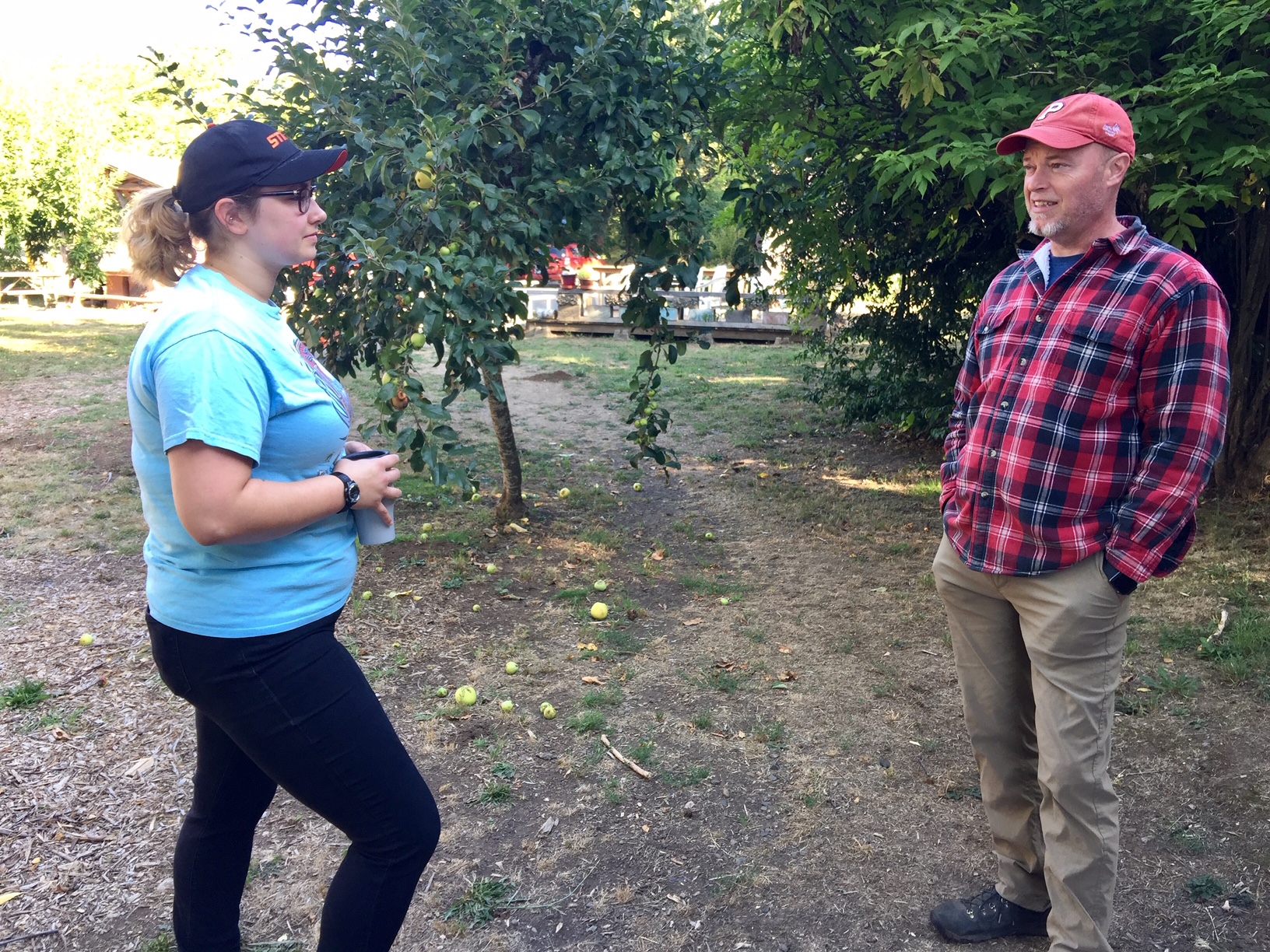 Soon Pacific faculty members will start bringing their classes to the farm for a visit, or discussions about agriculture or the food supply. Calkins said he’s worked with students doing capstone projects, with interns, with work-study students and others. He’s hosted school children who study the tiny pond, the enclosures of willows and the beehives.

Allison Hisey, a Pacific senior majoring in applied sustainability, returned to the farm this week for a fourth year of work-study. She spent her last semester studying in Ireland, so this week was a homecoming of sorts. Calkins is delighted to see her. She shows him a new tattoo. They start discussing what’s changed since she was last here.

That’s the way it is on the farm; once the dirt gets under your fingernails, it’s hard to be satisfied sitting in a classroom. Students tend to keep coming back.