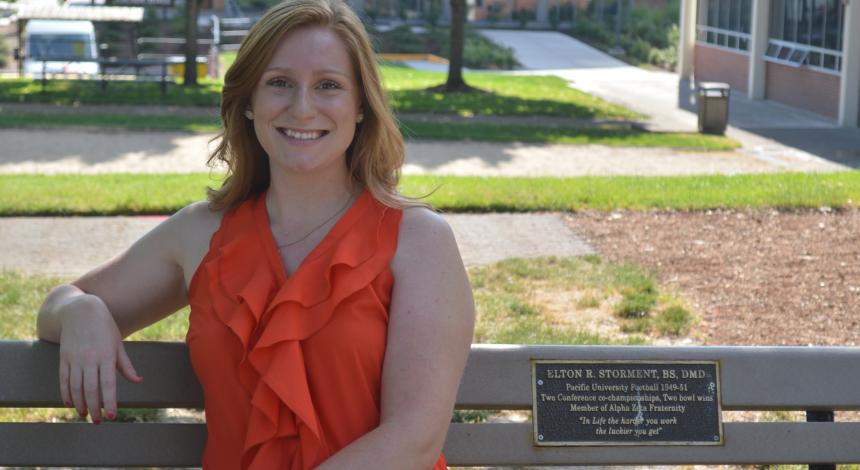 Ashleigh Walters PT ’12 remembers working with a developmentally delayed boy in his home.

The 2-year-old needed to learn to crawl up the stairs of his home, but his mother struggled to teach him how.

Walters placed his favorite blanket on the fifth step. The boy crawled to get it on his first try.

“Not everything requires a special piece of equipment or expensive toys,” Walters said. “Sometimes it’s just knowing what it is your kid is really motivated by.”

Walters is a physical therapist who works with young children with developmental delays or diagnoses such as Down syndrome or cerebral palsy. An early intervention specialist, she works with educational programs to provide in-home and in-school therapy for children and to help empower their families.

Walters didn’t always know she wanted to be a physical therapist, but now she can’t imagine doing anything else.

In high school and college, her interests jumped from international business to veterinary medicine and elsewhere.

During her last year of undergraduate study at Oregon State, she completed a mini-practicum to gain more experience. As a volunteer, she was tasked with playing with children as they practiced using walkers or worked on balance and strength.

“When it’s kids, it’s play,” Walters said. “You basically find ways to make them learn those skills by playing. I thought, ‘Someone would pay me to play with kids? I think I could do that.’ So then I looked into physical therapy.”

She found her place in the Pacific University School of Physical Therapy, a three-year doctor of physical therapy program at Pacific’s Hillsboro Campus. She served as a student ambassador, talking to prospective students about the school, and as class treasurer.

Most importantly, though, she gained clinical experience that prepared her to launch a career doing exactly what had brought her to the profession to begin with.

She participated in the school’s annual summer trip to Fuling, China, where health professions students volunteer to provide training and support to staff at an orphanage for children with disabilities. She also gained rich experience in a variety of practicum placements throughout the West.

Her favorite was a placement with the Clackamas Educational Service District, an eight-week early intervention rotation working with children from birth to age 3.

“I didn’t really understand the role of physical therapy in educational programs, but it involves kids, so I went for it,” Walters said. “I ended up falling in love with it and realizing this is exactly what I want to do with my life and if I can’t do it, I will be really upset.”

In that placement, she traveled to children’s homes and schools to provide on-site physical therapy.

“You have to really think on your feet,” she said. “What can we do with a rolled-up blanket, some pillows, and this jump rope or hula hoop? Anything you can find.”

After graduating from Pacific in 2012, she took a job with a similar organization, the Educational service District 112 in Vancouver, Wash. She spent part of her time in early intervention with young children and part providing services for school-age youth, ages 3 to 21.

“It was a little overwhelming, especially for a new graduate,” Walters said. “But it did reinforce my love for birth-to-5, that age range. Those were my favorite days.”

Two years later, she went on to her current position with the Multnomah Early Childhood Program, working with birth to 3-year-olds.

“I feel really lucky to have found what I want to do for the rest of my life,” Walters said. “I do think it’s good to get out of your comfort zone and try new things, but for a long time, I would like to be doing this.”