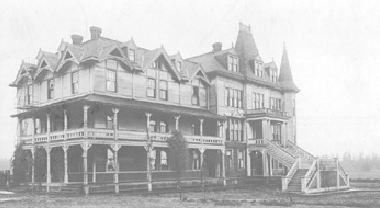 This Women's History Month we have been highlighting important Pacific women in our history. This week, we look back to Ladies Hall, later named Herrick Hall, and how it provided more women with the opportunity to attend Pacific.

In the early years of Pacific University, Herrick Hall played an important role in enabling more women to come study and earn their degree. Originally constructed in 1883 the all-female dormitory building, at that time known as Ladies Hall, provided a living space for women who did not already have a home in Forest Grove.

Herrick Hall was a three-story building with a mix of both single and double-bedrooms and bathrooms on each floor. Each room came furnished with a bed, mattress, desk, sink and heater.

Second university president, Reverend John Russell Herrick, helped raise $16,000 to build Ladies Hall, and it was renamed after him in 1887.

At 11 a.m. on Sunday, March 11, 1906, chimney sparks fell on the roof and an east wind began the first flames of a devastating fire. At the time, residents were attending church. Luckily, Professor F.T. Chapman soon discovered that the building was burning and alerted others. Many contents of the building were saved due to the fact that the fire had started at the top of the building but sadly, the building itself could not be rescued from the flames and took a full three hours to burn to the ground. Thanks to the efforts of the fire department, students and citizens the fire didn’t spread to any other buildings on campus.

The second Herrick Hall was built in 1907 and construction was funded through a combination of women’s fundraising and a Carnegie Foundation donation of $10,000.

Herrick Hall continued to be an all-female residence hall until 1958.

Sadly, the first fire was not the last brush Herrick Hall had with flames, the second Herrick Hall also burned on January 2, 1973. The building was then razed due to age, but the memories of Herrick Hall still live on.