A Car Crash Leads to a New Path

Amber Smith '20 still doesn’t know how she drove herself home after the accident.

When her car was rear-ended in a Portland suburb near her family’s house, her head snapped hard against the steering wheel, then against the seat back. She suffered a severe concussion. And, while she had no broken bones, she also sustained damage to her back, neck and her limbs.

Somehow, she drove herself about a mile and a half back to her family’s house, and her family took her to the hospital, where she was diagnosed with a traumatic brain injury and other issues. Suddenly, she wasn’t a promising college freshman biology major; instead she was a woman who needed to relearn how to walk, perform simple tasks, and remember how to take in information, analyze it and act on it.

It was a dramatic setback, physically, cognitively and emotionally. Smith had always been a high achiever, meeting and surpassing her goals and deadlines, but now she was bound to simple, repetitive and lonely routines. Because she had to embark on intensive occupational and physical therapies, she took a leave from Pacific.

Away from her classes and professors, she worked hard to return. She made it back to campus the following fall, but she knew better than to plunge immediately back into the demanding coursework she normally would have taken. Instead, on the advice of her advisor, she took a light load of physics courses required for her biology major.

She was careful in her expectations, just hoping to be able to concentrate on her studies. But a funny thing happened.

Something about the accident seemed to have rewired the way she processed information. She had flourished as a biology student, but now physics appealed to her. Biology required significant memorization; physics, she said, “is more problem solving.” 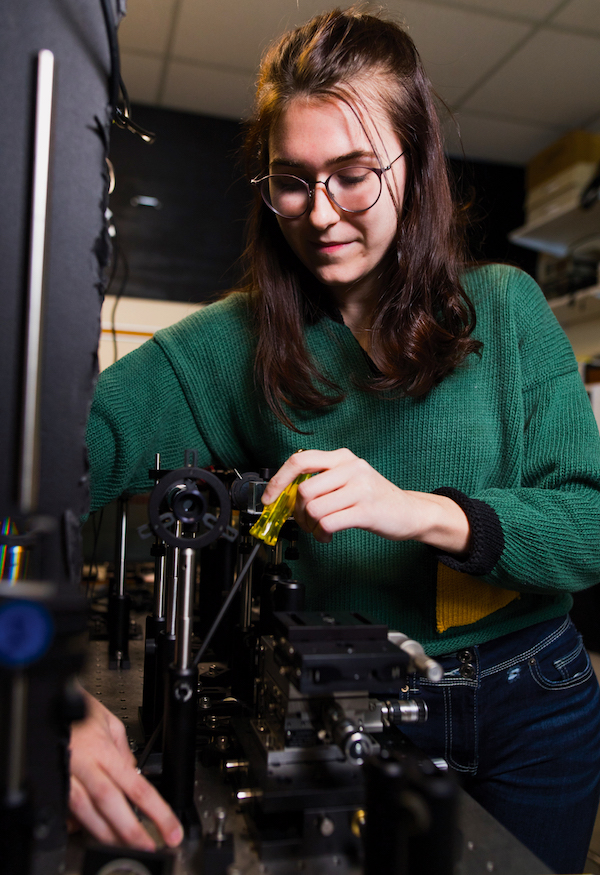 Since then, she’s switched her major to physics and is conducting research with Physics Professor James Butler, examining the behavior of fiber-based optical systems that may have the potential to “heal” themselves when they are damaged. The work, they think, may someday be applied to fabrics, such as jackets that motorcyclists could wear to better protect themselves in accidents.

Smith is the only woman among the small contingent of graduating physics majors, and she’s writing a grant proposal for a women in physics club that she hopes will encourage other women to pursue physics degrees.

She’s also the latest recipient of two scholarships for physics students, including the Griffith, Fehrs and Brosing Summer Physics Research Endowment, which paid her as she conducted research last summer. It’s the latest in a series of financial supports that have made her Pacific experience — especially with the medical hiatus — possible.

“My family’s not super financially fortunate, so college was something I had to figure out how to pay for,” she said. “Pacific definitely has crazy good scholarships.”

When she graduates this spring, she plans to take a year off to assess which direction to steer her career. Perhaps she’ll seek an advanced degree in physics. Perhaps she’ll enter medical school. But she already has one idea.

“I’ve found this passion of wanting to potentially study how your brain kind of switches gears once you’ve had a traumatic head injury,” she said. “If it happened to me, maybe it would be helpful to other people to learn more about.” ■

Amber Smith '20 is a recipient of the Griffith, Fehrs and Brosing Summer Physics Research Endowment, created by and in honor of three beloved former professors at Pacific. Continue their legacy and support the work of students like Amber with a gift today.
GIVE TODAY