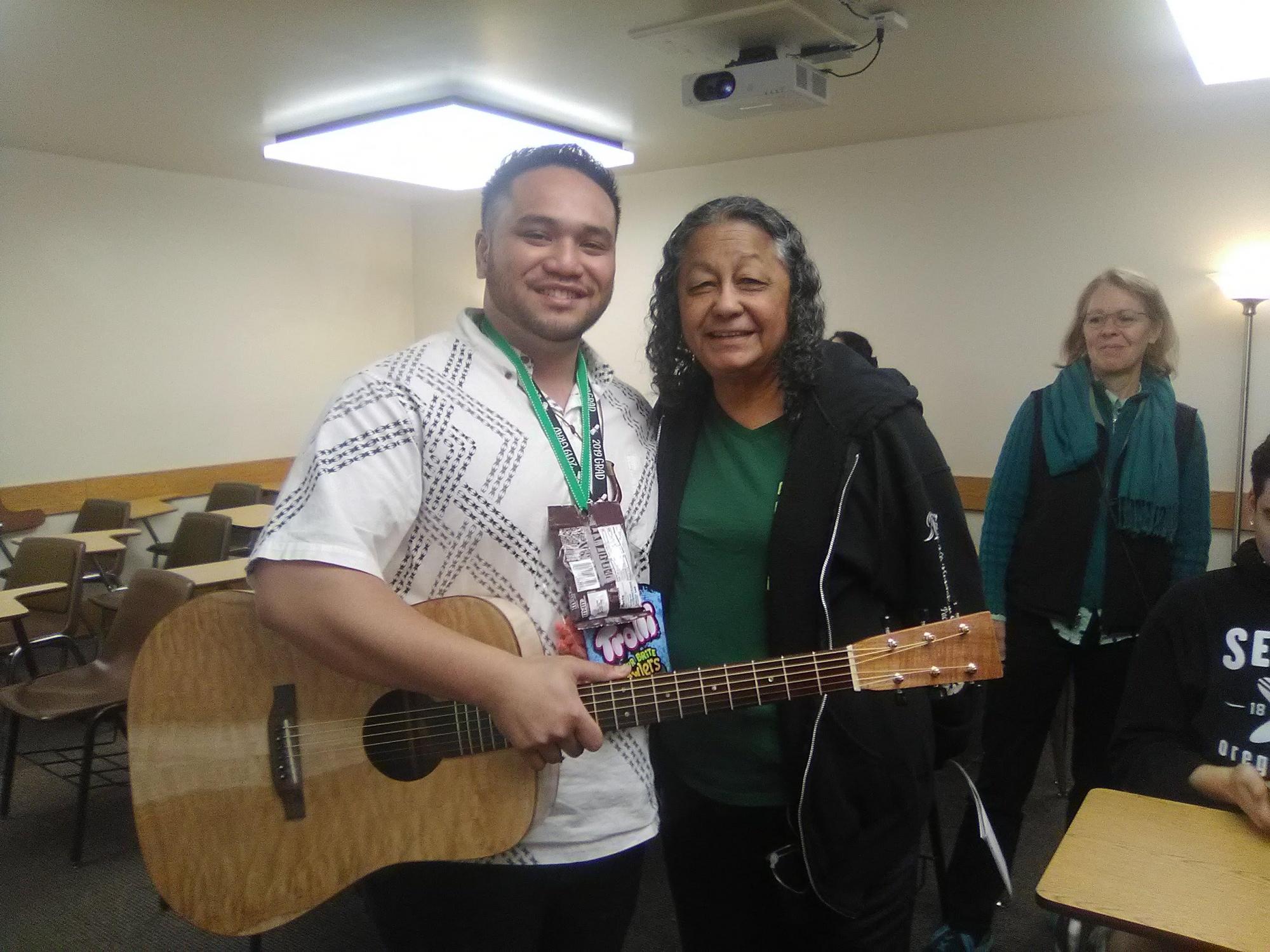 Authenticity matters to Brandon Naihe ‘19. Truth to self, and truthfulness to others, are the keys to his happiness. It’s little wonder, then, that taking shortcuts is not an option.

Naihe, who graduates from Pacific University on May 18 with a bachelor’s degree in art design, worked feverishly to make sure that his senior capstone project at Pacific was perfect. After all, it represented not just the culmination of his college education, but also his love of his culture and community.

The art major started his college years at the University of Hawaii at Hilo before becoming one of just 1,000 applicants nationwide —and one of just three from Hawai’i — to receive a Bill Gates Millennium Scholarship, enabling him to pursue his dream of a college education on the mainland.

He enrolled at Pacific in August 2016 and immersed himself in designing functional art with wood and other materials. For his capstone project, he constructed a fully functional acoustic guitar — one made of woods native to both Hawai’i and Oregon to represent where he grew up and where he lives now.

“In making the guitar, I knew how hard the job would be,” he said. “It’s not something an average person could go and make, but I wanted to do it anyway.” Construction requires taking a painstaking amount of precise measurements that must be spot on to ensure the wood is cut properly. “The measurements are very small, but accuracy is crucial. If the cuts are too small, the guitar loses its sound quality. If they’re too big, the guitar won’t function at all.”

Technically, Naihe finished the months-long project a week before the presentation day. It was well-constructed and aesthetically pleasing, a local guitar shop owner told him, but needed adjustments for optimal function. Adjustments that would take more than a week to complete.

So for the next week, Naihe skipped sleep, trying to identify a solution. He finally did, two days before the big day, ingeniously using a piece of paper to align the guitar strings, resulting in optimal sound.

“I had to be able to present, not only the art and the cultures of where I grew up and where I am now, but also the music of my culture as I learned from my family back home, including my Uncle Kaleo,” he said.

In the meantime, as a member of Nā Haumāna O Hawai‘i, the university’s Hawai’i student club, he also took a lead role in helping produce one of the largest Lū‘aus outside of the Aloha State, helping organize the musical performances and designing the 50-foot stage backdrop — twice.

Longtime advisor Aunty Edna Gehring had asked Naihe to redesign new artwork for the backdrop for her final Lū‘au in 2018. Naihe’s design included an erupting volcano with lava, as well as the Hawaiian fire goddess Pele. The design was originally intended to be the backdrop for the next several years. But when the Big Island suffered severe destruction in 2018 from a volcanic eruption, public sentiment prompted a new backdrop design.

He has his sights set on an advanced degree in design on his way to a career working with wood. “I love woodworking because it is a meditative and not something that a lot of people choose to do, but something that everyone admires,” he said.

When he decided to leave his small Maui hometown of Hana to perfect a craft, he did so with the intention of one day returning to share his knowledge. “When you graduate high school in Hana, you do one of two things: You stay home to perpetuate the practices of our culture within the community or you leave to gain knowledge to take back home,” he said. “I really hope to go back home and help my community."