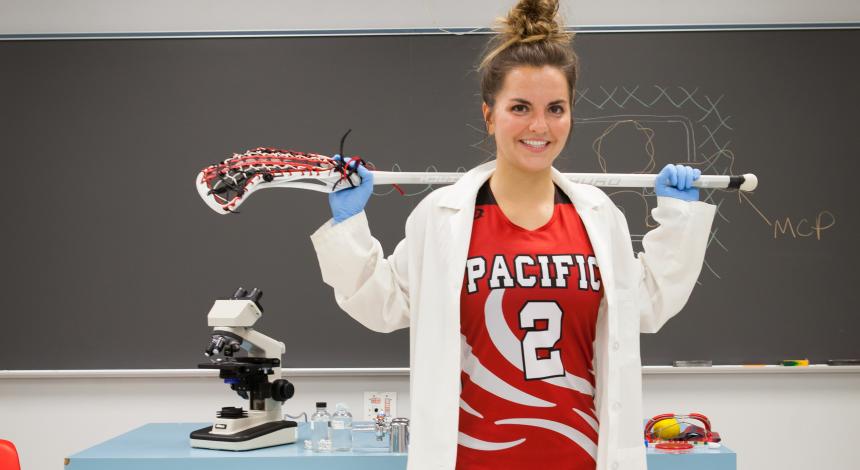 Mallory Hiefield ’17 didn’t know much about lacrosse when she came to Pacific University.

Her twin sister, also a Boxer, had played in high school, but Hiefield was more focused on running.

The opportunity to compete in college cross-country is part of what brought Hiefield to Pacific, but after a couple of seasons of running, she found herself lured to lacrosse with her sister.

“It was a cool experience,” Hiefield said. “I’d never played before, and all of the sudden I was playing at a high level.”

Plus, the young team won the Northwest Conference Championship in 2016, her first year with the team.

That’s the kind of thing that only happens at schools like Pacific, Hiefield said.

Especially because her multi-sport participation is only one aspect of her Pacific experience.

“I like the lab, analyzing genomes,” she said. “It’s more of a hard science, with more funding for research.”

She’s still interested in health, though, too, teaching fitness, pursuing a personal trainer certification, working for Outdoor Pursuits and minoring in outdoor leadership.

She also already completed her minor in Spanish, where she enjoyed volunteering with elementary children at a bilingual school.

She also will serve as president of the Undergraduate Student Senate in 2016-2017.

After growing up nearby in Portland, Hiefield admits she wasn’t always sure Pacific was the right place for her.

“At first, I thought I was ready to go away and get out of the rain,” she joked. “But I’m really glad I decided to stay at Pacific.”