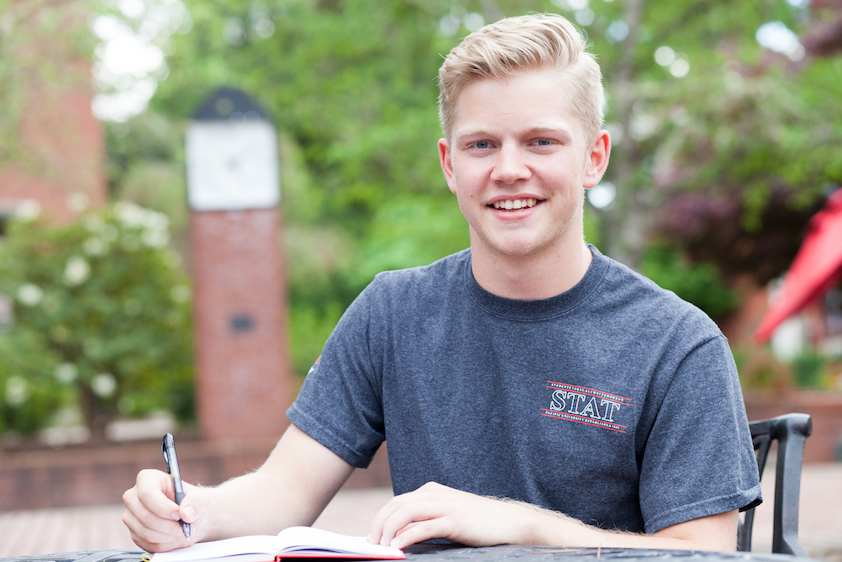 Skyler Erben ’18 is on a mission to do well by doing good.

The first in his family to attend college, Erben graduated from Pacific University in May 2018 with a bachelor of arts in economics, and he’s already landed a trainee opportunity at TriLinc Global, a leader in the growing field of impact investing. The goal of impact investing is to make money and a positive social and environmental impact.

“I view a career in impact investing as a path toward a comfortable life. Yet I don’t have to sacrifice any ethical or moral feelings to pursue my dream of working in investment management,” said Erben, who came to Pacific as a transfer student and has helped pay his way through college by working at various jobs.

Although he’s just getting started in his career, Erben is no stranger to his chosen profession. At Pacific, he played a lead role in the Pacific Impact Fund — a nascent, student-run fund that reflects the university’s commitment to sustainability.

When students called on the university to consider sustainable investment strategies, President Lesley Hallick and a university trustee provided $10,000 in seed money for the impact fund, giving them a chance to demonstrate their ideas.

In 2017, Erben was part of a group of students that picked the fund’s initial investments in socially and environmentally responsible exchange-traded funds, or ETFs.

He got deeply involved in early 2018, when he joined Pacific’s Center for a Sustainable Society as an intern tasked with helping to plan the fund’s future. The fund is co-sponsored by the center and the College of Business.

At the center, Erben worked under Director Michelle Larkins to create a three-year strategic plan for the fund. He also developed an asset allocation strategy that will be used by Pacific students long after he graduates.

The fund will continue to be managed by competitively selected interns in the Center for a Sustainable Society. It will invest in a carefully screened group of socially and environmentally friendly mutual funds and/or ETFs. At some point, it may also invest in individual stocks and bonds.

“Our mission is to utilize impact investing to demonstrate to the Pacific community that investment returns and social responsibility are not mutually exclusive,” said Erben, adding that the fund also gives students an opportunity to learn about money management through the lens of sustainability.

The vision for the fund, as outlined in its new strategic plan, is to reach $20,000 in assets under management by 2021. After hitting the $20,000 mark, the fund will begin to function as an endowed fund, distributing a percentage of its assets in the form of scholarship money.

Erben and others also hope the success of the fund will encourage Pacific to make a bigger commitment to impact investing by allocating a portion of its endowment to the strategy.

“We view the fund as an embodiment of the university’s mission to think, care, create, and pursue justice in our world,” said Erben, a recipient of the Alumni Association’s 2018 Outstanding Graduate Award for the College of Arts & Sciences.

Erben’s involvement with the Pacific Impact Fund was one of the highlights of his time at Pacific. But he first discovered his passion for investment management the summer after his sophomore year, when he worked as an equities-analyst intern at Cascade Investment Advisors. The firm specializes in investing in undervalued securities on behalf of individuals.

“That was my first exposure to investment management, and it’s what sealed the deal for me,” said Erben, who went on to do an internship with McGee Wealth Management in 2017. At McGee, he designed proprietary asset-allocation strategies with an emphasis on sustainable investing, among other tasks.

This summer, Erben will work as a credit trainee at TriLinc Global, an impact investing fund sponsor. TriLinc funds have invested more than $700 million globally by providing growth-stage loans and trade finance to small and medium-sized companies in Sub-Saharan Africa, Latin America and other developing markets.

Last year, Vulcan Capital, founded by Paul Allen of Microsoft fame, announced that it had decided to seed the launch of a TriLinc fund investing in socially-and-environmentally-conscious companies in developing economies.

“I’ll learn the fundamentals of what credit analysis looks like from an international perspective,” Erben said. “A lot of these investment opportunities are in emerging markets, and there are a lot of nuanced challenges that come along with that.”

Although Erben is bullish about the power of impact investing to change the world, he believes there are many ways to make a difference and to measure success in life.

“You don’t have to go and work in impact investing and emerging markets to help the global community,” he said.

“You can start by buying the person’s coffee behind you in line. Thoughtful tasks like that are what get me really excited, and I want to share that with people. If I die and there are more people that think that way when I die, then that’s a successful life.”