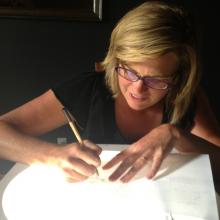 Introduction to Gender and Sexuality Studies

Winged is also included in the Kid On Hip, Camera In Hand screening program and DVD.

The Wind in Our Hair (recently completed 2014) Digital Video

Screened at several film festivals and for biking groups across the United States. It was awarded Best of Oregon,     "Dramatic Film” Oregon International Film Festival (OIFF), Eugene, OR (September ’15)

Close As Brothers (2020) which has been awarded: