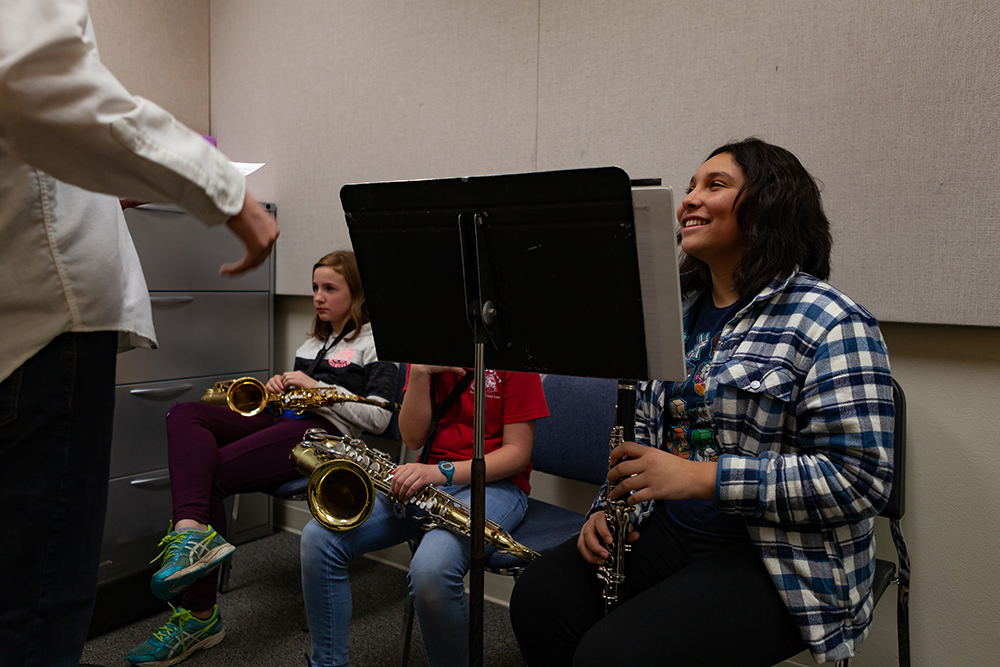 It’s not just for strings anymore.

Like an orchestral piece building its momentum, the strings are being joined by woodwinds, brass and percussion instruments and, eventually, voices. It’s such an ambitious expansion of Pacific University’s String Project that now it’s being called the Pacific University Music Education Project.

The String Project is a successful music education course that draws young people from around the area to Pacific’s Forest Grove Campus for after-school practice and lessons, which are directed by Pacific University students. It started with 12 young students in 2012 and now hosts 140 young people ages 5 and up, said Dr. Dijana Ihas, associate professor of music. If you’ve been in the Taylor-Meade Performing Arts Center on Tuesday or Thursday afternoons, you’ve seen and heard them — young people learning to play violin, viola, cello, double bass and guitar.

Pacific’s String Project, the only one of its kind in Oregon, aims to provide affordable but high-quality music education to young people, including elementary, middle and high school students. The project was honored as the 2018 Outstanding String Project of the Year by the American String Teachers Association.

Now, said Ihas, “We want to expand the opportunity to our band students.”

Starting in February, students from Forest Grove, Hillsboro, Beaverton and Banks started coming to Taylor-Meade on Fridays for band instruction. And when autumn rolls around again, Ihas expects to host a choral program for younger students. The band and choral projects seek to replicate and extend the success of the String Project.

“No other school in the country has that,” she said.

Ihas directs the project, but individual classes are taught by Pacific students, who gain important teaching experience, which is a fundamental part of Pacific’s growing music program.

The university offers two pathways for students interested in music education. A bachelor of arts in music education has long offered a liberal arts approach to the subject, along with the opportunity to add on a one-year master of arts in teaching degree for teacher licensure. Due to changes in teacher licensing requirements, though, music teachers no longer require a master’s degree, so starting this fall, the university also will offer a bachelor of music education degree that includes licensure.

The Music Education Project isn’t just for music majors, though. Current sessions also are being taught by students majoring in optometry and anthropology, for example. They are students who passed a musical audition and are enthusiastic about teaching young people. Their teaching is supervised by Ihas and others on the faculty of the Music Department.

“Working with young children, teaching them to love, appreciate and enjoy creating music — how much better could it get?” said Erin Rothweiler ’18, an art history major who taught cello to String Project students last year.

For Ihas, who grew up in the former Yugoslavia and played viola professionally as the country was riven by war, music performance is an expression of the soul. Just as she played in the renowned Sarajevo String Project through the trauma of war, students in Oregon can feel a sense of liberation and catharsis by playing music, she said.

When she was performing concerts through the three-year siege of Sarajevo, she said, “for the first time, I realized music was not just an addition to life. Music and arts are essential to life.”