May Commencement 2019: Nearly 900 Graduate In Front of Families and Friends 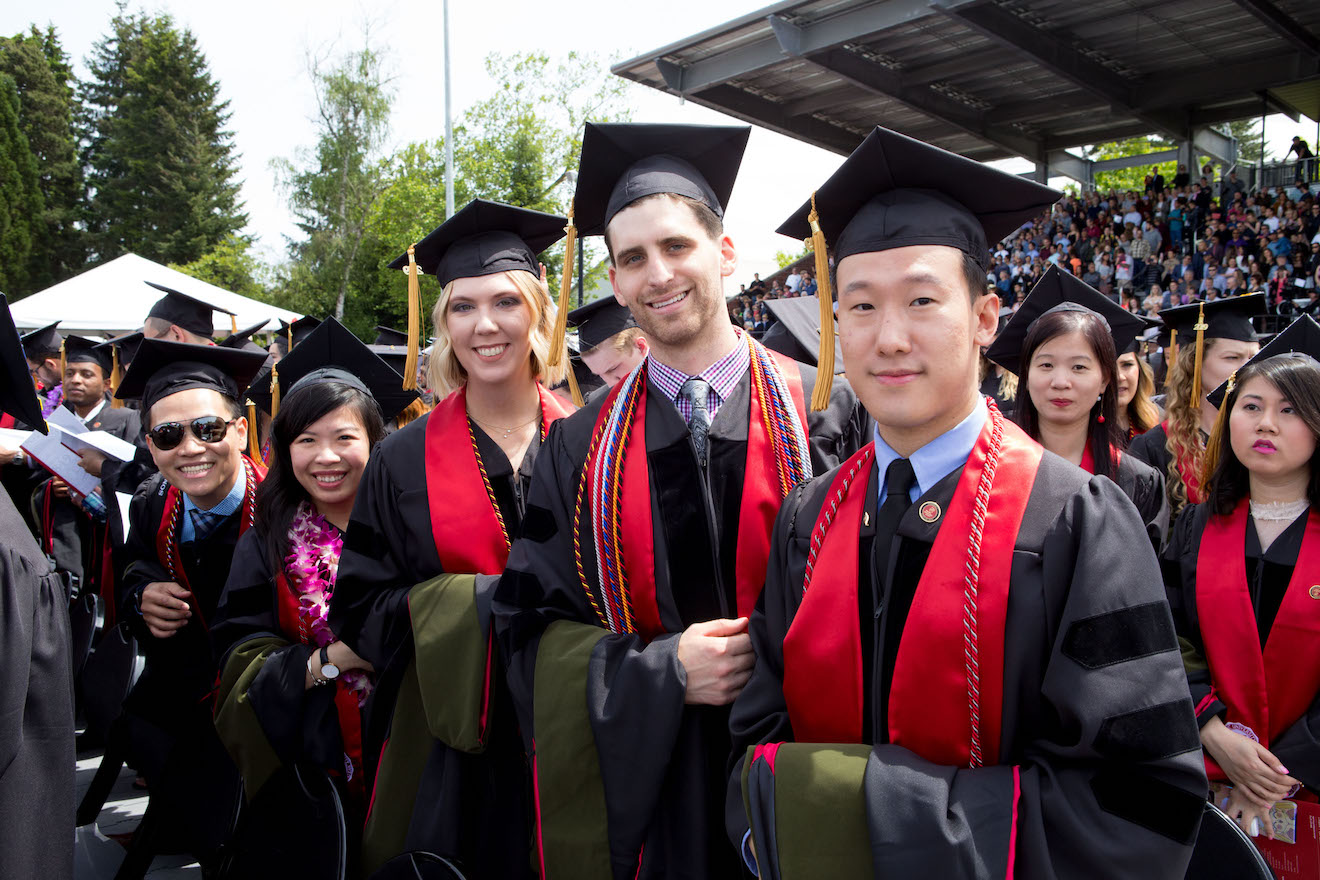 Pacific University conferred degrees on nearly 900 students during its spring commencement ceremonies on Saturday, May 18, amid capacity crowds each exceeding 2,000 at Hanson Stadium on the Forest Grove Campus.

About half of the graduating students received bachelor’s degrees in the arts, sciences, humanities, business and education during the morning ceremony. The other half received hoods and diplomas in the afternoon for earning professional degrees in social work, business administration, speech-language pathology, education and teaching, pharmacy, athletic training, physical therapy and optometry.

During the morning ceremony, Pacific awarded an honorary doctorate of humane letters in to  alumna and longtime university supporter Mary Fair Berglund '58 of La Jolla, Calif., who with her husband Jim Berglund OD '60 and daughter — Pacific trustee Julie Berglund Baker — has played a major role in Pacific's facilities expansion and the addition of its College of Business, which launched in 2013.

“Education is an empowering tool, something that can never be taken away from you," Fair Berglund told the graduates. "It’s all yours, as you choose to use it. It’s your talent, and your knowledge — it’s actually your intellectual property, what economists today call 'human capital.' Congratulations to you all, and thank you to Pacific for this amazing honor.”

Prior to Fair Berglund's acceptance of the honorary degree, valedictorian Charli Ann Elliott of Seattle and music professor Michael Burch-Pesses addressed the Class of 2019.

"Every single experience has shaped us into the people we are today," she said. "The time has come to start crafting our own stories. Chase dreams, chase jobs, chase experiences, chase what makes you happy. Because inside each one of us, a story is waiting to be told. It's up to you to write yours."

Burch-Pesses, now in his 24th year at Pacific, echoed Elliott's plea in telling graduates to pursue what makes them happy. "If you take nothing else from today besides your diploma, take this: To make a difference in the world, it will be essential that you do what you love. There’s a much better chance that you will make a difference if you bring a sense of joyfulness to your work because you love what you’re doing. Yes, you want to have a great career. But having a great career is one thing, and being a happy person is another."

In the afternoon, the university bestowed its ninth annual Kamelia Massih Prize for a Distinguished Optometrist on alumna and faculty emerita Nada Lingel '79, OD '81, MS '88, '00. Lingel served on Pacific's faculty for more than 35 years as a professor and associate dean for clinical education, where she greatly contributed to the cutting-edge knowledge and skills of hundreds of Pacific students by providing them with guidance and resources to advance optometric education, clinical care and community outreach.

The largest contingent of graduates during the afternoon ceremony came from the School of Pharmacy, which conferred doctoral degrees on more than 100 candidates, and also awarded its first master’s degree in pharmaceutical sciences to Heather True PharmD ’18 of Port Orchard, Wash.

Both ceremonies began with a special land acknowledgment message from President Lesley Hallick, who paid homage to the Tualatin Kalapuyas, a Native American tribe indigenous to what is today known as Forest Grove.

“Pacific University has been here for 170 years," Hallick said. "But we are pausing today to remember that this is also the traditional land of Native peoples who were here for thousands of years before us. Pacific began as a school founded by missionaries. Their purposes were both laudable and regrettable — they strove to make education accessible to all, but they also sought to replace Native culture with their own. Over time, we hope to change and grow our relationship with Native tribes whose lands are the home to Pacific’s other campuses.”