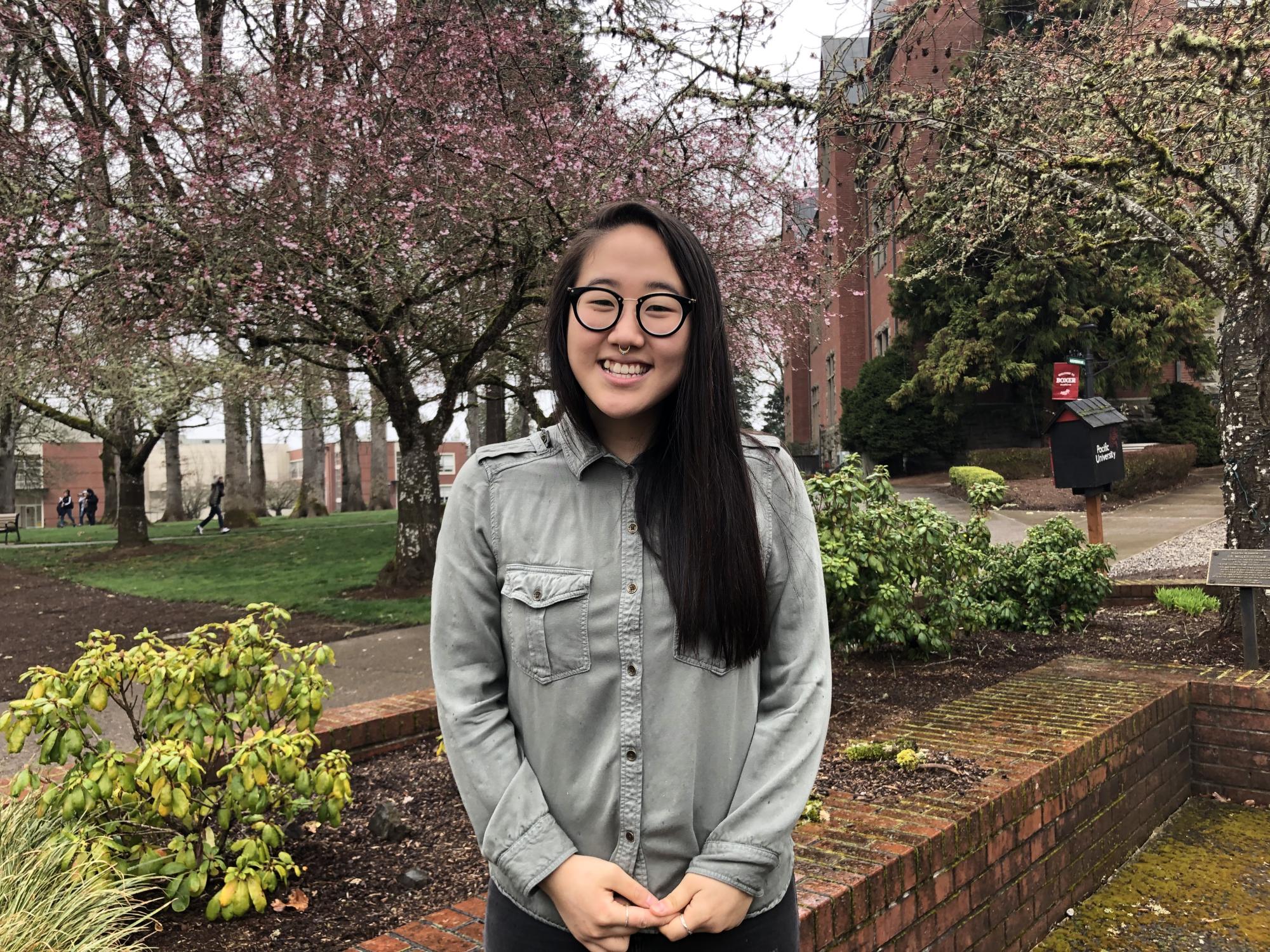 Pacific University senior Tessa Nelson ’19 spent most of January 2019 in India as part of a travel course for her gender and sexuality studies minor.

“It was a really cool opportunity that I didn’t think I could pass up,” Nelson said. “It was the most life-changing experience I’ve ever had."

The only reason the trip was possible was because Nelson received the 2018-2019 Coral Scholarship for her senior year. The Coral Scholarship is awarded each year to one or more students in the College of Arts & Sciences who identify as LGBTQ+.

Nelson was born in Seoul, South Korea, and was adopted by a family from Oregon when she was six months old. Her father died when she was 6, so her mother raised Nelson and her brother, also adopted from South Korea, on her own.

During her freshman year at Pacific, Nelson came out to her mom as bisexual.

“It was kind of hard for her to understand at first,” Nelson said. “So getting this scholarship helped her realize that my identity is valid. It’s been good for our relationship and validating my identity.

“My mom raised us, single parent, and killed it, and I respect her a lot just being able to do that,” Nelson said. “It was an interesting dynamic for me being a person of color and also being queer, but also having culturally a white family. So it’s this weird line of where my identity lies, and something I’ve always struggled with.”

The Coral Scholarship was established by Dawn Holt and Shaun Simpkins to support LGBTQ+ students at Pacific after their son, who came out as gay while in high school, started attending Pacific in 2006.

“We wanted to make sure that he was safe and could grow into a happy, healthy adult, which he has,” Simpkins said. “And Pacific was instrumental in helping him do that.”

“He had a good experience at Pacific, but one of the things we learned is how many parents are not supporting, and how that can impact a student’s education,” Holt added. “We wanted to do what we could to help bridge that gap, and also to lift up Pacific as the very warm, accepting, celebrating place that it is.”

Holt and Simpkins purposely omitted their names from the scholarship to keep the focus on the recipients. Instead, they named it after marine coral, which are an indicator species in nature.

“If the coral is not doing well, it means the environment is not doing well,” Simpkins said. “Society is judged on how it treats the people who are different, and so in that regard, we considered that Pacific’s welcoming of our son as a gay man was a very positive indication of how we want the entire society to be.”

Nelson, too, has found Pacific to be both welcoming and supportive.

“Pacific creates a really inclusive, safe environment, where it wants its students and faculty and whoever to discover who they are,” Nelson said. “If I didn’t go to Pacific, it would have been a lot harder for me to find my identity and talk to my mom and family about it—to understand the challenges that will come with it, but also all of the good things about it too.”

Nelson is a media arts major and gender and sexuality studies minor who balances her studies with a full-time job as a manager at Dutch Bros. Coffee and with volunteer work with a no-kill foster and adoption organization for dogs. After graduation, Nelson hopes to join the Peace Corps for two years and wants to work in marketing, photography or video production for a nonprofit.

“I’ve always wanted to do the Peace Corps and going to India even more solidified wanting to that,” she said. “I think that any impact I can make is good. I want to help make global change.”

Nelson also is engaged with Pacific’s Center for Gender Equity, where she is the social media marketing coordinator.

“The Center for Gender Equity is very intersectional, and we try our best to not only educate Pacific University and make a difference here and provide resources for everybody, but also for the whole community,” Nelson said. “It’s a really great experience and it’s connected me with a lot of amazing people who are on the same mind path as me. We all want to try to make small changes and small differences and try to educate people as best we can and try to be as intersectional as possible.”

That intersectionality is one place that Holt and Simpkins would like to see the Coral Scholarship grow. As they look to the future of their scholarship, their hope is that other donors join them and add to the scholarship—and that the scholarship expands to support other areas of diversity.

For now though, they just hope that their Coral Scholarship sends a clear message that Pacific is a welcoming place.

“It’s a powerful message both to students and the university,” Holt said. “We hope it sends a signal. We know how important it is for the students to be supported.”