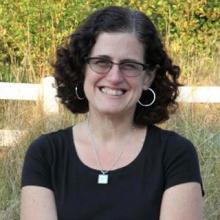 Enie Vaisburd is Associate Professor in film and video at Pacific University Oregon with an emphasis in studies and practice. Her film work is often lyrical, integrating characteristics of experimental and documentary forms. Language, translation, cultural identity and displacement are large themes in her work. Enie is especially interested in creating internal geographies and spaces with film.

Enie was Lead Faculty at the Northwest Film Center in Portland, OR, for more than a decade before starting at Pacific University in 2008. She finds the collaboration with students in creative work very meaningful. She is an award winning filmmaker and also a curator and programmer. Enie has been the lead filmmaker community engagement projects in film, including the “Oregon Latino Video Project”.

Film is a powerful story telling tool. Teaching film requires a love for the subject, a constant investigation, and a refreshed enthusiasm for student work, creative process and vision.  I consider instruction a process of discovery for my students as well as for myself.  I often learn a great deal from this exchange. I especially encourage students to search into their own imagination and to draw their creativity from what they know, from what they want to investigate, from issues that puzzle and intrigue them. It is exciting to see the work grow by developing the strengths, re-examining the weaknesses, rolling with the punches. The process of creative work gives students life-long learning skills of  working collaboratively, perseverance, problem solving and flexibility.

I aim to prepare students to function effectively in a world that bombards them with images, so they will have the tools and the thoughtfulness to create stories with insight and take responsibility for their content. I think it is important to provide media literacy tools so students will be able to decode and construct film language. My production courses include a combination of the technical, the historical, screenings, discussion and critiques.  My theory and history courses usually have a production component. Learning through creating generates a personal connection and a relevance to the material.

Vaisburd is fluent in English, Portuguese, Hebrew and Spanish and has a working knowledge of French. Language, translation, cultural identity and displacement are large themes in her work.